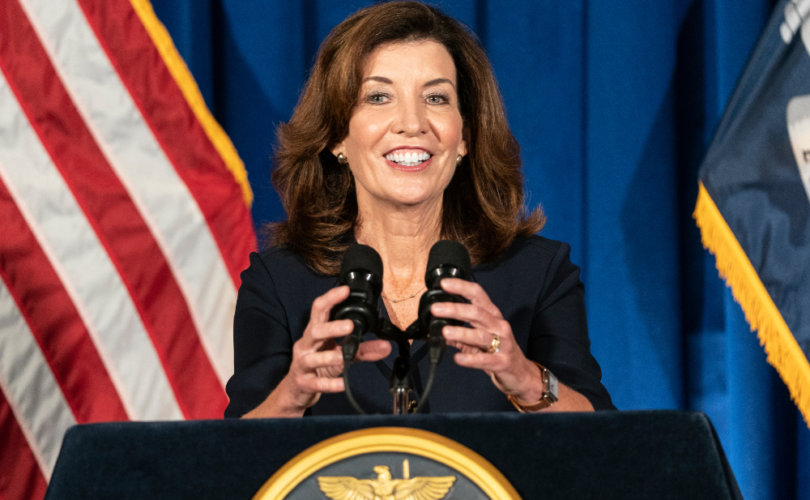 NEW YORK CITY (LifeSiteNews) – Republican candidates for office in the Empire State should move to Florida because “you are not New Yorkers,” far-left Democrat Gov. Kathy Hochul said in recent remarks to supporters that were interpreted as a broader attack on right-of-center residents.

“We’re here to say that the era of [former President Donald] Trump and [gubernatorial candidate and current Rep. Lee] Zeldin and [Dutchess County Executive and House candidate Marc] Molinaro – just jump on a bus and head down to Florida where you belong, okay?” Hocul said to the cheers of her audience. “Get out of town. Get out of town, because you don’t represent our values. You are not New Yorkers.”

New York Gov. Kathy Hochul tells Republicans to "jump on a bus and head down to Florida where you belong…you are not New Yorkers" pic.twitter.com/FazoHqPAZu

Zeldin and Molinaro responded with defiance to the pro-abortion Hochul, who is no stranger to hurling personal insults such as “Neanderthals” at those who disagree with her:

This is reason enough to toss Kathy Hochul out of office November 8. I'm not going anywhere. I'm a lifelong New Yorker, born and raised. I'm going to stay and fight to Save Our State from the continued rule of the most arrogant, power-hungry, elitist Governor in America. pic.twitter.com/xQaGHJvIC9

Totally inexcusable. But so undeniably predictable. Don’t back down. Don’t leave. And don’t get on any bus she’s driving.

Fox News reports that Hochul’s political opponents took her call to be directed at a broader audience than the three named politicians. “Woman who apparently wishes to remain Governor insults millions of New Yorkers for the sin of disagreeing with her,” quipped conservative commentator Mark Davis. “Nice look, ma’am.”

“If you can move beyond the frankly disgusting political partisanship and intolerance, her message is fiscally irresponsible, even dangerous,” writes Empire Center CEO Tim Hoefer in the New York Post. “The governor probably already knows this, but the state’s extensive public sector is heavily reliant on personal income taxes paid by residents, and with nearly $14 billion in projected budget gaps over the next five years, it can’t afford to lose any taxpayers, let alone 5.4 million of them.”

“The Empire State has already lost 1.5 million residents in the past decade, and there’s no sign of that trend letting up,” Hoefer adds. “In fact, more than 350,000 New Yorkers relocated during the 12 pandemic-plagued months leading up to July 1, 2021.”

But while Hochul’s remarks may have been intended as an insult, some conservatives have advocated in earnest that like-minded residents leave solidly-blue states for red or purple ones, both to improve their own quality of life and to either change or fortify the partisan composition of states where their votes can have more of an impact.

Recent years have seen significant migration from Democrat to Republican states. The fruits of this phenomenon can be seen perhaps most dramatically in Florida, where conservative Gov. Ron DeSantis has presided over a shift in residents’ partisan affiliation to the point where registered Republicans now outnumber registered Democrats by 100,000 for the first time in the history of the Sunshine State, which has previously been considered a key swing state.