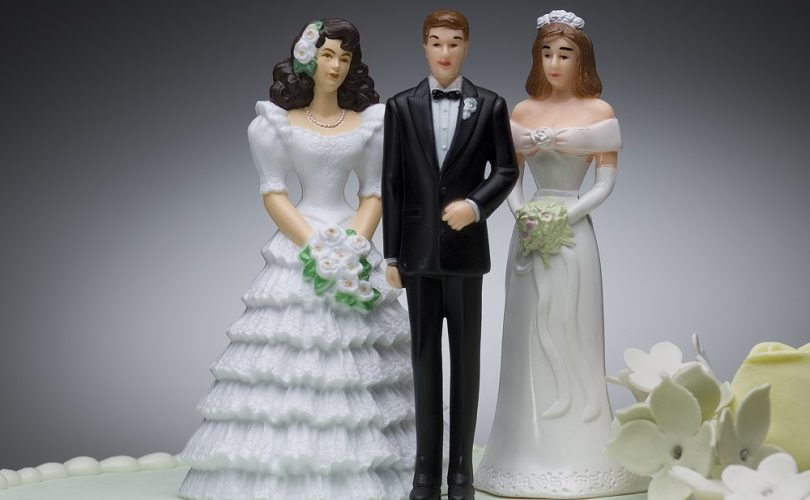 July 3, 2015 (LifeSiteNews) – Motivated by the U.S. Supreme Court ruling legalizing homosexual “marriage,” a Montana polygamist has filed for a second marriage license, so he can be legally wed to two women at once.

“It's about marriage equality,” said Nathan Collier, using homosexual advocates’ term to support marriage redefinition. “You can't have this without polygamy.”

Collier, who has has appeared on the TLC reality show Sister Wives with his legal wife Victoria, and his second wife Christine, said he was inspired by the dissent in the Supreme Court decision.

The minority Supreme Court justices said in Friday’s ruling it would open the door to both polygamy and religious persecution.

“It is striking how much of the majority’s reasoning would apply with equal force to the claim of a fundamental right to plural marriage,” wrote Chief Justice John Roberts.

Collier and his wives applied for a second marriage license earlier this week at the Yellowstone County Courthouse in Billings, a report from the Salt Lake Tribune said.

Collier, who was excommunicated from the Mormon Church for polygamy, married Victoria in 2000 and had a religious wedding ceremony with Christine in 2007. The three have seven children between them and from previous relationships.

“My second wife Christine, who I'm not legally married to, she's put up with my crap for a lot of years. She deserves legitimacy,” Collier said.

Yellowstone County officials initially denied the application before saying they would consult with the County Attorney and get him a final answer.

Bigamy, the holding of multiple marriage licenses, is illegal all 50 states, but Collier plans to sue if his application is denied. Officials expect to have an answer for him next week.

While homosexual “marriage” supporters have long insisted legalization of same-sex unions would not lead to polygamy, pro-life and family advocates have warned all along it would be inevitable with the redefinition of marriage.

“The next court cases coming will push for polygamy, as Chief Justice John Roberts acknowledged in his dissent,” said Penny Nance, president of Concerned Women for America, after the Supreme Court ruling. “The chief justice said “the argument for polygamy is actually stronger than that for ‘gay marriage.’ It’s only a matter of time.”

In a piece from the Washington Times, LifeSiteNews Editor-in-Chief and the co-founder of Voice of the Family John-Henry Westen stated the move toward legal polygamy is “just the next step in unraveling how Americans view marriage.”

Federal judge declares Utah polygamy law unconstitutional
Judge’s ruling that Kentucky must recognize foreign gay ‘marriages’ may open door to polygamy
Former ‘sister wife’:  Polygamy was ‘like living with adultery on a daily basis’
Polygamy comes out of the closet
Gay ‘marriage’ will never, ever, ever lead to polygamy (unless it does)
Washington Post faith reporter asks, ‘Why is polygamy so problematic?’
‘Marriage equality’ means legalized polygamy too: Slate columnist
Justice Sotomayor and the path to polygamy
Judge’s ruling puts polygamy on the way to legal recognition