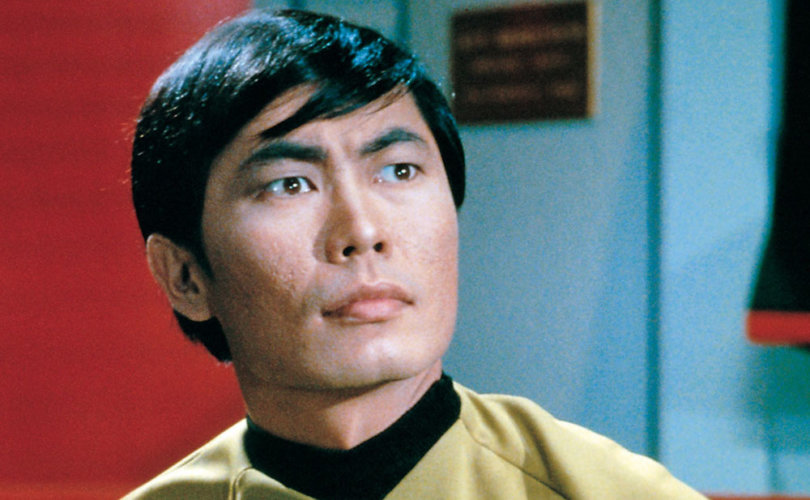 HOLLYWOOD, July 8, 2016 (LifeSiteNews) – The homosexual actor who played Star Trek character Hikaru Sulu on TV and in film is unhappy the latest movie makes the character homosexual, even though the writers intended it as a tribute to him.

“I think it’s very unfortunate,” the original Sulu, George Takei, told the Hollywood Reporter, adding that he felt it sent the wrong message about sexuality, that a person could be homosexual at one point in his life and heterosexual in another.

Takei revealed he had told both Pegg and the new movie’s director Justin Lin he wanted no such tribute. “I told him, ‘Be imaginative and create a character who has a history of being gay, rather than Sulu, who had been straight all this time, suddenly being revealed as being closeted.’”

So embarrassed is co-screenwriter Simon Pegg, who also plays Scotty in the series of remakes, that he issued a formal statement, even resorting to the shakey multiverse theory to argue there was room for both his storyline and that preferred by Takei.

“I have huge love and respect for George Takei, his heart, courage and humour are an inspiration,” Pegg stated. “However, with regards to his thoughts on our Sulu, I must respectfully disagree with him.”

The controversy emerged in Australia, where current cast members were promoting the show in advance of its release later this month, and actor John Cho, who plays a younger Sulu than portrayed by Takei in the original TV series, revealed his character has a same-sex partner in the film as well as a child by him.

But Takei was displeased, partly because the character twist messed with the original conception of series originator Gene Roddenberry. He told the Hollywood Reporter, “I’m delighted that there’s a gay character. Unfortunately, it’s a twisting of Gene’s creation, to which he put in so much thought.”

Pegg concluded his statement with reference to the multiverse theory. “Our Trek is an alternate timeline with alternate details,” he wrote. “Whatever magic ingredient determines our sexuality was different for Sulu in our timeline. I like this idea because it suggests that in a hypothetical multiverse, across an infinite matrix of alternate realities, we are all LGBT somewhere.”

The strange controversy prompted Gizmodo.com reporter Katharine Trendacosta to comment: “Honestly, the weirdest part of this story is that it was announced that this was in honor of Takei, who desperately didn’t want it. It’s a weird way to give a nod to one of the original cast members.”

The multiverse theory is used by evolutionists and other proponents of a naturalistic universe to explain such things as the apparent “fine tuning” of many attributes of the solar system that make life possible.  Cornelius Hunter of the Discovery Institute wrote in an April 1, 2011 blog, “This multiverse allows evolutionists to overcome the low probabilities of this world, such as the fine-tuning of nature and the evolution of life. Astronomically unlikely events don’t matter if you have an astronomical number of chances.”

Star Trek’s Sulu portrayed as gay in upcoming movie
George Takei: Clarence Thomas is a ‘clown in blackface’ for saying slaves had dignity