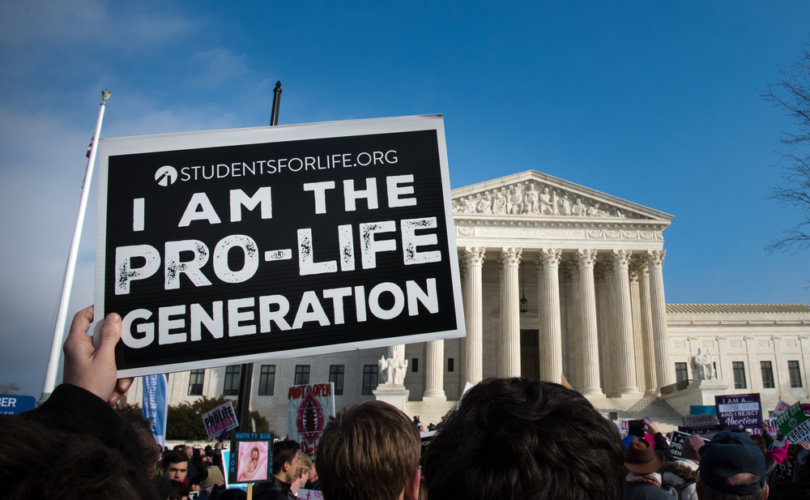 WASHINGTON, March 2, 2021 (LifeSiteNews) — The tiny, unofficial March for Life (in lieu of the canceled official march with hundreds of thousands of pro-lifers) happened over a month ago, but its lessons linger.

To recap: There was an official, online, livestreamed March for Life to mark the Supreme Court’s Roe v. Wade decision of 1973, arranged in the face of the coronavirus crisis and the changeable lockdowns affecting vast swathes of the United States. But there was also a small, scattered parade of about 600 pro-lifers who insisted bringing the pro-life message to the Capitol live and in person.

Fr. Alan Wharton of the Franciscan Friars of the Immaculate was among them. He interviewed a number of people at the small rally on video, and the recording was subsequently sent to LifeSiteNews by Cape Cod Bus for Life.

Pacelli Pujals, one of the people interviewed by Fr. Alan, came from the Chicago area with his wife Mary Therese and daughter Mary Grace Faustina. They were accompanied by Pacelli’s sister Maria Pujals Fernandez and Mary Grace Faustina’s young friend Dasha, who has begun a pro-life club at her school.

Pacelli said his sister first brought him to the March for Life when he was a kid. Then, after he married, he went many times with his family. He credited his Cuban-born father with impressing upon him the importance of “never folding” in the face of adversity.

“We escaped communism, the intrinsic evil of Marxist-Leninism in Cuba,” Pacelli explained. “My dad was very adamant that we left because of the atheist system.”

When Pacelli went back to Cuba one day with his parents, he saw the church in which they had been married. His father told him that the church had always had an outdoor procession to celebrate the Feast of Christ the King. After the Communist revolution was underway, however, that changed. Pacelli’s father told him that the Catholic Church decided to cancel the march.

When Pacelli’s sister Maria, who lives in Massachusetts, told him the night before that she wasn’t coming to Washington, D.C., this year, he begged her not to “fold.” Inspired, she jumped into a plane to Chicago, and her brother and sister-in-law picked her up at the airport. The next day they drove for 14 hours the nation’s capital.

Pacelli Pujals shared more advice from his faith-filled father. “He told me how to live under Marxist-Leninist doctrine, under the atheist system,” Pacelli said.

His wife Mary Therese said that she thought the cancelation of the official March for Life was sad.

“I think it’s sad because we have to always be a witness of truth,” she told Fr. Alan. “The truth is the babies need us; the mothers need us. So COVID, or no COVID, or whatever’s going on in the world, we still need to peacefully march, peacefully express the truth with love.”

— Article continues below Petition —
U.S. Senators: Don't use new relief bill to fund abortion!
Show Petition Text
8837 have signed the petition.
Let's get to 9000!
Thank you for signing this petition!
Add your signature:
Show Petition Text

The wife and mother said also that their group was representing those who couldn’t be in D.C. that day.

Mary Grace Faustina told the interviewer that she had come to the March every year since she was four and thought she still needed to go, even if the official March had been canceled.

“We still need to go ’cause we’re the pro-life generation, and our generation has to show that we’re out there,” she said. “And we have to support life.”

Fr. Alan also interviewed Monsignor Patrick Winslow of Charlotte, North Carolina, who had come to the Capitol with a dozen seminarians and priests.