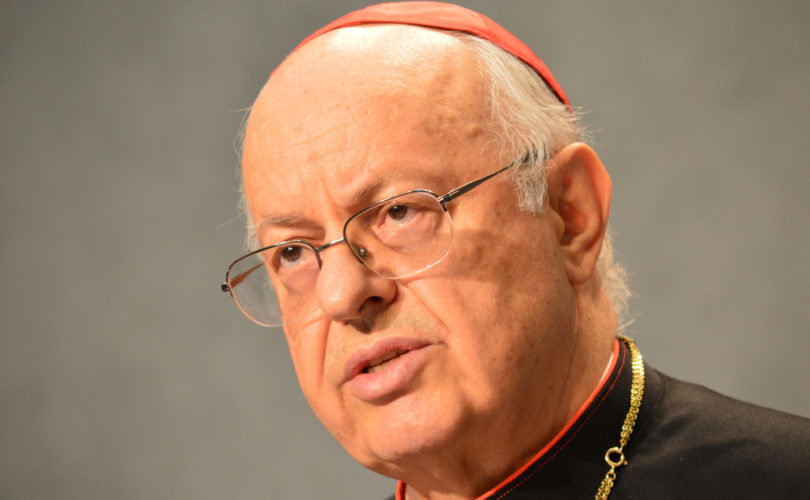 The Cardinal noted there would be 191 speakers with only four minutes each to make their remarks.  The list of speakers includes 61 cardinals, one cardinal patriarch, 7 patriarchs, one major archbishop, 67 metropolitan archbishops, 47 bishops, one auxiliary bishop, 1 priest and 6 religious.

Speakers were asked to submit their remarks prior to the Synod. However, none of the texts are to be made public.  When the press conferences take place, while some of what was said will be transmitted, the public will not learn who said what.

There were several complaints from journalists about the new rule, which many said demonstrates a lack of transparency.  Frustrated by repeated pointed questions about the matter, Cardinal Baldisseri replied to another reporter who pushed on the matter, “You should come up here if you know everything, maybe you should be a Synod Father.”

In explaining the decision, Cardinal Baldisseri said that the Pope wanted the Synod Fathers to have ‘freedom of expression’ and that they should be free to divert from their prepared remarks.

He also noted that should the Synod Fathers wish to give interviews with the press they are free to do so and thus make their positions publicly available.

The Extraordinary Synod will commence Sunday with a Mass celebrated by Pope Francis in St. Peter’s Basilica.

Father Thomas Rosica, English-language spokesman for the Extraordinary Synod and a participant, told LifeSiteNews that this Synod will be more transparent than others in the past because the Vatican is launching a special website for the event with video interviews, documents, and other materials. He also said that the texts that will be read during the Synod will mainly summarize the results of the pre-Synod questionnaires from each of the Synod Fathers' dioceses.