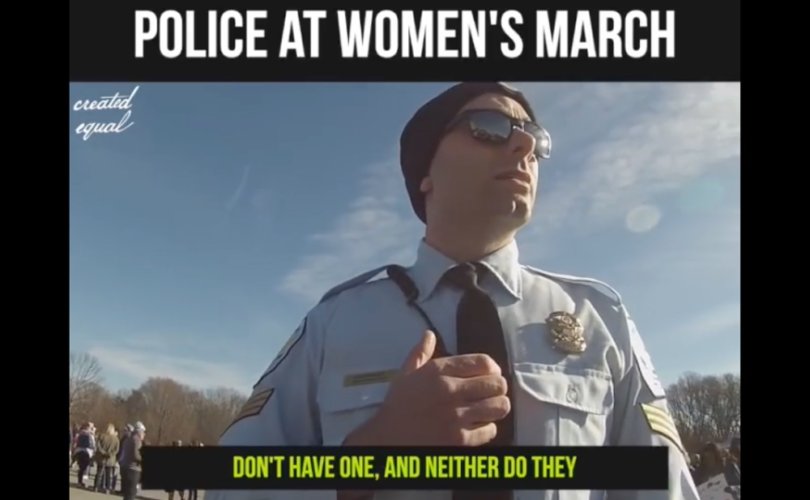 WASHINGTON, D.C., February 22, 2018 (LifeSiteNews) – A group of about 90 pro-life college students respectfully stood their ground at the pro-abortion Women's March in Washington D.C. last month as police officers attempted to relocate the group to what they called the “First Amendment free speech zone.”

A video of the encounter between the pro-lifers and the police is essentially a how-to manual for pro-life advocates on standing their ground with police, says its creator Mark Harrington.

The national director of Created Equal, Harrington’s video captures his encounter with Sergeant Coler of the U.S. Park Police at the January 20 Women’s March in the nation's Capitol.

Created Equal’s team was present at the Women’s March to show the reality of what so-called “choice” looks like. The students held signs showing preborn victims of abortion as well as mothers who have died following complications from legal abortion.

Created Equal, which is based in Columbus, Ohio, has been operating for seven years, and its mission is “to raise up the next generation of leaders to go on to college and high school campuses and debate and dialogue with students,” Harrington told LifeSiteNews.

“We also go to these big events because we believe our side needs to be represented even in the most hostile of situations,” he said.

“We support law enforcement, we’re very, very pro-law enforcement generally,” Harrington added. “And for the most part, police are fair in dealing with us. But on certain occasions, they’re not so fair, and this case was one of them. And in those cases, we just don’t back down.”

In this encounter, after Harrington admits he has no permit, Coler tells him he has to relocate to the “First Amendment free speech zone.”

Harrington said that his permit was “the First Amendment of the Constitution of the United States.”

When Coler asks how many are in the group, Harrington estimates 90.

“So that’s a shame, because according to 36-CFR, anything above in the number range you’re talking about, you need to have a permit to demonstrate,” Coler says.

“Here, let’s cut through this crap. If we don’t move, what’s going to happen? You gonna arrest us?” Harrington asks.

The incident ends with Coler telling Harrington he spoke to March organizers, who agreed the Created Equal students could stay where they were, “as long as you’re not disruptive.”

Harrington told LifeSiteNews that he produced the video because pro-lifers need to know that if they stand firm and know the law, police “generally will capitulate, or at least try to find some kind of a compromise.”

“Normally, they don’t want to arrest people so if you get them to basically that point they generally will figure out another way,” he said.

The Bible prescribes the most effective response to belligerence and animosity, he told LifeSiteNews.

“It says a kind word turns away wrath. We train our staff and students to keep the emotions aside, and try to deal with people on a level head, and be civil, despite the fact that they might be yelling, screaming and cussing at us, and even threatening us.”

“At least half the time, even when they’re yelling at us, by the time we’re done, they’re not yelling at us,” Harrington said with a laugh. “That’s an advantage.”