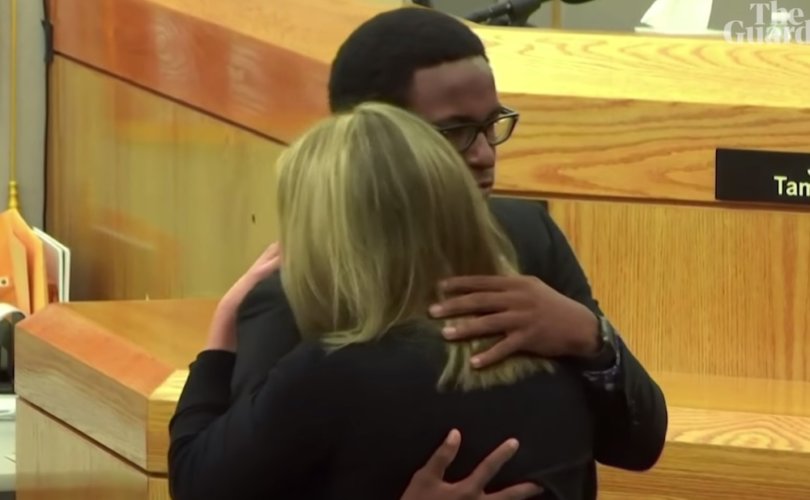 DALLAS, Texas, October 3, 2019 (LifeSiteNews) — In an incredible display of human compassion, a young man whose brother was shot and killed forgave the cop who had been found guilty of his murder.

Former Dallas police officer Amber Guyger shot and killed an unarmed man in his apartment, claiming that she had mistakenly thought she was entering her own apartment located one floor below and had encountered an intruder.

After Guyger, 31, was sentenced to ten years in prison for the death of Botham Jean, the judge permitted his brother, Brandt Jean, to address Guyger in the packed courtroom.

What came out of the young man’s mouth stunned those present and has captured the attention of the entire nation.

He spoke deeply from his heart.

“I forgive you,” said Brandt Jean, “and I know that if you go to God and ask Him, He will forgive you.”

“I’m speaking for myself and not behalf of my family, but I love you just like anyone else,” said the young man.

“I’m not going to say I hope you rot and die just like my brother did, but I personally want the best for you.”

“I don’t even want you to go to jail,” he declared. “I want the best for you because I know that’s exactly what Botham would want you to do … and the best would be:  Give your life to Christ.”

After wiping away tears, Brandt Jean turned to the judge and asked, “I don’t know if it’s possible, but can I give her a hug please?”

Amber Guyger sentenced to 10 years in prison for the fatal shooting of Botham Jean. After her sentencing, his brother forgave her and embraced her. https://t.co/xIExvp4qsl pic.twitter.com/eVUuwyiMky

The two then met and embraced in the center of the courtroom. Guyger, fell into Brandt Jean’s arms and sobbed as he spoke into her ear.  She clearly did not want to let go of the man who had just lightened her heavy burden of guilt.

“The feeling in court changed in that moment,” said a TV journalist who was present in the room.

“This trial was tragic, salacious, raised questions about police practices, and has received attention worldwide,” noted the Fox4 reporter.  “But in that moment, everyone was humbled, watching a teenager forgive the person who killed his brother.”

Perhaps inspired by Brandt Jean’s Christ-like forgiveness, Judge Tammy Kemp retrieved her own Bible from her chambers and gave it to Guyger.

“You can have mine. I have three or four more at home,” said Judge Kemp. “This is the one I use every day.”

According to Fox4,  Judge Kemp then guided Guyger through accepting Jesus Christ into her life.

The two prayed together, and during that time, Guyger did just as Jean's brother said he would have wanted, asking for salvation there in the courtroom.