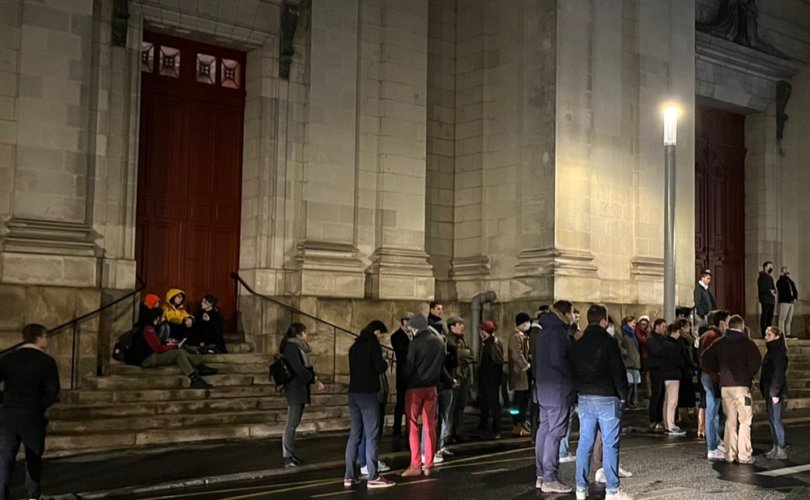 NANTES, France (LifeSiteNews) —Around 200 young Catholics blocked the entrances to the church of Notre-Dame de Bon-Port in Nantes, in the west of France, on Tuesday evening, leading to the cancellation of a “post-metal” organ concert by Anna von Hausswolff, a Swedish artist who specializes in morbid music and videos with clearly satanic overtones.

Another concert by von Hausswolff, meant to take place this Thursday evening in the Parisian church of Saint-Eustache, was also called off by the organizers when rumors of a similar demonstration began to circulate on social media.

The story of this victory won by faithful young French Catholics reveals a severe lack of prudence and judgment, to say the least, on the part of the Church authorities who seem to have been happy to open the sanctuary doors to a controversial artist.

It was only last Sunday that the faithful of Saint-Clément parish in Nantes – where the Priestly Fraternity of Saint Peter celebrates the Tridentine Mass – became aware that the cultural association Le Lieu Unique had reserved the parish church for Anna von Hausswolff’s organ concert. The organization said that this was part of a “partnership” that has existed for several years with the diocese via another association called “Sacred Music in the Cathedral.”

Some quick research allowed these Catholics to realize the artist has an obsession with death and human sacrifice – one of her videos, “Deathbed,” includes a repulsive, realistic scene in which a young man’s beating heart is cut out of his chest to obsessional organ chords and blasphemous words. Many of her video clips center on blood, death, and graves, suggesting “black masses more than anything else” according to “Christianophobie.fr,” a Catholic blog.

Von Hausswolff, who is touted as a talented organist, composer, and author, has written titles such as “Funeral for My Future Children” (“I’ll bury all my children / I’ll carry them to death / Oh, to linger in their stories / Exhausted by their weight / My milk is gray and bitter but I’ll carry them each day /To that day, woah woah…”), “Ugly and Vengeful,” and the suicidal “Gloomy Sunday,” all orchestrated in a dark, disturbing combination of electro music, percussion, and pipe organ.

In “Pills,” she sings of drug addiction: “These pills keep me alive / This process needs, possession from me,” and the lyrics end with the compulsive repetition of the phrase: “I made love with the devil.” The words could hardly be clearer, but the French mainstream media, condemning the cancelling of her concert in Nantes, said they were “metaphorical.”

The Catholic community of Saint-Clément was deeply shocked by the upcoming concert and immediately wrote to the bishop of Nantes, Laurent Percerou, and to the diocesan parish priest of Saint-Clément, Fr Hubert Vallet, who is in charge of relations with “Traditional Mass” Catholics.

The latter answered that he had “somewhat blindly trusted the Lieu unique, “confessing” that he had been “negligent” and that he “bitterly regretted having given authorization” for the concert. While he “did not dispute that the artist was not very recommendable,” he added that he could not see himself “cancelling the concert from one day to the next” and that he did “not think it was sacrilegious.”

“I don’t plan to do a ceremony of reconciliation. In fact, I don’t consider it a desecration, or I wouldn’t accept it. This concert has already been performed in churches and cathedrals, it may not be spiritually nourishing, but it is not a desecration,” he repeated.

In his letter, Vallet noted that the concert was to take the form of an instrumental performance with light effects and added that, having arrived at the parish in September, he hadn’t had the “elementary curiosity” of looking at the artist’s personality and works. In addition, he did not want to interfere with the authorization given last year for her concert, which was postponed because of COVID restrictions.

Whether Hubert Vallet regretted his stance out of piety or for other reasons, permission to use Saint-Clément for the concert was retracted by the parish on Monday, to the satisfaction of the faithful who thanked the priest for his decision on social media.

However, the show was simply displaced to another venue, the parish church of Notre-Dame de Bon-Port in Nantes.

On Tuesday, a statement by the diocese of Nantes, unsigned, explained:

In September 2021, the new parish priest, trusting in the decisions made before his arrival, signed the agreement with “le Lieu Unique“, which regularly collaborates with the diocese (Sacred Music in the Cathedral).

On Monday, December 6, parishioners of Saint Clément asked the parish priest about the content of the concert. A quick review of the artist’s titles shows that she evolves in the world of “contemporary music.” Her performance is more aesthetic than spiritual, even if the titles of her songs, between light and darkness, show an existential quest – as expressed in their own way by the psalms in the Bible –“My place is among the dead, with those who have been killed, buried, those whom you no longer remember, who are excluded, and far from your handMy couch is among the dead,like the slain who lie in the grave.You remember them no more;they are cut off from your influence.” (Ps 87).

Given the very short time frame and the commitment made with “le Lieu Unique”, the decision was made to maintain this concert. It is a one-hour organ concert, without text, projection or choreography, quite sober and in which nothing is opposed to faith and morals. It will take place at Notre-Dame de Bon Port.

The reactions provoked by this event encourage us to re-specify the terms of the ordinary discernment prior to welcoming cultural events in the churches of the diocese, in consultation with the parish priests.

The answer was confusing: why was the concert scrapped in Saint-Clément if there was nothing wrong with it, and why was it moved to Notre-Dame de Bon Port if there was?

At any rate, before the doors of the church could open to the 370 people who had bought tickets for the performance, dozens of young Catholics blocked all the entrances to the church, loudly singing “Hail Marys” and standing their ground when the public started to show up.

Fearing a “security risk” the organizers decided to cancel the event.

Interestingly, no police forces were to be seen near the church during the peaceful, if vocal, demonstration.

A spokesperson for the municipality of Nantes, Aymeric Seassau tweeted his disapproval: “A handful of fundamentalists has succeeded in preventing a concert.” Olivier Château, “heritage assistant” of the socialist town council, condemned what he called a “miserable show of intolerance and harm towards cultural expression.”

The event triggered negative comments in many mainstream French media, speaking from a secularist viewpoint.