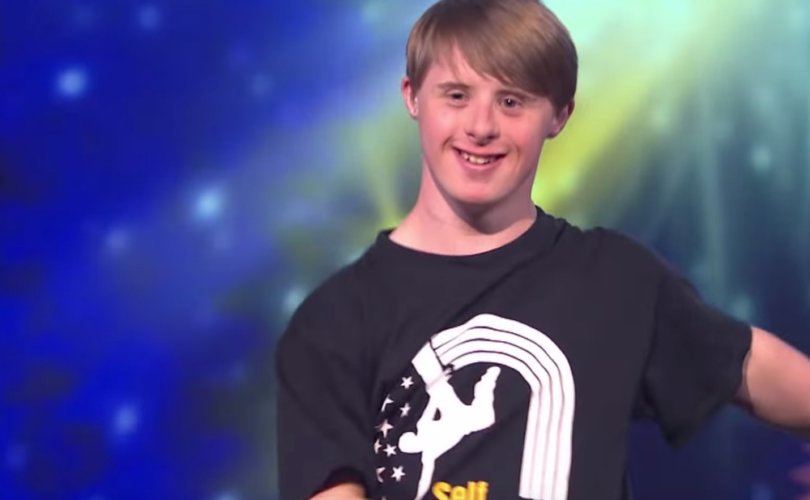 Andrew Self on 'The Greatest Dancer'

BIRMINGHAM, England, January 9, 2019 (LifeSiteNews) ― A young man with Down syndrome won a standing ovation when he auditioned for a national dancing competition.

Andrew Self, 21, appeared in the first episode of the UK’s “The Greatest Dancer,” and brought both judges and audience to tears with his audition piece, a joyous celebration of Justin Timberlake’s 2016 hit song, “Can’t Stop The Feeling.”

Self’s mother accompanied him to the audition and in a pre-audition interview said that her son first showed an interested in dancing when he was 11.

“He really got into Strictly Come Dancing [a British talent show],” she explained. “It just made him so joyful, and that’s what started him on his love of dance.”

There is some loving joking between Self and his mother before the show, the dancer gleefully boasting, “It’s all about me now, Mum.”

“Is it? It always is about you,” she counters.

When Self’s mum advises him what to do if he falls down, the young man mimics shock at the very idea.

“I’m a balanced boy,” he protests, “like Billy Elliot.”

Billy Elliot is the eponymous hero of a film about a boy from a mining community in northeast England who dreams of becoming a professional ballet dancer. Although Billy Elliot had a hard time convincing his widowed father to let him dance, Andrew Self’s number one fan is clearly his mother.

“Andrew can hear a piece of music, and he can just translate it into movement,” she said. “It’s transformed his life.”

“Having Down syndrome, it doesn’t stop me from doing anything,” Self said in a pre-audition interview.

In this competition, the latest produced by Simon Cowell, dancers perform in a closed studio, watched by an audience via video. If 75 percent of the audience votes for the dancer, a mirrored wall opens to review the live audience and three judge “captains.”

Self’s delight when the mirrors open is palpable, as is the joy of his best friend Tom, who also has Down syndrome. Self’s audition won him a spot in the callback round.

Glee veteran Matthew Morrison, a judge captain, told the young dancer that he was inspirational.

“I just have to say that I think you’re going to inspire a lot of people with the performance that you just gave today,” he said.

It may even save some lives. Around 90 percent of babies diagnosed with Down syndrome in the womb are aborted in Great Britain and the United States, in part because of misunderstandings about the condition. In 2014, Oxford biologist and professional atheist Richard Dawkins told his followers that he thought giving birth to children with Down syndrome was “immoral.” However, according to the National Down Syndrome Society, most people with Down syndrome are healthy, and with help they are capable of “leading fulfilling and productive lives.”

A frequently cited survey states that 99 percent of people with Down syndrome are happy with their lives.