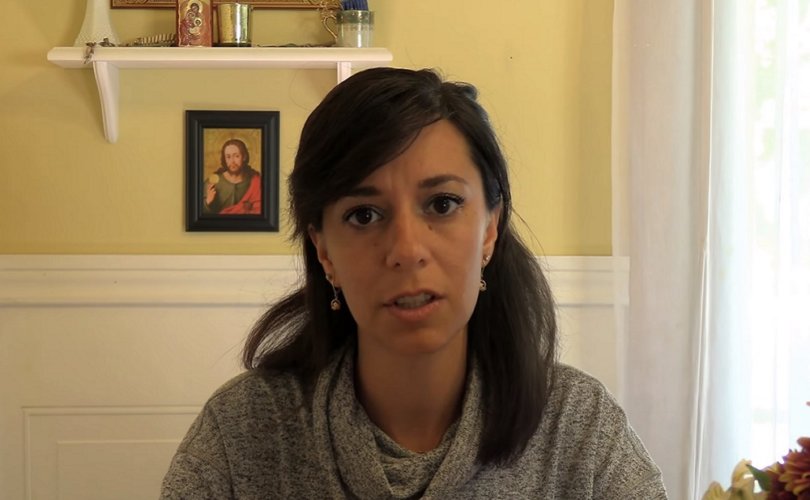 September 24, 2020 (LifeSiteNews) — A wife and mother urged priests and bishops to defend the Church — to “rise up in your manhood, [and] lay down your life for us.” The young Catholic woman, whose name has not been revealed, released her video in response to criticism of Fr. James Altman’s strong rebuke of Catholics who vote for pro-abortion Democrats.

“The unity of Christ and the Church, head and members of one Body, also implies the distinction of the two within a personal relationship,” the Catechism of the Catholic Church explains. “This aspect is often expressed by the image of bridegroom and bride. The theme of Christ as Bridegroom of the Church was prepared for by the prophets and announced by John the Baptist.”

The wife and mother began her video with a story of a friend “who is diagnosed with aggressive cancer. She’s a bride, a mother, a great figure in the community. She saved a lot of lives herself, that’s kind of the business that she’s in, and it’s kind of the glue that holds everybody together.”

“Her family was trying to make heads or tails of the diagnosis, spent a lot of time getting second opinions and, you know, dialoging, meanwhile the cancer got worse, and it was inevitable that surgery needed to happen, and it needed to happen fast,” she continued. “It was such a rare and aggressive illness; the most specialized surgeon that they could find ironically was her husband, and he wouldn’t do the surgery.”

“I don’t know why,” she said. “We were all devastated. It was awful. How could you do that? How can you not get in there and do the surgery? Your bride is dying before your eyes! I don’t know if he was scared, or something to do with his status at work, you know. He justified it, like, it was so far gone, really it would be useless for him to go in and operate.”

“Everybody else kind of was just dumbfounded. Didn’t you take vows to lay down your life? Wouldn’t it be worth it to try your hardest, even if it only meant giving her a few more months to live? She’s your bride!”

In the video, the wife and mother proceeded to explain that her story was a parable for what’s happening to the Church. “I’m the bride,” she said, “we’re all the bride. We, the laity, the Church, are your spouse, dear fathers, dear brothers, dear husbands of the Church.”

“We are begging you right now to act like husbands, to rise up under moral obligation, and to take your bride who is battling a vicious brutal disease that threatens death, take her to the hospital. Would you not do everything in your power to try and save her, even if it meant losing status or the opinions of others, or getting pushed off of boards, or being threatened with priest prison? Would it be worth it?”

“Maybe the real question is,” the video continued, “are we worth dying for? The Church, your bride, your spouse? Are we worth giving up some of those worldly comforts, some of your safety nets? Your head hit the marble at your ordination, you laid bare everything for your bride. You said, ‘Here I am. I’m laying down my life for you as a sheep led to the slaughter.”

The young Catholic woman who created the video emphasized how laypeople “are horrified” by the fact that priests and bishops are letting “their children be attacked and starved.”

“You are not as deficient as Adam,” she said, referring to the fall of man in the Garden of Eden. “You have god in your hands every day. You have nothing to fear. So where are you, husbands of the Church? Where are you?”

She lamented that only roughly a quarter of Catholics believe in the real presence of Christ in the Eucharist, and blamed “the preaching,” which isn’t “stirring up any valiant response on our part.”

Unlike the Church fathers, who “raised up a generation of martyrs,” the current generation of Catholics, both the hierarchy and the laity, is more “lukewarm.”

The woman stressed the importance of boundaries set by priests for the faithful, just as parents set boundaries for children so they can be successful in life.

She referred to priests and bishops in the time of the Protestant revolution, as well as during the time of the Cristero War in Mexico in the 1920s. These priests essentially said, “I’m called to be a husband, and manhood requires action. … My bride is being attacked. My children are being starved.”

The video mentioned Fr. James Altman of the Diocese of La Crosse, Wisconsin and Bishop Joseph Strickland of Tyler, Texas as modern examples for members of the hierarchy who fight for the faithful and defend the Church.

“This is our message to you, dear husbands of the Church,” she concluded, “from your bride, your spouse: get in there and do surgery while there’s still time. We are praying for you daily. We intercede for you, we offer sacrifices for you — but you are the ones that have to do the action.”

Jesus Christ “is calling you to follow him up Calvary. Will you go with him, or will you walk away like the rich man who couldn’t bear to leave behind his worldly comforts, his sweet parish, his status, the opinion of his friends who didn’t want to be ostracized? You were called to priesthood for a reason!”

“The cross is not something to shy away from. The cross is harsh, and it’s exactly what we need right now. We need you to embrace it and know that you have nothing to fear, only your crown to gain. You’re in this age, in this year, this time, this place, this parish that you’re at — you’re here for a reason: because God needs you!”