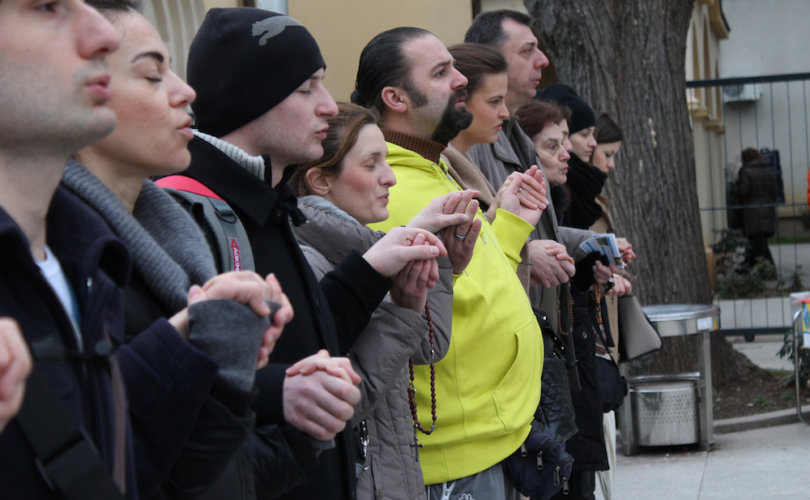 Pro-lifers gather to pray in Croatia.

March 30, 2017 (LifeSiteNews) — Despite a recent Constitutional Court decision to uphold the abortion laws in Croatia, a youth movement is springing up that’s advancing the culture of life in the former Communist-ruled country.

Ante Calijkusic, the chief organizer of 40 Days for Life in Croatia, is confident, based on the numbers of young people becoming involved in events throughout the nation, that this generation will lead a movement that rejects the culture of death.

“There are thousands of youth who have taken part in 40 Days for Life and hundreds who are volunteers along with others,” Calijkusic told LiteSiteNews. “The youth are truly fantastic and are up at 6 a.m. all throughout Lent praying in front of hospitals. We are so grateful to the Croatian Bishops and many priests who have supported this lay initiative. The doors of many churches have been opened to us and we estimate that some 500,000 people have heard about this initiative at Mass.”

“Some of our Bishops have also joined us in prayer in front of hospitals,” he continued. The ‘New Evangelization,’ which we often hear about, has come alive through 40 Days for Life. Our visible presence — as a sign of God's love and hope for people in places consumed by sorrow and fear — in places where innocent human beings are being killed has yielded beautiful and positive results.”

Calijkusic and his 40 Days for Life group have produced an album for the unborn — the first of its kind in post-Communist Croatia — that has seven songs and three prayers. They currently are working on a documentary and have launched a program called “Liberated by Forgiveness” aimed at helping to heal the wounds caused by abortion.

But he cautioned that the Croatian national media produce ‘fake news’ about pro-lifers and continue to agitate for the pro-choice side.

“They proclaim a false freedom without responsibility,” Calijkusic said. “They lie to the police about our work and produce fabricated indictments. However, through social media, we spread the truth and our message of God’s love for all. We are working with 40 Days for Life groups in other European nations (Slovenia, Bosnia-Herzegovina) and we are growing rapidly and daily.”

A massive turnout is expected for Croatia’s March for Life on May 20.

“It will show the world what a small but faith-filled new nation, which has borne much suffering but remained faithful to Christ and His Church, can do,” Calijkusic said. “These Catholic Croatians are living  the words of St. John Paul II when he, along with Synod Fathers, called upon the leaders of Europe drafting the new European Constitution to keep God’s name:”

“Raise your voices in the face of the violation of human rights of individuals, minorities and peoples, beginning with the right to religious freedom; pay utmost attention to everything that concerns human life from the moment of its conception to natural death and to the family based on marriage: these are the foundations on which our common European home rests. … ”

St. John Paul II visited Croatia three times and had great love for the people and nation. There is hope that Croatia will continue to lead the way along with Hungary, Poland, and Slovakia to restore a new Christian Europe, whose soul is dying in the midst of a demographic winter.

1
The simple reason why you should stop using Gmail
2
Prophecy: War will break out in Europe after Pope visits Moscow
3
FBI raids home of Catholic pro-life speaker, author with guns drawn as his terrified kids watch
4
Pro-life Catholic father Mark Houck pleads not guilty to federal charges after FBI raided his home
5
Tucker Carlson: Biden admin ‘may have blown up’ gas pipelines in Baltic Sea
Subscribe to Daily Headlines »