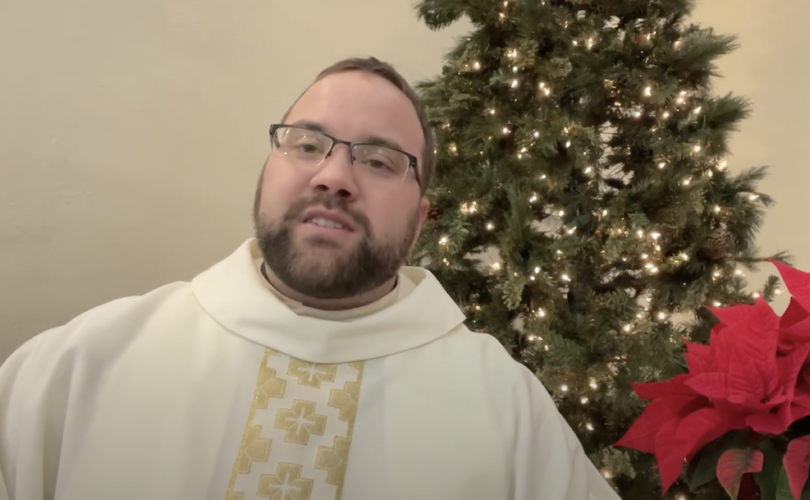 GREEN BAY, Wisconsin (LifeSiteNews) — A 33-year-old priest who was recently hospitalized with heart problems shared that his cardiac issues began the day he got jabbed.

Fr. Edward Looney recently posted a 25-minute video titled “My Heart Issues Began When I Got Vaccinated,” where he detailed his nearly two-year long battle with heart issues since he first took the COVID jabs. He said he was vaccinated twice but has not taken any boosters.

For the last 14 hours I’ve been a patient at St Vincent’s for high heart rate. They don’t know the cause but the doctor has prescribed a medication to treat it. I am being discharged this evening. 1/

Fr. Looney said that he felt pressured to get jabbed in February 2021 because hospitals and nursing homes told priests they could not visit if they were not “fully vaccinated.”

“Actually that very first shot … I get home and I realized that my heart rate was higher than it normally was,” Looney shared.

A normal bpm is between 60 to 100 bpm, according to the Mayo Clinic. He said doctors in December 2021 said there was nothing to be done to lower his heart rate. “There was no attempt to try to lower my heart rate,” Looney said. Subsequent medical professionals would tell him they had no idea why he had heart problems.

The heart problems have left him “tired” and need of regular maps. “Just walking at 3.5 miles per hour, my heart rate would get up to 150 beats per minute,” the priest said.

He said that a recent doctor told him that the problems that followed the jab would seem to point to a causal relationship. Fr. Looney shared that he knows another person who has developed heart problems after the jab.

“No 33-year-old should be resting in bed,” with an elevated heart rate problem, Fr. Looney’s doctor told him.

Fr. Looney’s problems with the COVID jabs are just the latest example of the harms of abortion-tainted shots. The jabs have an established history of causing cardiac problems, including heart inflammation (myocarditis) and blood clotting.

An analysis from the Florida Department of Health “found that there is an 84% increase in the relative incidence of cardiac-related death among males 18-39 years old within 28 days following mRNA vaccination.”

Furthermore, the problems of vaccines and heart problems in young men led a senior government official in charge of vaccine safety to warn against the use of them in that demographic.

Food and Drug Administration vaccine advisor Dr. Doran Fink said at a September 2021 vaccine safety committee meeting that men under 40 are at greater risk of hospitalization from COVID shots than the virus itself, particularly due to myocarditis and other heart problems.