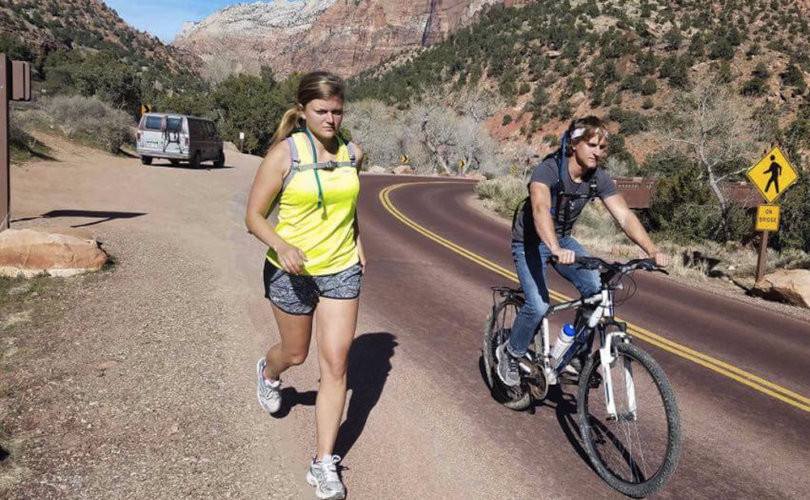 Anna Hoduski set out to run across the U.S. last July and she will wrap up her nationwide pro-life journey on Sunday at the Lincoln Memorial in Washington, D.C.

Speaking at churches and schools, youth groups, Bible studies and anywhere else she could, she shared the message that life has value.

Hoduski, assisted by a devoted team and supported by a board and her family, visited some 68 venues to talk about the importance of life since her journey began.

On a shoestring budget, not always knowing where the funds would come from or where and when she might be welcomed to speak next, Hoduski and her team trusted in God, who always provided.

Her close-knit team, consisting of her sister, a friend, and her brother when he has been available, went from Kansas City, Kansas, westward, then later from Kansas toward the eastern seaboard.

They camped or slept in an old conversion van that didn’t always run, cooked and ate on the road, and sometimes stayed in host homes. There were days without showers and times when doing laundry meant visiting the nearest body of water.

Hoduski spoke and raised awareness for life all along on the route, at times commuting from where they were camped to a venue.

Her brother trained her and accompanied her for part of the route, and her team documented the trip on video and still photography. Her coordinator initiated hundreds of contacts. One of her engagements was speaking in a sports gym.

They established a non-profit for the ministry and she has a webpage, Project If Life, and social media accounts.

Upon finishing, Hoduski will have run more than 1,700 miles, followed by biking the remaining roughly 1,200 after developing knee problems.

Hoduski went through 10 pairs of running shoes and three bikes with 20 flat tires.

Any struggle she may have had was more than worth it, she said, because of her commitment to life.

“This is important,” she told LifeSiteNews.

Hoduski’s goal has been to energize people in the pro-life movement and teach them how they can make a difference.

The unborn face by far the biggest threat to life, she says, but she thinks America is slowly beginning to wake up to what abortion is.

The journey has taught her that every step matters, and that the day-in-and-day-out tasks that seem so small are what’s going to make the difference in the fight for life.

Hoduski, a Kansas City native, completed her undergraduate degree in Math education in 2016, but she is convicted in the fact that God is calling her to work in pro-life ministry.

She told LifeSiteNews she first became involved in supporting the pro-life cause as a fifth-grader, but later as a young woman she wanted to become more deeply involved.

She felt the call to pro-life work on her heart and prayed while training for a half-marathon her sophomore year in college. It was then the God told her what she should do, Hoduski said.

She began planning the trip and doing deeper research into the life issue in 2014.

God has been in control from the beginning, she said. Every time they were close to running out of money, somehow more would come.

It was a little scary at first, Hoduski told LifeSiteNews, but she said her parents raised her to trust He would provide.

When their van broke down and took awhile to get repaired, some unexpected speaking engagements emerged during that time that would not have happened had they kept moving on the route.

As the group pondered how to manage the sizable repair bill for the van, the mechanic presented them with an invoice totaling zero. It turned out his daughter had had an unplanned pregnancy, and she had been helped by others to choose life in her situation, Hoduski said.

So the mechanic understood the importance of the work firsthand – a nice surprise.

“It was just amazing,” she said.

They have encountered some resistance and even hostility to the pro-life message, but Hoduski said, “You just try to be graceful and smile.”

The whole experience has served to strengthen her commitment to the cause and trust in God’s plan.

In one instance, someone criticized her for the project on social media, telling her she wasted her time giving a particular talk.

Hoduski later learned that a doctor in attendance had been seeking a volunteer opportunity, and after hearing Hoduski talk about possibilities for medical professionals to help, the doctor began helping at a pregnancy center, enabling it to become a medical clinic.

“Wherever He has me speak,” Hoduski said, “there’s a reason for it.”

She believes the number one thing people can do for life in America today is pray.

Hoduski is scheduled to speak about her pro-life adventure on Sunday evening, October 15, at the Lincoln Memorial at 7 p.m. When she concludes, the group will continue the event with a social gathering nearby.

She is eager to share her story and continue the ministry.

After the official conclusion, Hoduski plans to continue performing pro-life outreach and speaking engagements based out of Kansas City.

“So many people want to hear about the pro-life movement,” she said. “It’s just been so encouraging to me.”

For more information on Project If Life, visit the website “that tells the the story of her journey and offers pro-life resources,” or email [email protected]