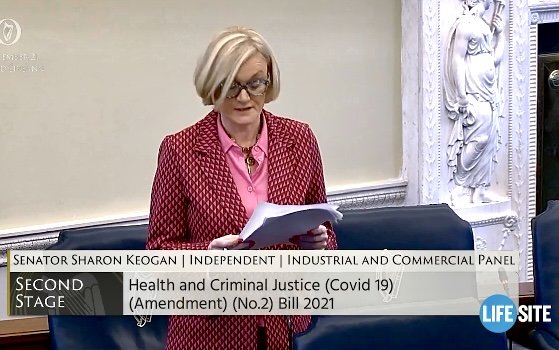 DUBLIN, Ireland (LifeSiteNews) — An Irish senator said the top eight Pfizer and Moderna shareholders saw their combined wealth rise by €9 billion euro, or $10 billion, in the week Omicron was discovered.

The Irish senator was referencing a report by the Daily Mail that found the top eight shareholders made more than $10 billion on the heels of the Omicron news, and that Moderna CEO Stephane Bancel saw his personal wealth rise by $824 million in the week after the discovery.

Bancel’s share value reportedly rose by $1.7 billion at one point in the week between November 24 and December 1, but a lost legal dispute concerning company patents brought his stocks back down to an $824 million valuation.

In a hard-hitting rebuke to the draconian policies of Irish Minister for Health Stephen Donnelly, Senator Sharon Keogan encouraged him to “check the stock market” and “join the dots” in assessing who benefits from the global response to COVID, and to cease making the participation of people in society “contingent upon the consumption of the product of a private company under direct or indirect threat of force.”

The senator also described proposed mandatory vaccinations in Germany and ongoing lockdowns for the unvaccinated in Austria as a “rite of passage” forcing people to be “reborn into the new normal.”

The December 9 speech by Keogan was made in response to the Irish government seeking an extension of its lockdown powers in the lives of Irish citizens, with the “Health and Criminal Justice” bill expected to be signed by the Irish president in the coming days.

Senator Keogan dismissed the use of sunset clauses, which imply an end to the lockdown legislation, as “not worth the paper they are written on,” given the many times the Irish government has extended their ability to enforce vaccine passports, hotel quarantines, mask mandates, 5-kilometer travel limits, and household or public gathering restrictions.

“You’d have to laugh, if it weren’t so serious, at the phrase ‘extraordinary time limited measures’ contained in this bill’s explanatory memorandum — as each act was passed, that ‘time limited’ nature was stressed so heavily,” Keogan said in opening.

“And yet each sunset clause extension was used in its entirety … after all your posturing on how extraordinary these measures are, and the time limits, you can literally just go back scribble out the end dates and pencil in any other date you want,” she added.

Keogan charged that the draconian powers were being extended until the end of June so politicians could reintroduce a full lockdown “at the drop of a hat when someone in Timbuktu discovers the Sigma variant” and also expressed her concern about the global response to COVID.

“Germany (and its mandatory vaccine proposal) cuts straight to the chase: your body belongs to state and under threat of force you will comply,” Keogan said.

“Austria insidiously preserves the illusion of freedom while locking them in their homes until they freely choose to undergo the rite of passage and be reborn into the new normal,” she continued. “It’s simple really: take the jab and get your freedoms back … ”

The prospect of requiring a fourth shot in countries like Israel was also condemned by the senator, as she highlighted how “that precious COVID cert (vaccine passport) upon which your freedoms hinge can be invalidated by the wave of a wand and you’ll have to obey it (the government) again to get it (the pass) back, and again, and again, and again … ”

The Pifzer CEO’s prediction that people will need an annual COVID vaccination for many years to come was sardonically compared by the senator to a Coca-Cola CEO recommending a can with every meal, “because I’m sure he’s just concerned for people’s safety.”

Keogan then laid out the remarkable discovery that “in the week of Omicron it was discovered the wealth of the eight top Pfizer and Moderna shareholders rose by a combined €9 billion.”

“Governments globally have collectively made ordinary participation in society contingent upon consumption of the product of a private company under direct or indirect threat of force,” Keogan lamented.

“Over the past two years, the livelihoods of ordinary people have been steadily siphoned into the pockets of pharma and tech giants — the only hope we have is in recognizing that this is an entirely unsustainable (situation), and will end,” she predicted.

“Here’s to sooner rather than later,” she added.

The senator finished by saying it was “absolutely disgusting” that people who are not vaccinated have had their freedoms curtailed, and pleaded in particular for those who cannot receive a vaccine to be given a pass similar to that employed in the United Kingdom.

LifeSiteNews yesterday reported how at least 75 federal legislators in the United States held stock in Moderna, Johnson & Johnson, or Pfizer in 2020.

The three companies are responsible for producing experimental COVID-19 injections.

The data raised serious ethical concerns about the objectivity of the U.S. legislature, prompting questions about how much government actors stand to profit from coercive jab mandates that have deprived Americans of their rights and handicapped a struggling economy.