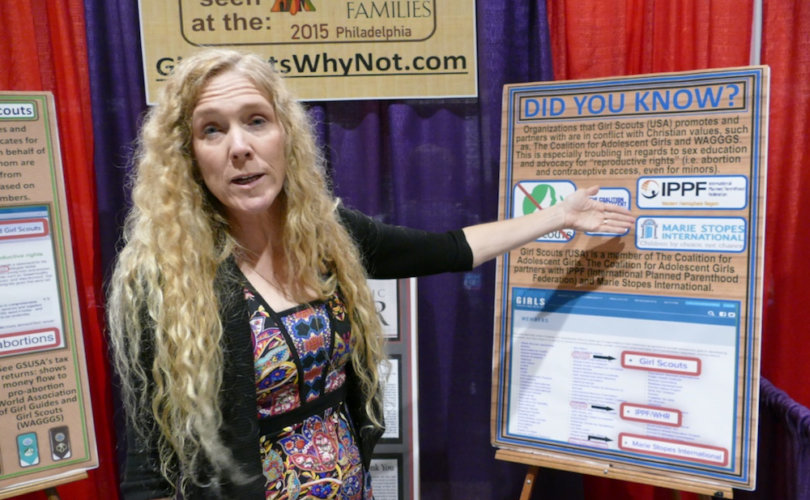 The Girl Scouts of Gateway Council in Jacksonville, Florida, includes Sanger on their list of “Women Working for Human Rights,” reports “Girl Scouts, Why Not?” founder Rochelle Focaracci.

“These councils have described Margaret Sanger as 'instrumental in the development of the human rights movement' and 'important for accomplishments of women,'” Focaracci said. Or one of the “most inspiring and empowering women in American history,” “a woman who has made a significant impact on society” and a woman who “opened the first birth control clinic.”

Sanger’s inclusion as a positive example for scouts in the Gateway Council is part of a “Take Action Project” for Brownie Girl Scouts, which are girls in second and third grade.

Who the Girl Scouts are promoting to young girls

Margaret Sanger is well known as the racist, eugenicist founder of Planned Parenthood, the nation’s largest abortion chain. There are numerous documented quotes about her ideology and contempt for certain segments of humanity, and her desire to see their populations controlled.

“We do not want word to go out that we want to exterminate the Negro population,” Sanger stated in 1939.

She also said of immigrants and the poor that they are “human weeds,” “reckless breeders,” “spawning … human beings who never should have been born.” Sanger said as well that birth control is for “weeding out the unfit.”

Focaracci’s group documents the Girl Scouts’ partnership with Planned Parenthood and other abortion groups, an issue that has been on the rise in recent years as the once venerable girls’ scouting group has moved more and more toward promoting radical issues to its young members.

The Scouts have both confirmed and denied that they work with Planned Parenthood, and they have also insisted they do not take a position on abortion.

The Girl Scouts of Gateway Council’s project information that offers Sanger as a role model states:

The fight for human rights for all people of the world continues. Women have taken leadership roles in human rights advocacy in all countries. Girls can learn about the struggle for human rights and needs, and study strong women who were and are instrumental in the development of the human rights movement. Girls can then support the effort by spreading the story to others.

Project sessions include topics such as Human Needs and Women and Human Rights. In session 4 — Roundtable Storytelling — the objective is to “share what was learned about women and human needs.”

The girls will take part in a sharing circle, where they will gather and then:

“Start by saying, ‘We're going to tell a story together. The name of the story is: Women and Human Needs.’ Start the story by saying, ‘Once upon a time there was a group of Girl Scout Brownies who learned about human needs.”

“Margaret Sanger, 1879-1966 (USA)” is then part of the accompanying list of Women Working for Human Rights and Needs Born Before 20th Century.

Focaracci told LifeSiteNews that conservative Christian Girl Scout troop leaders are put in an impossible situation with such programs. She warned that going along with it sends a message of approval for Sanger and her dreadful legacy.

“Troop leaders may think that they can keep their girls safe from this kind of information,” she stated.

But if they are appalled by the promotion of Sanger as a role model to young girls, they need to think about the implications of staying silent and continuing with the program.

“By continuing to support the Girl Scout program,” Focaracci added, “you may be implying to other troop leaders and Girl Scout families that you agree and consent with the local council’s list of promoting Margaret Sanger as a great woman that worked for human rights.”

Her research has shown there are several other Girl Scout councils that have also been promoting Sanger.

This past November, Girl Scouts of Southern Arizona shared a post from “A Mighty Girl’s” Facebook page, including information and a live link about a book for Girl Scouts “ages 12 and up.” The topic of the book, “The Feminist Revolution,” is “Three Most Inspiring and Empowering Women in American History,” listing Susan B. Anthony, Betty Friedan and Sanger.

“Most shocking is the Girl Scouts of Southern Arizona’s promotion of Margaret Sanger on their official council’s Facebook page,” Focaracci told LifeSiteNews. “With a post containing information and a live link for a book – “The Feminist Revolution” — targeting their members as young as 12.”

“This book has 21 different references to abortion,” Focaracci continued. “Page 162 states, ‘… As a result, less than 5 percent of their services include abortion. Planned Parenthood has … ,’ which is a deception that is repeatedly touted by Planned Parenthood and their stanch pro-abortion defenders.”

The Girl Scouts of Central Maryland published and posted its “Issue 4 Fall 2011” in the council’s “The Promise” newsletter, which included a letter addressed to the council’s members and their families from council’s CEO Traci A. Barnett. In her letter, Barnett wrote, “It is particularly interesting to look at the other important accomplishments of women.” … “In 1914, Margaret Sanger published the first issue of, The Woman Rebel.”

For girls in the Chesapeake, Virginia, Colonial Coast council to earn a “Women In History” patch in 2014 they needed to follow guidelines and complete listed activities. The council directed its girls to “read about a woman who has made a significant impact in her profession or on society” and then to “share what you learned.” This council suggested that girls could research to complete an activity and had Sanger on the list of suggested research subjects.

Focaracci also directed LifeSiteNews to a report from another group that works to educate on the Girl Scouts showing promotion of Sanger and birth control.

As of February 2013, at least six Girl Scout councils and Girl Scouts USA (GSUSA) were providing “The Eloquent Women: 13 famous human rights speeches by women” via social media to help girls gain proficiency in advocacy, according to the My Girl Scout Council group.

Aside from several speeches focused on sexuality, selections included Betty Friedan's final speech as president of the pro-abortion National Organization for Women (NOW), and Sanger's speech on women's rights to birth control.

Abortion is a human right?

“In every instance where these Girl Scout councils are promoting Margaret Sanger to their young girl members, the theme that seems to stand out is that Margaret Sanger was one of the first of great women to lead the fight for “women’s rights and human rights,” Focaracci pointed out. “I find this interesting when thinking about the new mantra of women’s rights organizations; the current popular motto is “Women’s Rights are Human Rights.”

Focaracci said her efforts to dialogue with varying Girl Scout councils about the disturbing information she has discovered have not been successful. She continues to stress that girls and their families need to know this information to be able to make an informed decision about involvement in the Girl Scouts.

Along with her group Girl Scouts, Why Not?, other groups advocating awareness of the Girl Scouts’ troubling ties include My Girl Scout Council, Speak Now Girl Scouts and #Cookiecott.