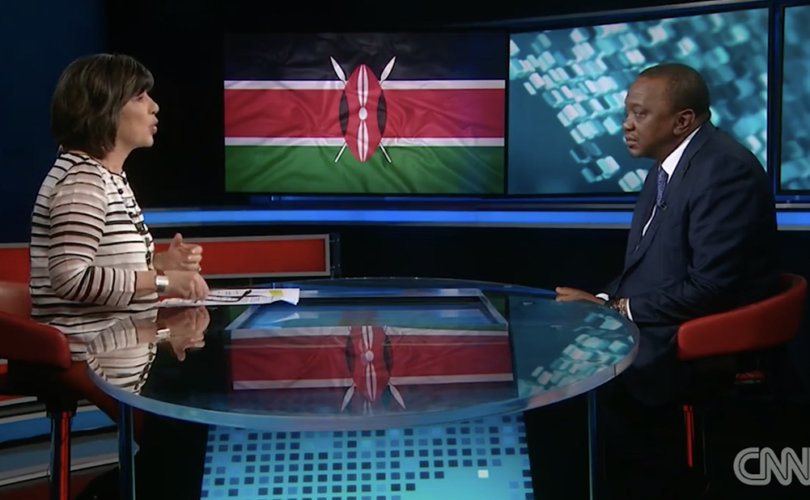 April 24, 2018 (LifeSiteNews.com) – An incredulous and outraged Christiane Amanpour warned Kenyan president Uhuru Kenyatta on Friday that “you’re going to get yourself into trouble,” following his strong repudiation of the LGBT political agenda in a CNN interview with the journalist.

After Kenyatta made it clear to Amanpour that Kenyan society rejects homosexual behavior and has no interest in establishing “rights” for the practice of sodomy, Amanpour took off her glasses, and, shaking her head, began to scold Kenyatta.

“You’re going to get yourself into trouble, because what you’ve categorically just stated is that this is not an issue for us, for the Kenyan people, and you don’t think that the idea of their privacy, their equality, their rights, is important!” Amanpour told Kenyatta. “This is a global issue right now.”

Amanpour told Kenyatta that Kenya’s law prohibiting sodomy is a “holdover” from “colonial Victorian” law, and claimed that homosexuals “just want to have equal rights the same privacy and equality as all other Kenyans do.” She then asked, “Is that something you aspire to for your country?”

“I want to be very clear, Christiane. I won’t engage in a subject that is not of any major importance to the people of the Republic of Kenya,” responded Kenyatta.

Although he acknowledged that the opinions of his people might change in the future, Kenyatta told Amanpour: “That is the position that we have always maintained, those are the laws that we have, and those are laws that are one hundred percent supported by ninety-nine percent of the Kenyan people, irregardless of where they come from.”

However, following Amanpour’s warning that he would “get into trouble” for his views. Kenyatta implied that he might have an opinion of the matter that differs from the majority in his country.

Current law in Kenya prohibits homosexual behavior as “carnal knowledge against the order of nature” as a felony that can be penalized with up to fourteen years in prison. Kenyans, like most other Africans, overwhelmingly reject homosexuality, with 90% calling it “unacceptable” in a 2013 Pew Research poll. This rate is actually lower than other African countries. In Nigeria, the “unacceptable” response was given by 98% of respondents, while 96% gave the same response in Uganda, Senegal, and Ghana.

U.S. president Barack Obama sought to pressure Kenya to change its laws regarding homosexuality during a state visit to the country in July of 2015, and he received a similarly forceful response from Kenyatta.

“We share so many values — our common love for democracy, entrepreneurship, value for families,” Kenyatta told Obama. “These are things that we share.  But there are some things that we must admit we don’t share — our culture, our societies don’t accept. It is very difficult for us to be able to impose on people that which they themselves do not accept.”

“This is why I repeatedly say that, for Kenyans today, the issue of gay rights is really a non-issue,” added Kenyatta.

A Nairobi court is considering a challenge to the country’s anti-sodomy law, and is scheduled to announce the date for the publication of its decision later this week.

Kenyan leaders to Obama: Don’t lecture us on gay ‘marriage’

‘Bama don’t preach: Kenyan bishop tells Obama not to promote gay ‘marriage’ on his next visit