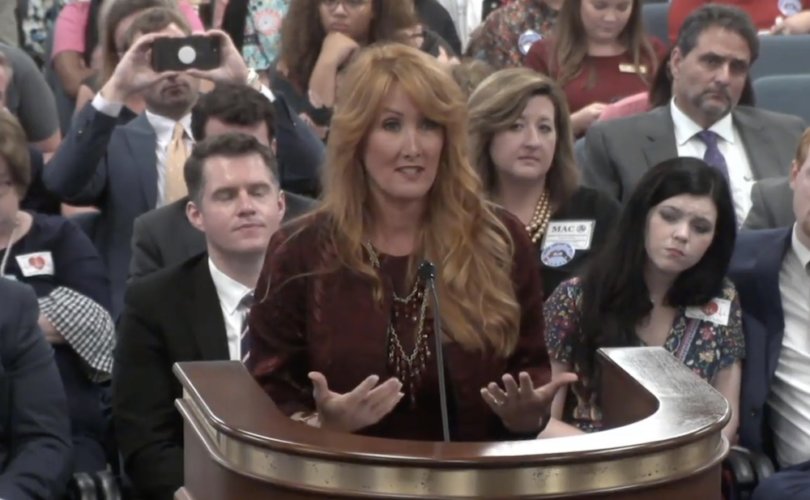 COLUMBIA, September 17, 2019 (LifeSiteNews) – A woman conceived in rape told South Carolina lawmakers in a powerful speech that allowing abortion in the case of rape as part of their proposed “heartbeat” bill “tells people like me that you don’t deserve to be living, that you’re subhuman somehow.”

South Carolina lawmakers are currently debating whether to ban abortion once a fetal heartbeat can be detected, but before that happens pro-life activist Rebecca Kiessling is calling on them to revise their legislation to include children conceived in rape under its protection.

Introduced in January, H. 3020 requires anyone committing an abortion to first perform an ultrasound to test for a fetal heartbeat and offer to show the ultrasound images to the pregnant woman. If a heartbeat is found, aborting the baby anyway would subject the abortionist to a fine of up to $10,000 and/or up to two years in jail, except in cases of rape, incest, or physical medical threat to the mother.

The bill has cleared the state House and is now up for consideration before the Senate, where Kiessling, founder and president of the pro-life group Save the 1, testified last week against the rape exception lawmakers added in April.

“My story is that I was conceived when my birth mother was abducted at knifepoint by a serial rapist,” Kiessling, who was conceived in rape prior to Roe v. Wade, told the senators. “She went to two illegal, back-alley abortions and I was almost aborted. Her choice was to abort me. I heard a senator speaking about how it’s all about choice and telling different people that he’s so glad that they’re here and glad they’re alive, well, are you glad I’m alive? Because I’m alive because I was protected. My mother did not choose life for me.”

She noted that the 14th Amendment to the U.S. Constitution says states cannot “deprive any person of life, liberty, or property, without due process of law; nor deny to any person within its jurisdiction the equal protection of the laws,” yet the heartbeat bill’s rape exception has “no semblance of due process” and is “denying equal protection to my people group” – a compromise, she added, that no-exception heartbeat laws in Alabama, Kentucky, Missouri, and Ohio have shown to be politically unnecessary.

“When you put exceptions in bills, you’re targeting us. My heart beats, just like everybody else’s. And, it is absolutely dehumanizing and demoralizing to target our people like that,” she said.

Kiessling noted that people conceived in rape are often given labels such as “horrible reminder,” “rapist’s child,” and “evil seed,” and recalled how thousands of pro-abortion activists recently descended on her Facebook page with messages such as “if you had any concern for your mother at all you would’ve killed yourself a long time ago.”

She pointed out that the U.S. Supreme Court has ruled that rape, even child rape, is not punishable by the death penalty, and abortion advocates don’t call for rape victims to be able to have their rapists’ killed, yet it’s perfectly legal to pay someone to impose the death penalty on an innocent child.

“I wasn’t lucky; I was protected,” Kiessling declared. “Legality matters.”

South Carolina Republican Gov. Henry McMaster says he will sign the heartbeat ban “immediately” if it passes, though whether it reaches his desk – and whether the final version will contain a rape exception – remain to be seen. Senate Democrats have threatened to filibuster the bill, something Democrats already had the numbers to do and a threat that has gained force since the 2018 midterm elections, when the GOP lost several reliable pro-life votes.