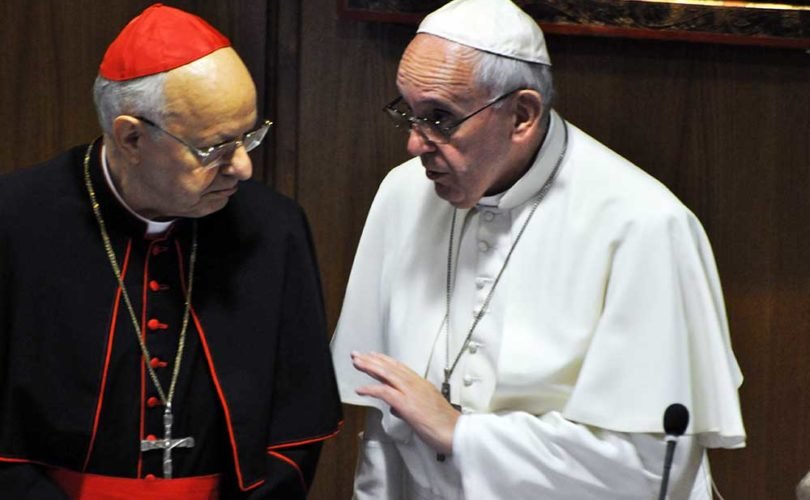 At a press conference at the Vatican today, Cardinal Lorenzo Baldiserri, the prelate in charge of organizing the gathering, said, without mentioning Chaput by name, that he did “not understand” why Chaput released the letter.

Chaput was present when the working document was published, Baldiserri said. “If he had some objections, he could have demonstrated them; we would have inserted them, calmly.”

“I do not understand because then, afterwards, he makes a declaration,” said the Cardinal, who stated that he made his comments “for honesty.”

Baldiserri was referring to the anonymous critique of the Synod’s Instrumentum Laboris Chaput published on First Things on September 21. The critique, authored by someone Chaput considers a “respected” North American theologian, claims the Instrumentum has “serious theological concerns.”

Chaput, one of 15 members of the Synod's ordinary council, said he published the letter because he was receiving “scores of emails and letters” from lay Catholics and clergy concerned about the synod and believed the letter was “substantive enough to warrant much wider consideration and discussion.”

LifeSiteNews reached out to Chaput’s office for comment, only to learn that the Archbishop was en route to Rome. A senior adviser said he was “unlikely to have a comment” on the cardinal’s remarks.

Chaput was also criticized by liberal Cardinal Blase Cupich of Chicago just days ago in a letter appearing on First Things.

Cupich alleges the critique represents a “woeful lack of understanding of magisterial teaching.” He also wondered why Chaput would publish an anonymous document.

Cupich was personally invited to the synod by Pope Francis.

Stephen White, a Catholic author who works for the Washington D.C.-based Ethics and Public Policy Center, wondered if there was something more to the timing of the atypical public nature of the criticism.

“Maybe the coordinated attempt to humiliate the last 13 prelates who privately and “confidentially” voiced concerns about a synod had something to do with it. (I’m sure +Baldisseri knows nothing about that.),” he tweeted.

Maybe the coordinated attempt to humiliate the last 13 prelates who privately and “confidentially” voiced concerns about a synod had something to do with it. (I’m sure +Baldisseri knows nothing about that.) https://t.co/1MnIDWKwIS

Today, Archbishop Chaput released yet another anonymous letter he received from a lay Catholic who says he has “concerns about the synod’s timing and possible content.” Chaput published it as his weekly column for the Archdiocese of Philadelphia.

Written by a young Syro-Malabar Catholic living in India, the letter admits that the anonymous critique published by Chaput on First Things “does a good job” of addressing the content of the Instrumentum. However, it neglects to speak about the superficial “fluff” also found in the document.

“If the Church wants young people to listen to her, she should first convince us that she has a message, that she is qualified to preach it, and that she does so with conviction and compassion.”

The letter also argues that sections of the Instrumentum do “not actually state” what Cardinal Cupich claims it does. The real “issue at hand” is whether or not young Catholics can “trust in the good intentions of the Synod Fathers.” Unfortunately, the author continues, “the hierarchy simply does not have the trust of a significant portion of the laity. This trust must be regained, and it certainly won’t be regained by speaking as though they have something to hide.”

Chaput also released an op-ed that appeared in Il Foglio, an Italian newspaper, on Saturday, September 29 reiterating his concerns with the Synod.

The Instrumentum is “strong in the social sciences, but much less so in its call to belief, conversion, and mission,” he wrote. “Neither the Pope nor the Church is served – particularly in a time of humiliation and crisis – by an overdose of sentiment, accommodation, and sociology.”

“Faith demands more than that.”

Chaput also stated that the Church is “in turmoil” and that it seemed there couldn’t be a “more ironic” time to host a gathering focused on young people, faith, and vocational discernment.

“The synod’s success depends on a profound confidence in the Word of God and the mission of the Church, despite the sins of her leaders.”

Not alone in raising the alarm

Archbishop Chaput is not only Catholic prelate expressing concern with the Synod and its working document.

At the 2018 Rome Life Forum, Cardinal Raymond Burke warned that there is a risk the synod will be “manipulated” in such a way that will ultimately bring “more difficulties” for the Church.

Fr. Gerald Murray, a frequent guest on EWTN’s The World Over, has said it is a “big problem” that the synod’s working document includes the term “LGBT” youth. Cardinal Baldiserri confirmed today the term “LGBT” youth will remain in the Instrumentum despite it never being asked for by the young people who attended the pre-synod gathering in March.

On September 8th, Bishop Joseph Strickland of Tyler, Texas called for the synod to be cancelled in light of the ongoing sex abuse scandals involving minors and seminarians.

Many lay Catholics have also voiced caution over the Synod.

Joseph Sciambra, a public speaker who urges same-sex attracted Catholics to live chaste lives, believes radical pro-LGBT forces are planning a coup at the synod in an attempt to alter Church teaching.

Matthew McCusker from Voice of the Family said the synod’s preparatory document released earlier this year “makes little attempt to present itself as being rooted in the Tradition of the Church.”

Who will be attending?

The Synod, officially titled “Young People, the Faith, and Vocational Discernment,” will convene on Wednesday, October 3rd and run until October 28th. More than 30 young people will attend as auditors.

50 Cardinals and more than 170 bishops, archbishops and auxiliary bishops will also participate. Ten priest and brothers from religious orders are expected to be present too. Three women religious will serve as auditors. Pope Francis hand-picked another 41 participants.

Among the most controversial clergy to attend is Bishop Felix Genn, a German bishop who last month did not stop a priest under his care from circulating homosexual “love” stories in his diocese. Genn has been accused of covering up several sex abuse cases.

Pro-gay Cardinal Joseph Tobin, hand selected by Pope Francis to attend, was scheduled to appear as well but withdrew due to a mounting sex abuse crisis in his archdiocese.

Dutch Bishop Robert Mutsaerts declined to attend despite having been designated by the Dutch Bishops’ Conference. In an interview with LifeSite, Mutsaerts said that “given all the recent difficulties and lack of openness” regarding the sex abuse scandal and Archbishop Vigano’s testimony, the youth synod “will lack credibility.”