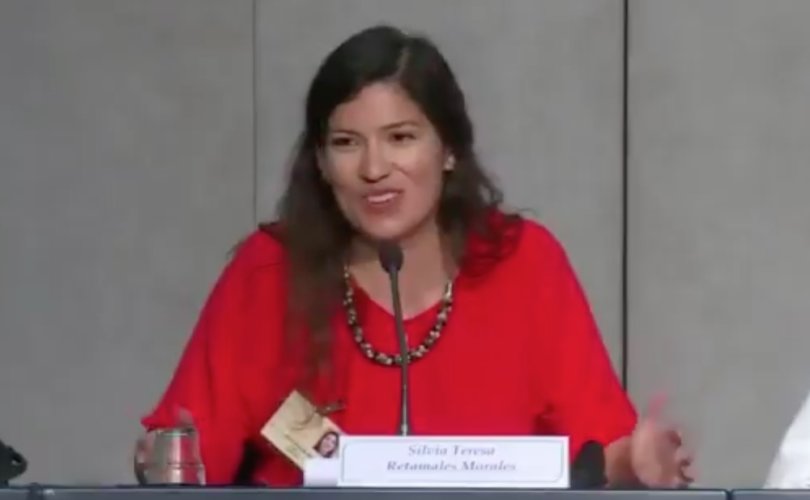 ROME, October 15, 2018 (LifeSiteNews) – A lay delegate to the Vatican Youth Synod lectured the Catholic Church to cease “discrimination” against homosexuals Monday, relaying “powerful” sentiments she claims to have received from “non-Christian youths.”

Silvia Teresa Retamales Morales, a lay delegate to the synod hailing from Chile, was among the speakers at Monday’s daily briefing at the Vatican press office. Her remarks relayed sentiments she claimed she was repeating from “non-Catholic” and “non-Christian” youths who reached out to her, whom she claimed outnumbered the young Catholics reaching out.

“They wanted the church to be more open […] a multicultural church that’s open to all, that should not be judgmental, a community that makes everybody feel at home, reflecting the message of Jesus Christ,” Morales said, according to a Vatican translator. “The church should not discriminate against minorities or people with different sexual orientations or who are poorer, no.” They also wanted a church more “welcoming” to “fragile” people, as well as a more representative role for women.

In another passage speaking for herself, Morales defined homosexuals as people who “have the same rights we have,” who “live their faith within the church,” and who should “feel as children of God, not as problems.” She chided the church for “discrimination” in the form of people who “don’t open arms wide to welcome and accept homosexuals,” though her translated comments do not elaborate on literal examples of this “discrimination.”

At #Synod2018 Presser; Chilean Youth Silvia Teresa Retamales Morales says many non-Catholics asked for a “more open Church” being a “multicultural Church open to all, not judgmental, not discriminate against minorities, or people with different sexual orientations, or the poor” pic.twitter.com/l6lnc8L5uz

At #Synod2018 Presser; Chilean Youth delegate, Silvia Teresa Retamales Morales says “Homosexuals are people with the same rights we have, they too live their faith within the Church, they should feel as children of God and not as problems.” “The Church has to be more inclusive” pic.twitter.com/a6bcIwJtAf

Neither the clips nor Vatican News’ report on the briefing make any mention of balancing compassion for those who struggle with same-sex-attraction with recognition of the sinfulness of homosexual acts. The Catechism of the Catholic Church already teaches that homosexuals deserve “respect, compassion, and sensitivity,” while at the same time recognizing same-sex inclination as an “objective disorder” and unequivocally disapproving of all homosexual acts.

Awi Mello, a member of the Schoenstatt Fathers and part of the commission that will be summarizing the synod, told Crux that listening to the young people has been “extremely positive,” and that “we feel responsible for implementing everything that comes out of the synod.” He also said, however, the “synod is not the place to face the content of all” controversial issues.

Others have been less impressed.

“So let me try to understand: The Synod is listening to the (uniformed) opinions of ‘non-Christian youth’ so that Catholic leaders can consider adjusting teaching and practice?” EWTN’s Raymond Arroyo asked in response. “What other communion attempts such a thing? Do Muslims invite bishops in to help rewrite their teaching?”

So let me try to understand: The Synod is listening to the (uniformed) opinions of “non-Christian youth” so that Catholic leaders can consider adjusting teaching and practice? What other communion attempts such a thing? Do Muslims invite bishops in to help rewrite their teaching? https://t.co/h2r6THa8aR

Morales’ comments and the lack of official pushback have only heightened Catholics’ fears that the youth synod has been hijacked by pro-homosexual radicals within the church, and that youth delegates are being manipulated to support a predetermined message.

LifeSiteNews reported last week that Equal Future – an alliance of pro-LGBT activist groups like Human Rights Campaign, GLAAD, and the Global Network of Rainbow Catholics, along with dissident Catholic groups like New Ways Ministries and Dignity – have been lobbying the synod as part of a “once-in-a-generation moment” to change the church’s direction. Last week, the Vatican also revealed the twelve people who will draft the synod’s final document, a group of papal appointees and synod organizers that have alarmed conservative critics.

Dr. Paolo Ruffini, the Prefect of the Vatican Dicastery for Communications, also said Monday that synod fathers will vote paragraph by paragraph on the final version of the document, Vatican News adds, with each paragraph requiring two-thirds support to pass.