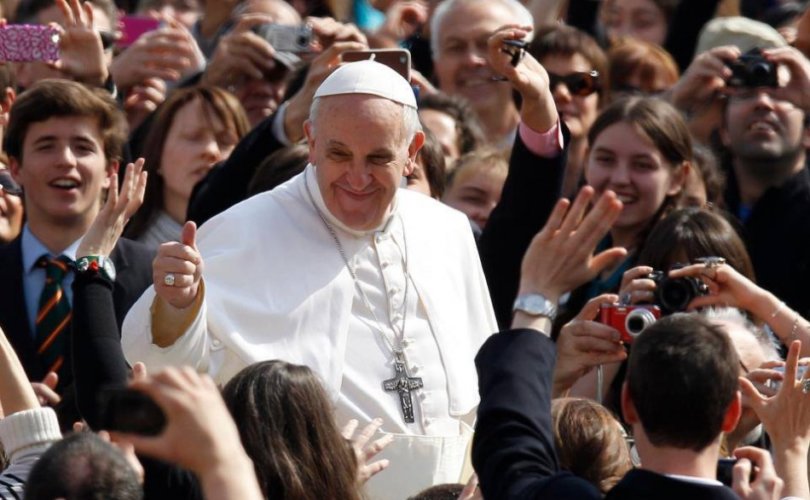 In an apparent repeat of the 2015 Synod on the Family, Catholic principles on sexuality, and the Church’s governance and apostolic nature may be in for another ambiguous reinterpretation ushered in by dubious processes during the Youth Synod.

The “Synod on Young People, the Faith and Vocational Discernment” ended Saturday, with the entire final document getting the required two-thirds majority for passage.

Sections of the document on sexuality, synodality and the role of women in the Church, and the document’s deference to the working document (Instrumentum laboris) met with notable pushback in the vote from some Synod fathers but passed anyway.

Further adding to concerns over the final document is Pope Francis’ release of a document known called an Apostolic Constitution just before the Youth Synod that aims to augment the magisterial force of the final document generated by a Synod.

The 2015 Synod on the Family and its 2014 predecessor turned into a battle over Communion for Catholics living in objectively sinful situations.

Called with a theme of addressing issues faced by the family today, the Synod on the Family was widely considered to be conducted with a predetermined outcome — the tacit approval of Holy Communion for divorced and civilly remarried Catholics and others living in otherwise non-marital unions.

Irregularities surrounding the Synod processes, ostensible manipulation behind the scenes, and the use of ambiguous language in Synod documents signaled an assailing of the Church’s perennial teaching on marriage. Amoris Laetitia, the pope’s exhortation resulting from the Synod on the Family, has drawn disparate interpretations by episcopal conferences worldwide, bringing about the feared end with regard to Communion.

In the Youth Synod final document, there is indistinct language that could open the door for normalization of homosexuality in the Church, and it also contains wording suggesting it should be read in light of the Instrumentum laboris, or working document, which contained the term LGBT, the first time for a Vatican document to have the loaded political term.

The concept of Synodality — typically understood to mean a decentralization and democratization of the Church and the magisterium away from the papacy and the Vatican to local churches – was included in the final document, when it hadn’t been widely discussed during the Synod. This has been a talking point of Pope Francis in his pontificate but was a surprise in the final document, suggesting it was likely slipped in by among synod officials appointed by the pope.

Further, language in the final document calling for the “presence of women in ecclesial bodies at all levels” — and that their participation be included in “ecclesial decision-making processes” — raised a red flag related to tampering with the apostolic nature of the Church, rejecting Christ’s intent for episcopal leadership, and weakening the spiritual fatherhood of priests.

That’s not our understanding of the magisterium

Msgr. Charles Pope of the Archdiocese of Washington, D.C., thought it would be problematic to apply magisterial authority to the Youth Synod document.

The idea of listening is just fine, he told LifeSiteNews, but giving the document that sort of authority would go too far.

“That’s not our understanding of the magisterium, at least historically,” he said.

Regarding the insertion of Synodality to the final document, it really isn’t a synod if it’s called for one thing but then becomes about another, he added, with people behind the scenes pulling levers, as has happened in all of the three last synods.

Why go through this process then? Msgr. Pope asked.

While the term LGBT did not make it into the final document, the term “sexual inclination” did, along with vague language on ministering to homosexual individuals that could be read as a green light for affirming homosexual behavior.

This effort to insert ambiguous language that would destabilize Church teaching recalls the Synod on the Family, which pushed “accompaniment” of couples in “irregular unions,” the primacy of “conscience” with regard to individuals in adulterous or other sinful unions discerning that they could receive Communion, and also a “healthy decentralization” of power, referencing a push to redirect power away from the papacy and toward episcopal conferences.

The paragraph on sexuality in the Youth Synod final document says among other things that “there are questions concerning the body, affectivity and sexuality which require a deepened anthropological, theological and pastoral elaboration.” It references “paths of accompaniment in the faith of homosexual persons” and speaks of these paths helping these persons “to recognize the desire to belong to and contribute to the life of the community; and to discern the best ways of achieving it.”

It also says these “paths of accompaniment” are to help homosexual individuals “integrate the sexual dimension more and more into their personality, growing in the quality of relationships and walking towards the gift of self.”

Regarding ambiguity pertaining to sexuality in the final document, Msgr. Pope said he would have preferred a more rigorous articulation of Church teaching, and that God’s teaching involves more than people’s feelings.

While the language may not itself outright defy Church teaching, he said, it certainly doesn’t offer it to Catholics either.

“There’s a lot of stuff in the showroom, but there isn’t much in the stockroom,” said Msgr. Pope.

“I think we have to get people reacquainted with what God teaches,” he continued, “who we are and how He made us.”

“The Church is not going to change what God has taught about human sexuality,” added Msgr. Pope. “Let’s go back to the source.”

The Church already has a clear, rich, and articulate Christian anthropology

Philadelphia Archbishop Charles Chaput told the National Catholic Register that this expressed need for “deepening” or “developing” our understanding of anthropological issues is one of the most “subtle and concerning” problems in the text.

“Obviously, we can, and should, always bring more prayer and reflection to complicated human issues,” Chaput said, but stated further that the Church “already has a clear, rich, and articulate Christian anthropology. It’s unhelpful to create doubt or ambiguity around issues of human identity, purpose, and sexuality, unless one is setting the stage to change what the Church believes and teaches about all three, starting with sexuality.”

Chaput repeated these thoughts in his column and to the Wall Street Journal.

The archbishop said the final document, “while not without its own flaws, is an improvement over the original instrumentum laboris text.” He did not comment on the final document’s call to be read in complementarity with the working document.

There is no such thing as an ‘LGBTQ Catholic’

Archbishop Chaput, who had raised concern over the working document in advance of the Synod, had also told Francis and the other Synod Fathers in his intervention that the term LGBT should not be used in the Youth Synod document.

“There is no such thing as an ‘LGBTQ Catholic’ or a ‘transgender Catholic’ or a ‘heterosexual Catholic,’ as if our sexual appetites defined who we are,” he said, “as if these designations described discrete communities of differing but equal integrity within the real ecclesial community, the body of Jesus Christ.”

“This has never been true in the life of the Church, and is not true now,” Chaput stated. “It follows that ‘LGBTQ’ and similar language should not be used in Church documents, because using it suggests that these are real, autonomous groups, and the Church simply doesn’t categorize people that way.”

There’s very little sense of heartfelt apology; clericalism is by no means the central issue

Chaput, who had called upon the pope to cancel the Synod on Youth in light of the Church’s surging sexual abuse crisis, criticized the final document’s treatment of the abuse scandal, terming it “frankly inadequate and disappointing on the abuse matter.”

“Church leaders outside the United States and a few other countries dealing with the problem clearly don’t understand its scope and gravity,” he said. “There’s very little sense of heartfelt apology in the text. And clericalism, for example, is part of the abuse problem, but it’s by no means the central issue for many lay people, especially parents.”

Jesuit Father James Martin, Vatican communications sonsultor and fervent proponent of LGBT affirmation, praised the Synod’s final document’s use of the term “accompaniment,” and said it “acknowledged that the church doesn't know everything about LGBT people and (as with other groups) must listen to them.” Martin also lauded the document’s acknowledgement the many in the Church already work to minister to persons identifying as LGBT, and said it “spoke clearly of the need to reach out, include and look for ways for LGBT people to be part of the life and mission of the church.”

How is this magisterium?

Canadian priest, professor and commentator Father Raymond de Souza noted how Francis released the new regulations right before the Synod, allowing him to designate the final document as magisterial, and said that, as this is a novelty, it remains to be seen what a magisterial declaration for the Youth Synod document would bring.

He pointed out how the final document referenced the Instrumentum laboris, prepared months before the Synod and how it said it should be read in “complementarity” with the final document, questioning how the two documents could add up to be magisterium.

“That adds a further question about status,” Father de Souza said. “The ‘working document’ was not prepared by the synod, nor was it voted upon by them. How then could it have any status at all, let alone that of being ‘complementary’ to a potentially magisterial document?”

Father de Souza wrote in the National Catholic Register about another significant issue with the Youth Synod – that of translation obstacles. The text of the document was read in Italian in the Synod hall, but only available in Italian via hard copy, and there wasn’t sufficient time for Synod Fathers to process it.

This mirrored the 2015 Synod on the Family that resulted in Amoris Laetitia, where non-Italian-speaking bishops and cardinals had to vote on the final document presented in Italian without the option of going outside the Synod hall for translation assistance.

Chaput had written in his column as well about the ambiguity of rules and process at the Youth Synod, and also the lack of needed translations.

There was friction because of the translation problems at the Youth Synod, de Souza wrote, and it was unclear why the Synod secretariat could not takes steps to see that translations were provided.

“In his concluding address, Pope Francis said that the document now needs to be prayed over, studied and reflected upon, before proper decisions can be made,” Father de Souza said. “Prayer, study and reflection would have also been suitable before it was approved.”