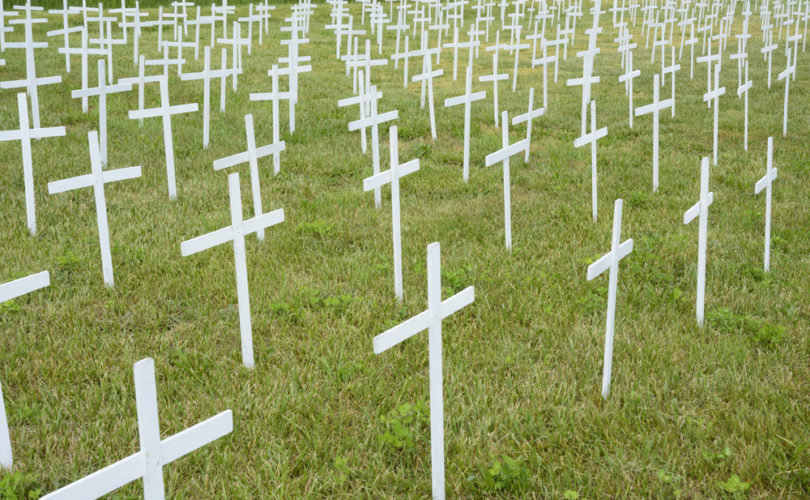 CHATHAM, Ontario, December 9, 2015 (LifeSiteNews) – A vandal who struck in the night to break or uproot 1,000 white crosses from a field near Chatham, Ontario has not discouraged the Christian youths who made them.

“Those are things most Canadians aren't aware of and that was their aim, and it's still their aim,” Diane Bergsma, a school teacher who coordinates youth activities at the Eben-Ezer Canadian Reformed Church, told the Chatham Daily News.

Acting out Christ's love in the world is a taken seriously in the Reformed tradition, Eben-Ezer Pastor David deBoer told LifeSite News. Across Canada, members of the various Reformed fellowships have founded a Christian labor union, a Christian farmers association, systems of schools in many provinces, and a social justice organization. Pastor deBoer said their pro-life activism is motivated “by the sheer scale of abortion in Canada, more than 100,000 a year.”

But Pastor deBoer added that there was another issue involved for Reformers. “We believe our free speech has to be exercised. We cannot let ourselves be intimidated. We are not trying to impose our morality. We want to live our faith and show our love for others.

“We also want to show our concern and support for the mothers and fathers of babies threatened by abortion, not just to rescue the babies.”

According to Bergsma, “They (the students) said, 'It's not about us, it's about the message and we're sorry that people feel compelled to react this way. This isn't about judgment.”

Mary Ellen Douglas of the Campaign Life Coalition told LifeSiteNews that the vandalism may well backfire. “It's so often the case that this kind of thing gives us more publicity than we would have gotten otherwise. And I take it as a good sign that we've angered somebody. Anger is better than apathy.”

The students had erected the crosses to memorialize the more than 100,000 Canadian babies killed in their mothers' wombs annually, and to expose Canada's lack of an abortion law.

The youth group has wasted no time planning how to get the crosses back in the bare field, made available by a supportive farmer. On Saturday they will hold a work bee to repair the broken signs for replanting. They are asking supporters to make donations of money to Outreach for Hunger, or of baby needs to Refuge House in Chatham.