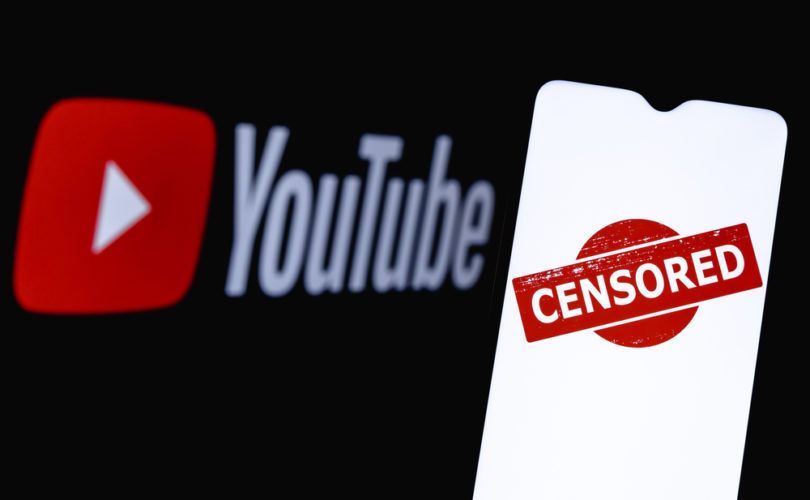 (LifeSiteNews) – Google-owned video giant YouTube plans to begin censoring whatever it deems “misinformation” pertaining to the safety of abortion, which pro-lifers suspect will have the effect of suppressing truth rather than clarifying it.

The company announced July 21 that in the coming weeks it will begin to “remove content that provides instructions for unsafe abortion methods or promotes false claims about abortion safety under our medical misinformation policies,” as determined by “published guidance from health authorities”:

1/ Starting today and ramping up over the next few weeks, we will remove content that provides instructions for unsafe abortion methods or promotes false claims about abortion safety under our medical misinformation policies. https://t.co/P7A27WPYuD

3/ We’re also launching an information panel that provides viewers with context and information from local and global health authorities under abortion-related videos and above relevant search results. pic.twitter.com/dGzEn4bIb8

While the latter could undermine abortion activists’ plans to promote self-induced home abortions as a means of circumventing new pro-life state laws, the former is all but certain to be used against pro-life efforts to educate the public about the risks of “safe” abortions by taking the politically- or ideologically-motivated determinations of Democrat health officials as medically authoritative.

In fact, even when surgical abortions are committed by fully-licensed physicians, they are frequently anything but safe for the mother, as evidenced by the records of numerous abortion facilities across the country, including abortion chains embraced by abortion allies as leaders for their cause.

As for chemical abortions, under the Trump administration the U.S. Food & Drug Administration (FDA) had warned mail distributors of abortion pills that their flouting of the Risk Evaluation and Mitigation Strategy (REMS) program requirements, which ensure that providers can “assess the duration of the pregnancy accurately, diagnose ectopic pregnancies, and provide surgical intervention in cases of incomplete abortion or severe bleeding, or to have made arrangements for others to provide such care” — and give women “access to medical facilities for emergency care” — could expose themselves to regulatory action potentially “including seizure or injunction, without further notice.”

That policy was reversed by the Biden administration, however, and many Democrats favor allowing doctors to dispense abortion pills to patients to take them without in-person medical supervision.

An open letter in 2020 from a coalition of pro-life groups to former FDA Commissioner Stephen Hahn noted that the FDA’s own adverse reporting system says the “abortion pill has resulted in over 4,000 reported adverse events since 2000, including 24 maternal deaths. Adverse events are notoriously underreported to the FDA, and as of 2016, the FDA only requires abortion pill manufacturers to report maternal deaths.”

Despite prevailing media narratives to the contrary, abortion is also associated with significant mental and emotional problems for women, including increased suicide attempts, long-term clinical depression, psychiatric illness requiring hospitalization, and substance abuse. Additionally, groups such as Silent No More and Rachel’s Vineyard compile scores of firsthand accounts of women describing the trauma and heartbreak they endured after their abortions.

New York Democrat Gov. Kathy Hochul, who has vowed to make her state an abortion “safe harbor,” praised YouTube’s decision as an “important first step.” Democrats in Congress have also called on Google to censor crisis pregnancy centers, which offer women free assistance with pregnancy care as well as adoption and parenting options.