Kudos for flagging offensive content, but there are many, many more just as bad or worse that haven't been taken down.

June 29, 2017 (LifeSiteNews) — Two days ago, LifeSiteNews posted a story about a shocking video showing a little girl waving a rainbow flag in front of a nearly nude male dancer during a “gay pride” celebration.

The video was too offensive, so the “dancer” was blurred out. But it was important in order to draw attention to the super-sexualization of children through exposure to “Gay Pride” events, which often display full or partial nudity and provocative simulated sex or dance.

In a move that was as stunning as the story, YouTube quickly removed the video and issued a warning to LifeSiteNews, saying “YouTube isn’t the place for nudity or sexually provocative content. Sexual content involving minors is particularly sensitive. YouTube prohibits uploading, commenting, or engaging in any type of activity that sexualizes minors.”

The warning went further, saying “Your video, ‘Girl watches man’s vulgar dance at Gay Pride Parade’ was flagged for review ... we’ve determined that it violates our guideline. We’ve removed it from YouTube and assigned a Community Guidelines strike, or temporary penalty, to your account.”

YouTube’s removal of the video is stunning precisely because the media giant is expressing agreement with LifeSiteNews and its many readers, who see much of the behavior at “Gay Pride” events as harmful for kids.

Having said that, YouTube is proving itself to be selective in its moral outrage. While they were quick to remove the LifeSiteNews video whose very purpose was to indict lewd behavior in front of children, scores — perhaps hundreds or thousands — remain on the YouTube site which glorify events at ‘gay pride’ celebrations which are as or more vulgar than what LifeSiteNews shared with its readers.

Spend just 15 minutes scouring YouTube’s archive for “Gay Pride” videos and you will quickly come upon sights displaying even greater levels of sexual vulgarity and nudity.  Remember, parents are encouraged to and do bring their young children to these “celebrations.” These things are almost always too vulgar for us to show uncensored on LifeSiteNews.

But take a look at these photos from the New York City PrideMany Parade: 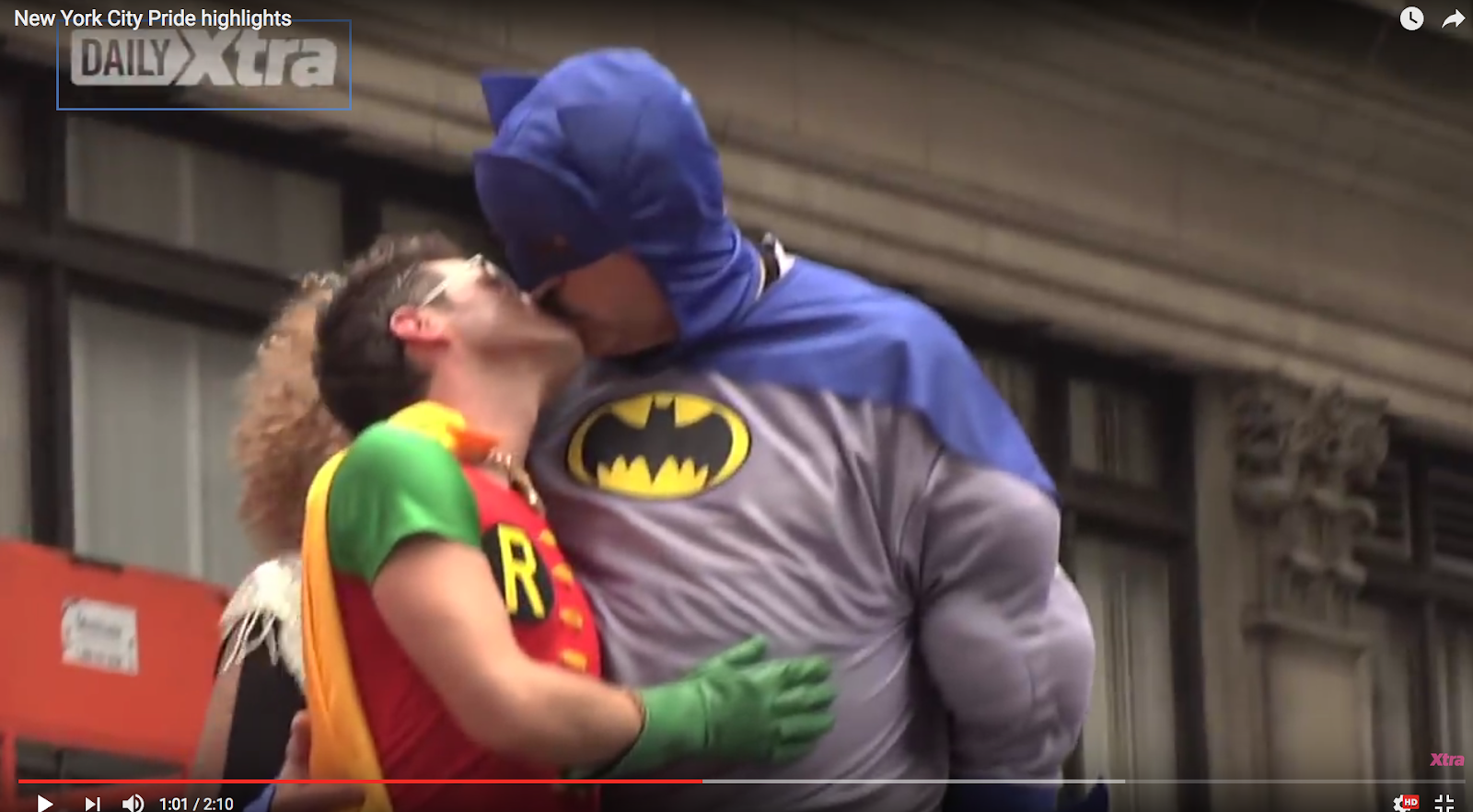 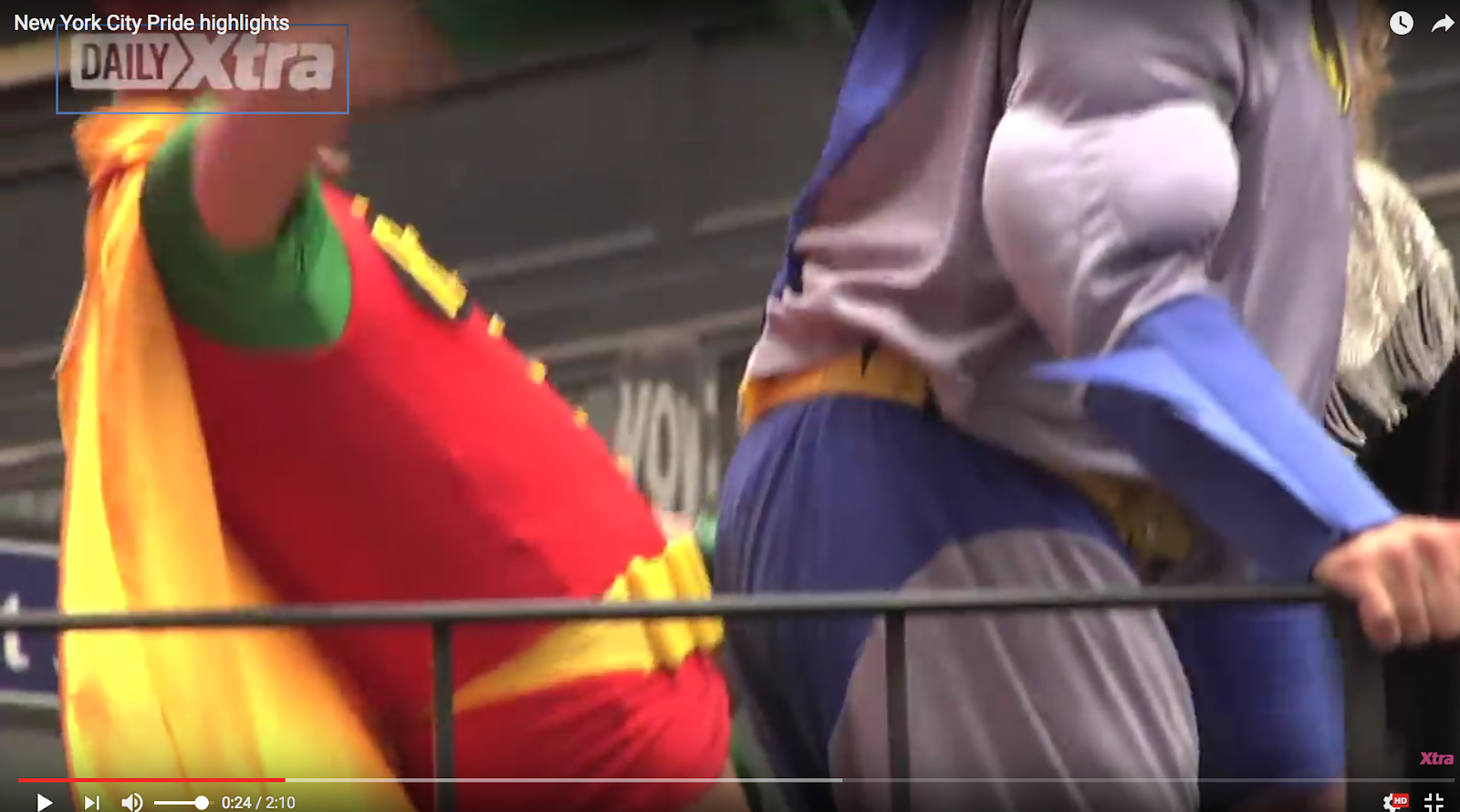 Batman and Robin did not join the parade to entertain the adults. They made an appearance for the sake of the kids along the parade route. The LGBT community often displays wanton disregard for children as they delight in shocking and scandalizing both children and adults.

As evidenced by the off-camera comments of adults in the video about the little girl that YouTube removed, the LGBT world happily amuses itself with the destruction of innocence in the young. They might not do so in their private lives, but in public the LGBT group dynamic takes over, raising scandalizing kids to a type of competitive sport.

YouTube’s warning about the “sexualization of minors” is especially important as parents everywhere are being encouraged to show their support for the LGBT movement by taking their young children to “gay pride” parades and celebrations.

Radio Canada went so far last summer as to nonchalantly tell parents to “be open-minded. Your kids will probably see boobs and penises. There will be bodies of all shapes, sizes and in all states of undress.”

Celebrity parents such as Jim Gaffigan are quick to comply, proudly posting pictures of their “gay” kids on social media. 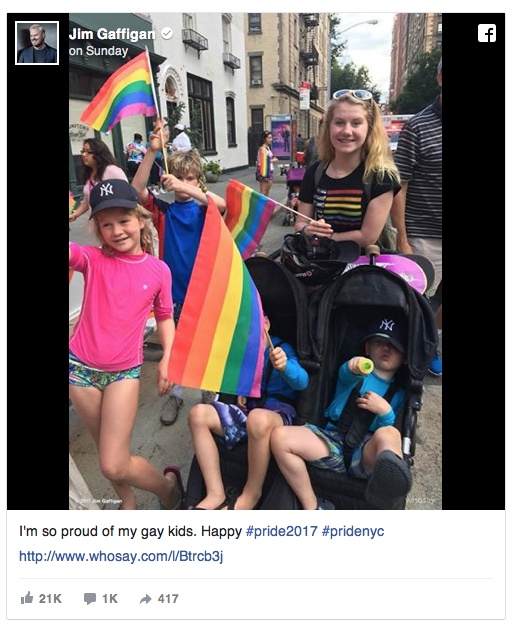 Jonathon Van Maren, blogging about the heartbreaking video at The Bridgehead, said, “For some reason, this is not considered child abuse, and is not considered creepy. Rather, the penises of Gay Pride revelers are now supposed to be interesting discussion opportunities for little kids who need to be sexually developed and open-minded.”

So at one and the same time, “Bravo!” and “Shame on you” YouTube, for your selective moral outrage that continues to allow for the super-sexualization of children.