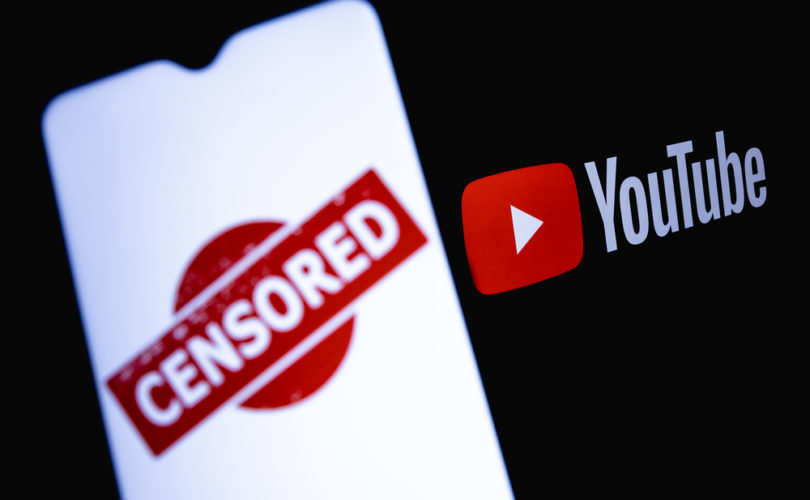 (LifeSiteNews) — YouTube removed a traditional Catholic channel’s entire set of videos, consisting mostly of sermons, without warning on Monday morning. The account was restored later in the day after the tech giant said it reviewed the ban and decided the channel didn’t violate their terms of service.

Sensus Fidelium announced that the Big Tech company, which is owned by Google, had told them it found “severe or repeated violations” of its “Community Guidelines.” It accused the page of violating the policy on “spam, scams, or commercially deceptive content.”

But Sensus Fidelium said its account did not have any policy violation strikes. “Thus eliminating 8-9 yrs of 4000+ videos in a snap without warning,” the Sensus Fidelium website stated.

no strikes, no warnings, you just boot me? @YouTube

Later in the day, Sensus Fidelium tweeted that its channel had been restored.

Channel is back but email says it’s still suspended pic.twitter.com/hJa2kdl4Sn

The account regularly posts sermons from priests, conferences, and videos about the lives of the saints.

Steve Cunningham, who runs the page, asked for support.

“Now I’ve seen this coming for years hence why I have content on Rumble, Bitchute, Odysee, UGETube, GloriaTV, GabTV, and Brighteon,” Cunningham wrote. “I’ll appeal the decision but who knows it it will be re-instated or not. I do have a hard drive with all the videos backed up but it will take time to upload the rest on those channels and the future videos I had, and many unlisted that are only available on this website.”

LifeSiteNews emailed Google on Monday morning but only received an automatic acknowledgement response.

Cunningham said he is not sure why his page has been banned. He said he has been “careful” to not post about topics such as vaccines and COVID-19 that often trigger YouTube bans.

“It’s going to take a couple days to hear anything back probably, I’m not expecting anything by the end of the week,” Cunningham told Restoring the Faith.

“They’re supposed to give you at least a strike first,” Cunningham said. He said he is open to legal action based on how the YouTube appeal goes.

This is not the first time that a right-leaning page has been removed by the Big Tech company.

Skeptics of man-made climate change will also find their videos banned under a new policy.

Google announced that it would ban ads and monetized content that challenged the “well-established scientific consensus around the existence and causes of climate change.”