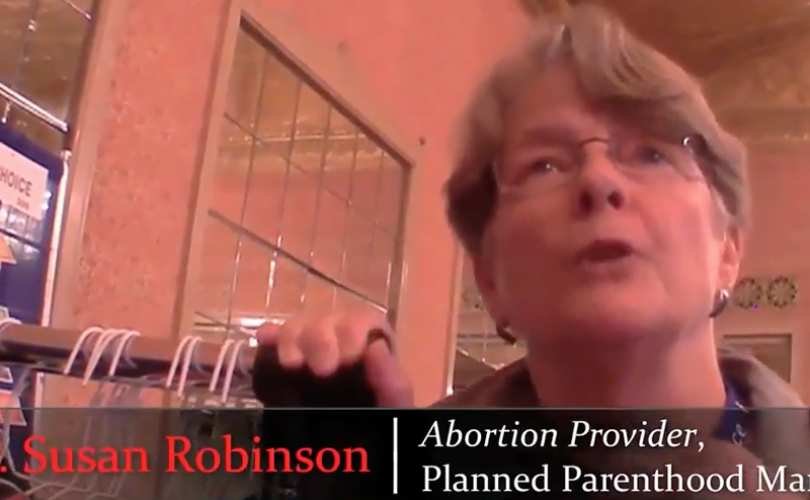 May 26, 2017 (LifeSiteNews) – YouTube removed the latest Center for Medical Progress (CMP) exposé of the abortion industry and subsequently removed a copy of it LifeSiteNews saved and posted to YouTube.

The video contained footage from the National Abortion Federation (NAF) conference during which abortionists admit they work they do is “killing,” complain about how “difficult” it is to tear apart a fetus, and lament that they’re not given a place to discuss the “heads that get stuck that we can’t get out.”

The copy of the video LifeSiteNews uploaded was marked by YouTube as containing “inappropriate content.” YouTube says it offers users a chance to appeal such a designation, but there was no mechanism available through which LifeSiteNews could attempt to do so.

“We believe everyone should have easy, open access to information and that video is a powerful force for education, building understanding, and documenting world events, big and small,” YouTube says of its values. “Our mission is to give everyone a voice.”

A judge’s gag order prevented this footage from being released for over a year after NAF took CMP to court over the footage. Some of this footage was previously leaked by Got News.

Along with the release of this footage, Daleiden's attorneys also named the people accusing him and his co-worker Sandra Merritt in the 15 felonies with which he is charged. They are charged with “intentionally and without the consent of all parties” involved recording “confidential” communications.

Originally, those accusing Daleiden and Merritt weren't named, but rather were listed as anonymous “Does.”

“The First Amendment must apply equally whether you are pro-choice or pro-life,” said former Los Angeles County Deputy District Attorney Brentford J. Ferreira, one of Daleiden's lawyers, in a statement at the time. “And a publicly-accused defendant is entitled to face his accusers in a public trial. Anything less is a corrupt attempt by the Attorney General to orchestrate a star-chamber proceeding reminiscent of the witch hunts and show trials of more unenlightened eras.”

“The Attorney General sent SCA [Steve Cooley & Associates] a password-protected list of Does 1 through 14, stating that the names were somehow confidential, rather than amending the publicly filed complaint to publicly list David’s accusers,” the lawyers explained in a press release. “There is no protective order in place in state court that would protect the names of the Does, and David is entitled to a public defense.”

Daleiden and his attorneys will appear in court for a hearing on June 14.

“There will be plenty of opportunity between now and then to formally acquaint the judge with all of the facts, not just the one side, and the law, and then we will respect his judgment,” Steve Cooley, one of the attorneys defending Daleiden, told LifeSiteNews. “I think he is anticipating more information and this is how the process starts.”

“All I know is that he [the judge] did issue an order with respect to…our posting on our Daleiden case log, which was nothing more than a repetition of what’s been made a matter of public record for some weeks by the San Francisco superior court, which is lawful and transparent on their part,” he said. “I’m not really sure why the YouTube video was pulled, other than it could have been a complaint by NAF.”

“I’ve not seen any order from the judge to YouTube,” said Cooley. “The order’s been directed towards David Daleiden and his attorneys.”

LifeSiteNews posted a copy of the CMP video to Facebook. It remains available, but LifeSite is being denied the usual option to pay to advertise it to a larger audience.

Other pro-life groups have posted the video, or portions of it, on their Facebook and Instagram accounts as well.

After YouTube pulled the video, LifeSiteNews embedded a copy of the video posted on the “Another Boy” Facebook page in stories about the latest baby body parts development. That version has now been removed from Facebook.

LifeSiteNews will provide updates on this story as they become available.