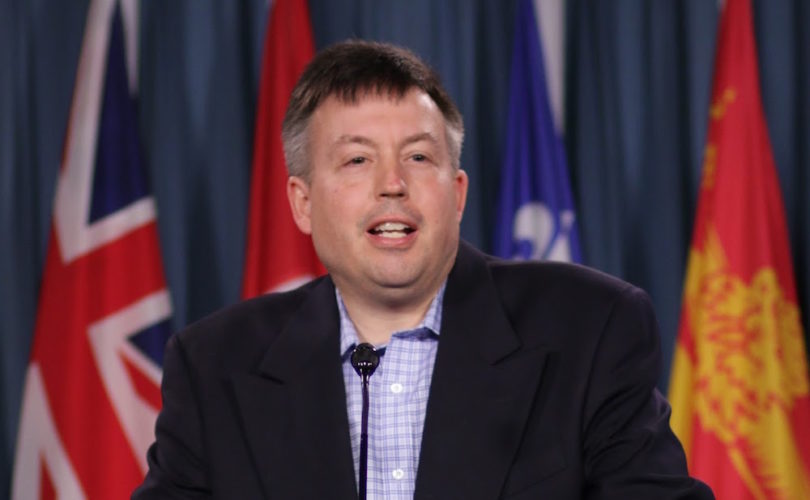 LONDON, Ontario, February 23, 2016 (LifeSiteNews) – Alex Schadenberg, the indefatigable advocate for the elderly, disabled, and vulnerable against euthanasia and assisted suicide, has been bumped from YouTube for allegedly violating the home video platform's community standards.

Schadenberg, the executive director and international voice of the London, Ontario-based Euthanasia Prevention Coalition, was interviewed by Vickie Travis, the host of her self-named internet radio show on the web-only TropicWave Radio station. It was put up on YouTube on Sunday and taken down within two hours. “The YouTube community” had determined that it was offensive, the station was told.

Travis, herself an anti-euthanasia crusader since her father was killed by a doctor in 2000, told LifeSiteNews, “Alex was pretty polite. His segment was extremely tame compared to some people I've had on.”

YouTube's provider, Google, responded to LifeSiteNews's request for an explanation with automated skepticism: “Thank you for contacting Google's press office. This email address is used exclusively for corresponding with press. If you are not a member of the press, you should not expect to receive a response from the Google press team beyond this email.”

Like Travis, Schadenberg is mystified but also amused. “A lot more people are going to listen to my comments now, because I've emailed them all about being censored, than would have if they'd just left it alone,” he said.

In the banned segment, the pair discuss recent legislation and judicial decisions. At one point, Schadenberg notes that recent laws permitting euthanasia or assisted suicide have focused on protecting doctors who kill their patients from homicide charges. “But the laws provide no effective oversight,” he told Travis. “The argument for these things is patients' rights – it's your body, it's your choice, but the laws provide no means to determine if it really was your choice.”

YouTube's community guidelines, which begin with “We're  not asking for the kind of respect reserved for nuns, the elderly, and brain surgeons” – boil down to no nudity, pornography or graphic sex, no encouragement of dangerous activities, and no violence, hatred or threats. They concentrate on imagery, whereas the offending Schadenberg-Travis interview is an audio segment without imagery.

“That tells you it was the content that was offensive. Euthanasia is big business, so  powerful forces were offended,” Tropic Wave Radio operator Peter Kawaja told LifeSiteNews. In his view, euthanasia eliminates costly patients and costly welfare recipients, reducing costs for hospitals, hospices and governments. “There are far worse things on YouTube.”

Tropic Wave Radio has now received one “strike.” If it gets two more within a certain time span, it too is bumped off YouTube. But Kawaja isn't worried by that. “It isn't the main way we deliver our programs.”

Travis said YouTube as a private operation can “do what it likes, but if it does this, it is moving in a very dangerous direction. My generation, the post-WW2 generation, we were taught from the moment we were born not to shut up about anything. To speak up. Not speaking up was how those horrible things happened in Germany. When you suppress the truth, then who will protect very vulnerable groups that need protecting?”

Why assisted suicide is a poison pill