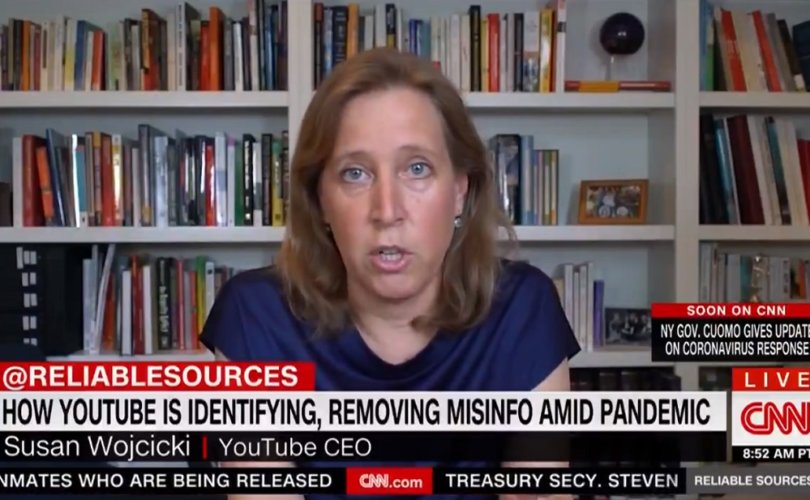 April 22, 2020 (LifeSiteNews) – Susan Wojcicki, the CEO of YouTube, announced that all content contradicting the Word Health Organization (WHO) on the coronavirus pandemic will be removed from the video platform.

During a CNN interview last Sunday, Wojcicki explained there was “a 75 percent increase in the news coming from authoritative sources since the beginning of 2020. So, we have seen a lot of demand there.”

“But then we also talk about removing information that is problematic,” she continued. “Of course, anything that is medically unsubstantiated. So people saying, like, take vitamin C, you know, take turmeric, like, those are — will cure you. Those are the examples of things that would be a violation of our policy.”

She then specified that “[a]nything that would go against World Health Organization recommendations would be a violation of our policy. And so remove is another really important part of our policy.”

One example of content removed from YouTube was the claim that 5G, the new generation of wireless communication technologies, “was causing coronavirus symptoms,” Wojcicki said.

Senator Marsha Blackburn tweeted that “[i]t is alarming that [YouTube] now relies on the [WHO]’s biased recommendations to decide what video content to take down.”

“The [WHO] gave inaccurate information about the spread of the virus, still parrots Chinese propaganda, and fought [President Donald Trump]’s China travel ban,” the junior senator from Tennessee pointed out.

“If Big Tech companies plan to police speech surrounding COVID-19, they need to rely on honest and objective experts. History repeats itself and [WHO]  has proven to be untrustworthy promoters of Chinese propaganda.”

It is alarming that @YouTube now relies on the @WHO’s biased recommendations to decide what video content to take down.

The @WHO gave inaccurate information about the spread of the virus, still parrots Chinese propaganda, and fought @realDonaldTrump’s China travel ban. pic.twitter.com/eTG9JG2eRs

If Big Tech companies plan to police speech surrounding COVID-19, they need to rely on honest and objective experts.

History repeats itself and @WHO has proven to be untrustworthy promoters of Chinese propaganda.

“American taxpayers provide between $400 million and $500 million per year to the WHO. In contrast, China contributes roughly $40 million,” Trump said.

“As the organization’s leading sponsor, the United States has a duty to insist on full accountability. One of the most dangerous and costly decisions from the WHO was its disastrous decision to oppose travel restrictions from China and other nations,” he explained.

“They were very much opposed to what we did. Fortunately, I was not convinced and suspended travel from China,” Trump added. “The WHO’s attack on travel restrictions put political correctness above lifesaving measures.”

Pro-lifers have long opposed the WHO over its support of abortion. They praised Trump for his suspension of funding for the organization that is a part of the United Nations.

“This is a brilliant and brave move from President Trump,” said John Smeaton, director of the Society for the Protection of Unborn Children.

“Not only has the World Health Organisation been planning for years to promote abortion in a COVID-19-type pandemic, it has become abundantly clear even to the secular world that the WHO is serving the world’s most corrupt power structures rather than the common good,” he commented.

Fr. Frank Pavone, national director of Priests for Life, said the president’s “withholding of funds from the WHO is yet another in a long series of decisive, courageous decisions in dealing with [COVID-19] and in protecting Americans and their families, in sharp contrast to the failed leadership of Joe Biden.”

YouTube is not the only social media giant using its position of power to censor unwelcome content. Facebook founder and CEO Mark Zuckerberg announced earlier this week that he considers protests against stay-at-home orders, which are often planned via Facebook, to be “harmful misinformation” that must be deleted.