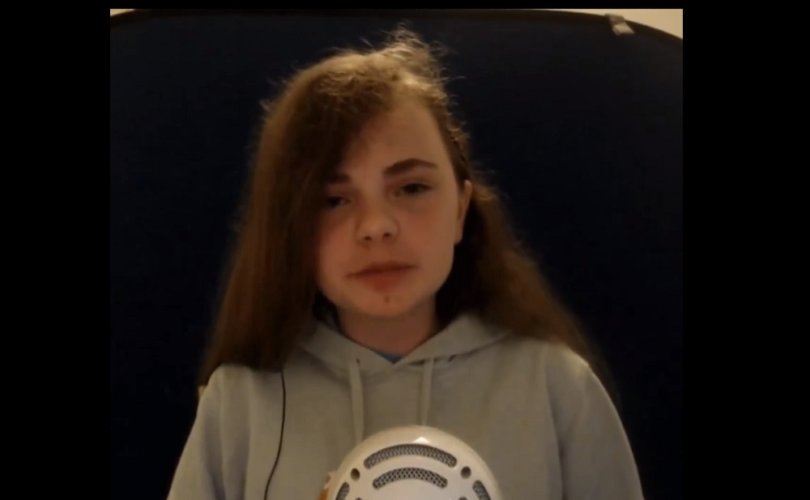 August 7, 2019 (NewsBusters) — The left has no problem with hiding behind activist teenagers, but will scapegoat a right-wing one if she criticizes them.

YouTube, Google's sister company, deplatformed a 14-year-old conservative girl after she made a video criticizing Pride Month. Her channel has been completely banned from YouTube.

Soph, known on Twitter as @sewernugget, has been penalized by YouTube previously with suspension for “dangerous” humor and poking fun at leftist orthodoxy. With approximately 1 million subscribers before she was shut down, she rose to fame for poking fun at topics such as radical Islam, climate change, and pedophilia among Hollywood elites.

While her channel has been removed, conservative pundits like BlazeTV host Lauren Chen have reported on its removal, reviewing the content and theorizing why it was taken down.

Chen featured one clip from Soph's video “Pride and Prejudice” which got her banned. In the video she commented on the nature of LGBT politics: “When you attack the concept of gay pride for what they're doing to children” the left will respond by attacking the critic as someone who hates all gay people, she explained. “It's morality laundering, they put the indefensible together with the legitimate so that you can't scrutinize it without being called a homophobe.”

The video then shows a young boy doing a butt gyrating dance known as “twerking” at a gay pride event in public.

Soph followed by going biblical, which might be shocking to hear from such a young and irreverent Youtuber:

Just like Cain murdering his brother for doing better than him, there is resentment against heterosexual couples because gays know that whatever meaning they manage to squeeze out of their relationships will never hold a candle to procreation. Additionally, since they can't reproduce, they have to recruit, so it's beneficial for them to wreck the familial unit.

The video and Soph's entire channel was then swiftly banned from the platform, with a letter saying “Our team has reviewed your content and, unfortunately we think it violates our hate speech policy.”

Chen then cited another account, YouTuber 1791's view, that YouTube is full of left-wing commentators who use just as incendiary rhetoric (if not more-so) with no consequences.

The example 1791 cited is a black YouTuber talking about why she is in favor of punching Nazis because they “didn't get that urge punched out of them in childhood.”

Liberal YouTuber Steven Bonnell, aka Destiny, with more than 200,000 subscribers, has also called for violence as NewsBusters previously reported. He said things such as “I've moved full on to the real violence level when it comes to conservative people, yeah, I think they need to be excised from my f—— country, I think they are demonstrably f—— evil people.”

One fellow irreverent YouTuber Johnny Massacre posted a review and reaction to Soph's ban and condemned YouTube for it stranglehold on political conversation. “YouTube is the most powerful website in the world, behind Google, both them owned by the same company and they're just controlling what people can and can't say.” He added later that Big Tech is “just a bunch of hardcore liberals controlling the flow of information all throughout the world.”