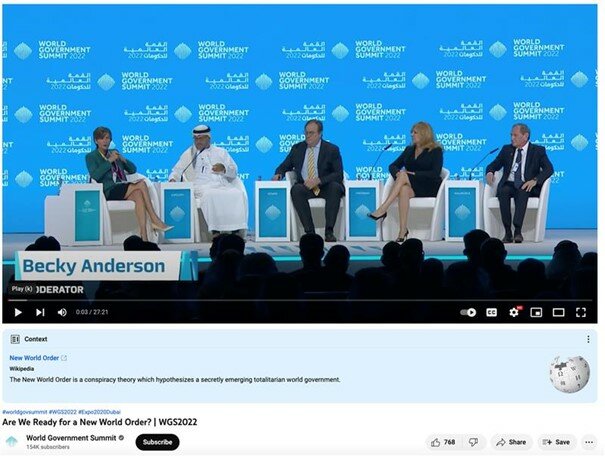 (LifeSiteNews) – YouTube put a disclaimer on video by the verified account of the “World Government Summit,” calling it a conspiracy theory.

The video is titled “Are We Ready for a New World Order?” and features a discussion at the World Government Summit 2022 with several high-profile participants including presidential advisers, CEOs of think tanks, and economists. It is moderated by CNN anchor Becky Anderson.

The flagging of this video by the official account of the Word Government Summit as a conspiracy theory reveals the absurdity of these context disclaimers.

The practice by big tech social media platforms of putting “disclaimers” beneath posts that challenge mainstream narratives was widely used during the COVID crisis. For instance, Twitter labeled many of President Donald Trump’s tweets “misleading and potentially harmful,” even one about his own health that turned out to be correct.

Many have called out the absurdity of labeling the video of the World Government Summit as a conspiracy theory.

“Folks, we’re officially at the point where reality has been labeled a ‘conspiracy theory’ by our wonderful corporate keepers,” a writer named Cardinal Pritchard wrote in an article for Not the Bee. “Yes, even though these are real world leaders discussing a real plan for world government, YouTube decided that yes, global governance is still a conspiracy theory and you’d better not look into it because it’s not real.”

Journalist and YouTuber Tim Pool also commented on the incident in a tweet:

The “World Government Summit 2022” literally asks “Are you ready for a new world order” and youtube is like “this official and VERIFIED video is a conspiracy” pic.twitter.com/s3uvWCNsjj

The term New World Order has been used throughout the 20th and 21st century, beginning with U.S. President Woodrow Wilson and the formation of the League of Nations, the predecessor of the United Nations. The phrase was also used by George H.W. Bush during a presidential address in 1990.

During the COVID crisis, the term has been used by multiple government officials as a reference to a new globalist order with centralized control and surveillance. This New World Order would be ushered in after the Great Reset, a term coined by World Economic founder Klaus Schwab, was successful.

Cardinal Gerhard Müller has called the New World Order “diabolic,” and named billionaires Bill Gates and George Soros as proponents of the plan.