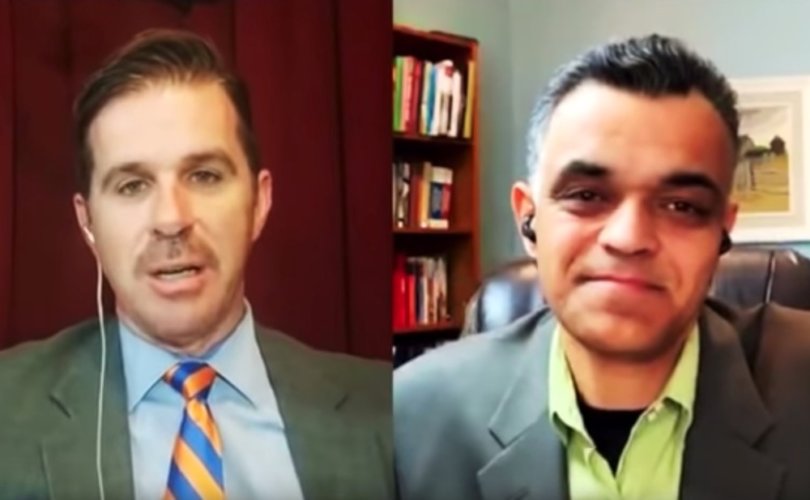 May 6, 2019 (LifeSiteNews) — YouTube demonetized a video conversation between Catholic evangelist Patrick Coffin and LifeSiteNews co-founder and editor-in-chief John-Henry Westen this week, the video-sharing platform saying it had “confirmed it wasn’t suitable for all advertisers.”

Such things are happening to Christians and conservatives with greater frequency, but Coffin said the effort to quell his message signifies he’s doing something right in proclaiming the Gospel.

“Ask yourself why more Christian media outlets are not being deplatformed and demonetized,” he said. “There’s a terrible dearth of boldness among Catholics and other Christians, which is rooted in fear, and that’s a subtle rejection of the Holy Spirit.”

“I talk about this and related issues all the time on my podcast and inside the membership site. Getting shunned and shunted by Big Tech because of the Gospel without compromise is a sign of things going right!”

Coffin has had six or seven YouTube videos demonetized out of more than 120 since starting his Catholic media apostolate more than two years ago, and he says in his experience, it’s usually subjects that go against the politically correct grain of the world today.

“I have done over 120 episodes of The Patrick Coffin Show and one livestream,” he said, “but the only ones demonetized have dealt with transgender confusion, resolving the homosexual compulsion through therapy, prayer, and masculine-led affirmation, the damage done by the sexual revolution, and anything with the word Muslim or Islam in the title.”

“Those topics,” said Coffin, “in my anecdotal experience, draw the attention and ire of the word-combination logarithms used by Big Tech to censor political incorrectness, which has been (quite successfully) rebranded as fomenting ‘hate.’

“According to the M.O. of previous ad removals by YouTube, we discussed homosexual behavior in a way that doesn't jibe with the spiritus mundi,” he added.

Coffin had reached out to some top influencers who are media-savvy and practicing their Catholic faith a few weeks ago, he said, and Westen was one of his first picks for his new 8 P.M. livestream on Wednesdays.

“I told him it’s not an interview per se,” recounted Coffin, “just a live conversation about events in and out of the Church, in which we comment on the questions that roll in or discuss things together.”

The conversation was livestreamed on Wednesday, May 1, and the next day, YouTube informed him it had demonetized the video.

Demonetization means that the YouTube page-owner cannot earn revenue from the ads that typically scroll before viewers before the video begins.

“Hi PatrickCoffin.media,” the YouTube message to Coffin opened. “After manually reviewing your video, we’ve confirmed that it isn’t suitable for all advertisers. As a result, it will continue to run limited or no ads.”

It then identified the video: “A Livestream with John-Henry Westen.”

“Welcome to soft deplatforming,” he said. “I can't even have a conversation with John-Henry Westen without our betters at YouTube deigning to remove all ads. ‘Free speech for me but not for thee.’ —Nat Henthoff.”

“‘Isn’t suitable for all advertisers’ is YouTube boilerplate language for ‘our central committee decided we didn’t like your views,’” Coffin told LifeSiteNews. “How can they know what all advertisers find suitable or unsuitable unless they polled them or called each of them on the phone about it?”

Coffin said his conversation with Westen was a basic, lively exchange about several news events.

It included the recent open letter from clergy and scholars accusing Pope Francis of heresy; how it’s been a slow process for some to recognize and acknowledge the regular ambiguities put forth by the pope, Francis’s strategy for hiring homosexualists and hard-left advisers as his main advisory staff and his selective firing of Catholic prelates deemed too rigid or anti-pastoral, the attitude of the left toward free speech, the Kim Davis affair and how it was misreported by Vatican press staff, the problem of homosexual cliques in the seminaries as noted by Pope Emeritus Benedict XVI, and thoughts about Benedict’s abdication.

Coffin has objected to YouTube’s removal ads in the past and said he’s learned that when officials say they did “manual review,” that’s the “final kibosh.”

It would be inordinately time-consuming and likely futile to pursue an appeal with the Google-owned video-sharing giant, and he said his is a minor case compared to what’s happened to others.

“I could spend my whole life fighting ad strikes,” he said, “as YouTube knows.”

“Other folks, such as Steven Crowder, have gotten the same one-sided treatment,” said Coffin. “In Steven’s case, [it was] worse. Or they’ve been completely banned for life, like Milo Yiannopoulos.”

The experience is a sad commentary on the fear media CEOs feel when confronted with contrary viewpoints, Coffin told LifeSiteNews.

“Demonetizing, deplatforming, depersoning through total bans on social media platform only radicalizes people,” stated Coffin, “further deepening the enmity between groups and fostering echo chambers instead of an open marketplace of ideas. Classic liberals understand this. The left does not.”

Coffin launched his media apostolate in late 2016 after seven years of hosting Catholic Answers Live to bring a “badly needed platform of hope” to the culture. Coffin told LifeSiteNews that minus such go-rounds with suppression of ideas, his evangelization and apologetics media venture is going amazingly well, with The Patrick Coffin Show getting regular downloads in 110 countries.

“People are fed up with The Establishment Catholic Media,” he said, “and want tools to repair the DNA damage to the culture, despite the man in the white hat in Rome at this time.”

Coffin said he plans to keep on doing exactly what he’s been doing, only more frequently and with greater commitment.

“By God's grace,” he said, “my beloved members of Coffin Nation community support the effort to repair the damage done to the cultural DNA, so to speak, through personal transformation in Christ, growing in productivity, living the full life Jesus promises in John 10:10 (‘The thief comes only to steal and kill and destroy. I came that they may have life, and have it abundantly’).