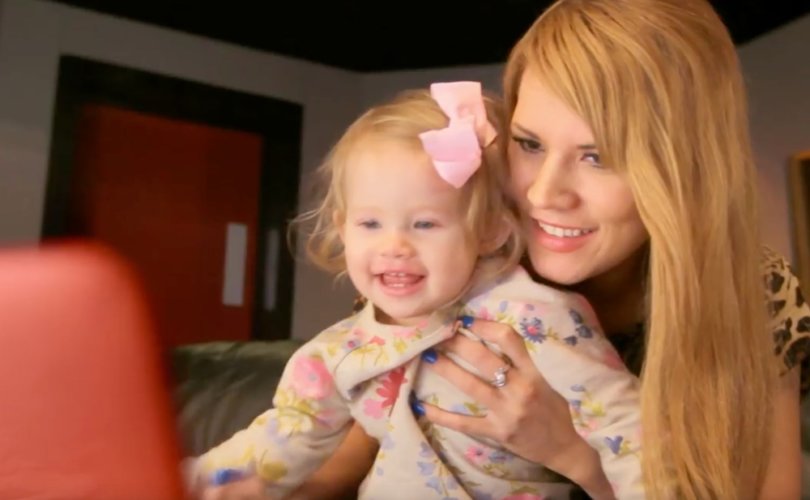 SUMTER, South Carolina, March 22, 2018, (LifeSiteNews) – Kimberly Henderson is a musician who rose to prominence in 2014 thanks to a viral video of her singing to her baby daughter Vaida. And it would never have happened had God not convinced her to walk out of an abortion facility the year before.

On Monday, the Daily Wire revisited Henderson’s story, which she details in full on Facebook. “I sat in the abortion clinic for nearly 7 hours,” she writes. “I remember wearing a pink t shirt that was soaking wet from crying.” She had made the March 15, 2013 visit out of fear of having another child all alone, her outlook further worsened by a cheating boyfriend and fear of what others might think of her.

Despite part of her being desperate to justify the abortion and feeling she had no other choice, Henderson says a heavy heart kept her in conflict and desperate for a divine signal of what to do. “I prayed God would stop and give me a sign, give me the strength to get up and walk out of here,” she says…which is exactly what happened next.

When she was finally called to the front desk, Henderson says that fumbling through her wallet caused a card she had received the previous Saturday to fall out. It was a church card bearing Isaiah 41:10:

“Don't be afraid, for I am with you. Don't be discouraged, for I am your God. I will strengthen you and help you. I will hold you up with my victorious right hand.”

Henderson is convinced God was speaking to her through that card, which finally gave her the will to turn around.

On her way out the door, a girl Henderson estimates to be 19 years old lamented, “I wish I could be brave like you.” Henderson told her she could do the same thing, but the girl replied that unspecified “serious circumstances” left her with no other choice.

Before they parted, though, the girl told her, “When you see your baby's face for the first time you're gonna be so glad you walked out of here today.”

Today, Henderson is more than glad; she is fulfilled.

“My daughter Vaida Everly has a purpose. Her name means beautiful life. And lord she is just that,” Henderson writes, a source of inexplicable joy such that “if a war was going on outside I wouldn't even know it.”

Just two months after that first video went viral, Henderson was contacted to professionally record a single, “Tiny Hearts,” based on her story. Her musical career has skyrocketed since, leading her to speak with multiple record labels and songwriters, acquire a business manager, and as of the time of this writing, amass more than nine million YouTube views.

Ultimately, Henderson believes the experience was God’s way of “showing me that HIS plan is and will always be greater and bigger than anything and everything I've ever known […] No matter what your circumstances are God doesn't make mistakes and he is here for you.”