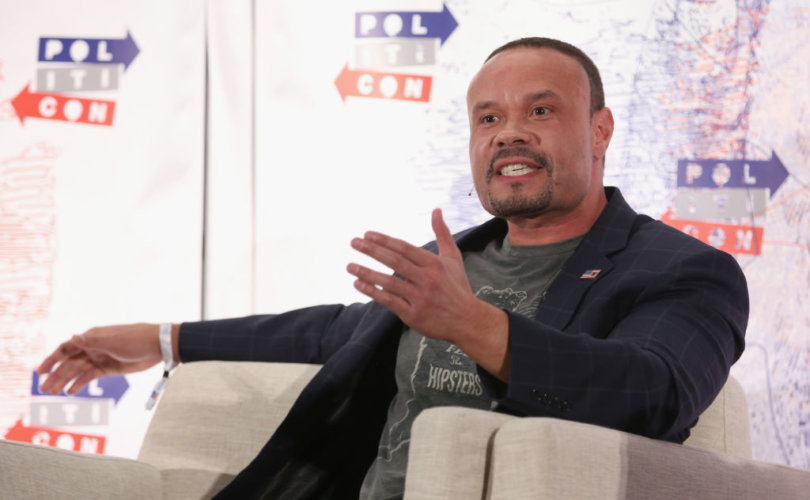 (LifeSiteNews) — YouTube suspended and demonetized the account of conservative commentator Dan Bongino on Friday after he said masks are not effective at stopping the spread of COVID.

“We removed a video for violating our policies on COVID-19 misinformation, specifically for comments that masks are useless, resulting in a first strike on the channel,” YouTube confirmed to The Daily Beast.

The ban on uploading will last for one week because this is his first “strike.” He has also been removed from the ads program that monetizes creator content.

The publication did not report what specifically Bongino said. The Post Millennial said it was for “questioning ‘mask fascists,’” though that could come from a phrase his social media team used in a subsequent tweet about the situation.

Bongino responded by challenging YouTube to remove his page and promoting alternative platform Rumble. He is an investor in the tech platform.

“Nice to meet you,” Bongino wrote to a YouTube employee named “Coco.”

“I was sent your email about YouTube’s suspension of my channel. If I said I was surprised here, I’d be lying. We knew it was just a matter of time before the tyrannical, free-speech hating, [expletive], big tech [expletive] you work for would try to silence us,” Bongino said.

“I anxiously waited for this moment however, as I said on my show many times,” he said. He said that “thankfully” he is an investor in Rumble where he has “double the number of followers” than his YouTube page.

I guess they were waiting for an apology from us. But that’s not quite how it worked out for them. Here’s Dan’s email to “Coco” at YouTube telling them to plant a big wet kiss on his ass pic.twitter.com/4yFeprnr3Y

“I will immediately post content questioning why masks have been totally ineffective in stopping this pandemic,” he said. “I dare you to do something about it.

LifeSiteNews has compiled a list of 47 studies that confirm masks are ineffective and another 32 that show they can have detrimental health effects. The German equivalent of the supposedly high-quality N95 masks have been proven to harm a child’s ability to breathe.

Meanwhile, public health establishment has begun to say that cloth masks are not effective for stopping the spread of COVID. Frequent CNN commentator Leana Wen has called them “facial decorations.”

Meanwhile, Rumble used the controversy to promote its page and free speech and debate.

“Dan Bongino, one of the most vocal supporters of free speech and the 1st amendment was just suspended on YouTube where their CEO says free speech is a ‘core value,’” Rumble wrote.

“Freedom of expression is a human right, full stop. [Dan Bongino] & all creators, we have your back. #StandWithDan,” Rumble tweeted on Jan. 14.

Dan Bongino, one of the most vocal supporters of free speech and the 1st amendment was just suspended on YouTube where their CEO says free speech is a “core value”. 🤨

Freedom of expression is a human right, full stop. @dbongino & all creators, we have your back. #StandWithDan

Bongino has previously used his platform to defend free speech. He dropped a lucrative advertising deal with home security company SimpliSafe after it refused to advertise with right-leaning Post Millennial.