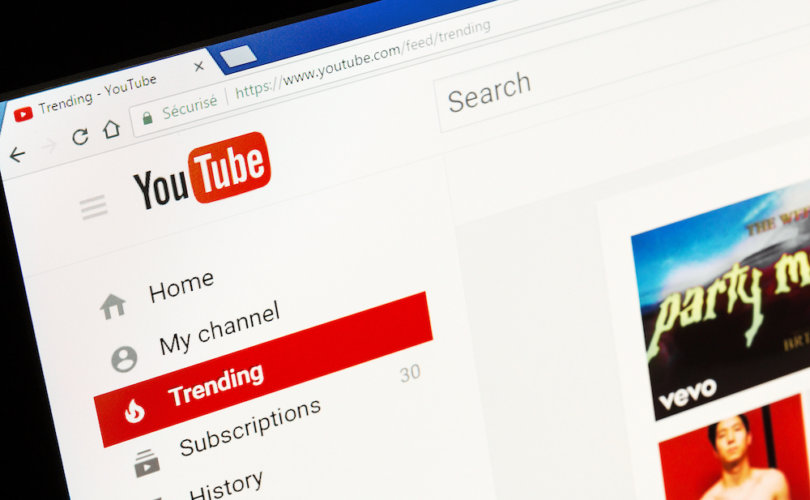 November 27, 2017 (LifeSiteNews) – YouTube users are sounding the alarm after discovering the video site's autofill feature suggested sexual perversion between parents and their children after the phrase “how to have…” was entered.

As people typed in search terms beginning “how to have …” YouTube’s time-saving autofill offered offending suggestions such as “how to have s*x with your kids” and “how to have s * x kids” at the top of the list of search suggestions. Since yesterday, these search results have been confirmed by dozens of people to LifeSiteNews.

It appears that the following through with the suggestion “how to have s*x with your kids” did not lead to any sexually explicit content.

According to a BuzzFeed News report, a YouTube says the matter is still under investigation.

“Earlier today our teams were alerted to this awful autocomplete result and we worked to quickly remove it,’ the company said. ‘We are investigating this matter to determine what was behind the appearance of this autocompletion.”

Youtube pundits believe the disgusting autofill suggestion is the result of trolling.

“Looks like someone figured out a good way of playing with the rankings on youtube and got a ‘how to have s*x with your kids’ to autofill in the search bar,” said Youtube commentator, Defango, on his channel.

“Somebody’s manipulating the search range right now,” he continued. “Really weird channels seem to be resurging this and now all of a sudden the results are getting pushed up to the top.  … this is how a viral video stages itself to move up … because if you follow the relevancy in the titles you can see exactly where the fire started and how it starts to blow out through the YouTube system.”

It “looks like somebody has been messing with the YouTube algorithm in a very very interesting way,” he said.

“The results are very specific and could be the result of a coordinated campaign to game the algorithm,” reported Buzzfeed News. “Motivated trolls, for example, could theoretically search for “how to have s*x with your kids” with enough frequency in order to make the search result appear far more popular than it is.”

One commenter noticed YouTube’s hypocrisy of allowing its auto-complete to suggest sexual abuse of children while it has censored conservative channels it deems too controversial.

“I actually think it’s insanely hypocritical that Google and YouTube will censor opinions and censor beliefs that they don’t like. They’ll censor people like me and many others and all the while that they’re demonetizing content and accusing people of ‘wrong think,’ they’re allowing child endangerment, they’re allowing dangerous people on the platform in the kid’s section and the kid’s app and their suggestions have this stuff,” he said.

“I think it’s clear: Google and YouTube has (sic) a serious problem and someone has to do something about it. Maybe Google and YouTube should stop attacking innocent and legitimate content creators and go after the real problem. And now it’s immortalized for everyone to see. I’m going to post this everywhere,” he added.

YouTube has a history of selective censorship, especially when it comes to conservative, religious, pro-marriage and pro-family groups.

Though the video portrayed children being sexually-corrupted by adults, YouTube has chosen not to censor it.

Also earlier this year, LifeSiteNews posted a story about a shocking video showing a little girl waving a rainbow flag in front of a nearly nude male dancer during a “gay pride” celebration. The video demonstrated the super-sexualization that happens to children through exposure to “Gay Pride” events, which often display full or partial nudity and provocative simulated sex or dance.

YouTube quickly removed the video and issued a warning to LifeSiteNews that the video-sharing site “isn’t the place for nudity or sexually provocative content.”

“Sexual content involving minors is particularly sensitive. YouTube prohibits uploading, commenting, or engaging in any type of activity that sexualizes minors,” it said.

While Youtube claims to prohibit “engaging in any type of activity that sexualizes minors,” it remains to be seen how it will explain how its algorithms permit search topics such as “how to have s*x with your kids.”