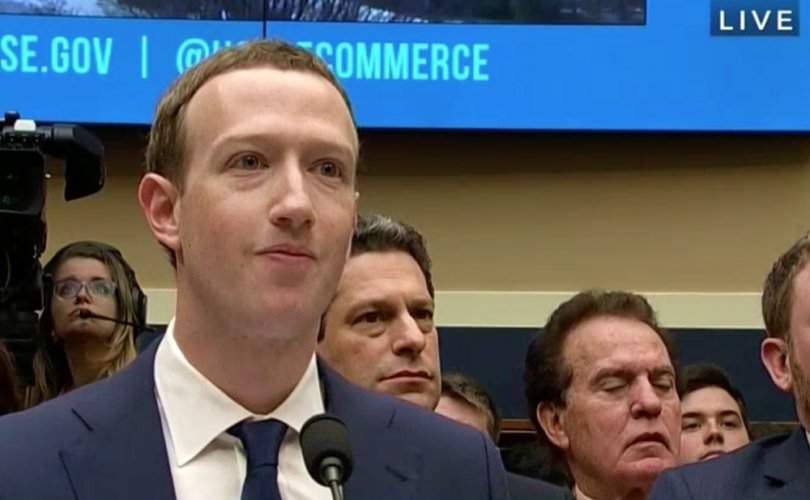 June 29, 2020 (LifeSiteNews) – After several days of public pressure, Facebook founder and CEO Mark Zuckerberg is submitting to the demands of a coalition of advertisers who have complained that the social network doesn’t do enough to censor or discredit conservative speech.

The Anti-Defamation League, NAACP, Sleeping Giants, Color of Change, Free Press, and Common Sense have accused Facebook of “allow(ing) incitement to violence against protesters fighting for racial justice in America in the wake of George Floyd, Breonna Taylor, Tony McDade, Ahmaud Arbery, Rayshard Brooks and so many others”; of legitimizing conservative news outlets Breitbart and the Daily Caller; and of “turn(ing) a blind eye to blatant voter suppression on their platform.”

The coalition demands that Facebook create new layers of moderation and engagement for targets of “identity-based hate,” to take steps to ensure ad revenue does not support “content labeled as misinformation or hate,” and to more closely monitor “extremism” in private Facebook groups. Verizon, Ben & Jerry’s, Patagonia, and REI are among the companies they got to agree to halt Facebook ads.

On Friday, Zuckerberg announced a handful of changes the company would be making to its policies, ostensibly in the name of “extra precautions to help everyone stay safe, stay informed, and ultimately use their voice where it matters most — voting.”

Among those changes, he says Facebook is “prohibiting a wider category of hateful content in ads. Specifically, we're expanding our ads policy to prohibit claims that people from a specific race, ethnicity, national origin, religious affiliation, caste, sexual orientation, gender identity or immigration status are a threat to the physical safety, health or survival of others. We're also expanding our policies to better protect immigrants, migrants, refugees and asylum seekers from ads suggesting these groups are inferior or expressing contempt, dismissal or disgust directed at them.”

Breitbart senior tech correspondent Allum Bokhari suspects this change is a mere pretext to suppress one of President Donald Trump’s most popular campaign messages. “Pointing out the empirical that mass illegal immigration leads to rising crime and disorder was a major element of Trump’s 2016 campaign,” he writes, “and also features strongly in the campaigns of European right-wing populists such as Matteo Salvini and Viktor Orban, who have enjoyed considerable electoral success over the past five years.”

Facebook will also copy Twitter’s practice of putting warning labels on posts from political candidates or officeholders that are deemed beyond the pale. “We'll allow people to share this content to condemn it, just like we do with other problematic content, because this is an important part of how we discuss what's acceptable in our society,” Zuckerberg writes, “but we'll add a prompt to tell people that the content they're sharing may violate our policies.”

This change, and the protests that brought it about, is widely understood to be a reference to a social media post by Trump declaring that “THUGS” among the protesters, who had been filmed engaging in violent acts such as smashing storefronts and setting buildings on fire, were “dishonoring the memory of George Floyd, and I won’t let that happen. Just spoke to Governor Tim Walz and told him that the Military is with him all the way. Any difficulty and we will assume control but, when the looting starts, the shooting starts.”

Twitter set off a firestorm last month when it placed a warning over the tweet, claiming that it “violated the Twitter rules about glorifying violence.” Pressure quickly mounted for Facebook to do the same, which Zuckerberg initially declined to follow its lead, but soon suggested the company’s policies on the matter would “evolve” in the wake of employee protests.

Conservatives, however, say further appeasement of the Left is the last thing Facebook needs to do, given the platform’s history of suppressing conservative content under vague or false pretenses.

Most recently, a pair of whistleblowers came forward to attest that Facebook aggressively discriminates against conservatives on a global scale for the purpose of influencing election outcomes.

One of the insiders provided footage of content moderators openly discussing how they would like to delete “every Donald Trump post I see on the timeline” and “delete all Republicans…for terrorism” if they so much as post a photo “wearing a MAGA hat.” Cognizant service delivery manager Demian Gordon can also be seen saying he would not hold staff accountable for taking down Trump posts, on the grounds that they “gotta get the Cheeto (Trump) out of the office.”