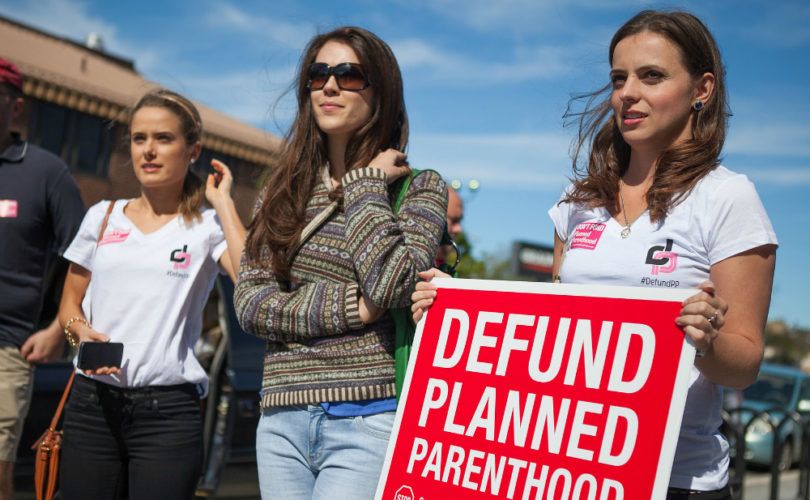 November 4, 2015 (LiveActionNews) — In today’s society, if you’re female, you’re expected to be in favor of abortion. You’re practically an outcast if you confess your pro-life views, and to be pro-life, you often have to deal with people calling you anti-feminist. But this is one of the biggest lies that exists. Anyone who cares about women, who believes in women, or who is a woman, should without a doubt be against abortion. Here’s why…

1. Abortion is an insult to all women.

2. Pregnancy is empowering, abortion is not.

Carrying your baby and giving birth while you’re going to school or working at your job or furthering your career is a feminist move. It’s also empowering to succeed when people are telling you that you can’t. You can love and care for your baby while you pursue other goals. Your children don’t have to suffer or die in order for you to succeed in other areas of your life.

3. Women are not sexual objects.

This is one of the main issues true feminism works to overcome. But abortion allows more women than ever to be treated as sex objects.

“Abortion is misogyny in action. Nothing helps men use women, and helps women (sadly) participate in their own objectification, like abortion,” says Hatten. “It’s men who treat women as objects – be they rapists, pedophiles, or just run-of-the-mill douchebags – who benefit the most from abortion. Nothing allows a woman to be used for sex and thrown away like convincing her that subjugating her fertility to someone else’s desires is liberating. That killing her own child is liberating. Women don’t get abortions because they are liberated, but because they are the opposite of liberated: coerced, trapped, ill-equipped, frightened, ashamed.”

Case in point, Live Action’s undercover videos show Planned Parenthood staffers ready and willing to work with sex traffickers in order to make money. Plus, Planned Parenthood has been caught covering up sexual abuse in order to make money off of abortion. Abortion allows women and girls to be used and abused, and the money that is to be made off of abortions means that there is no safety for abuse victims within the walls of the abortion clinic. One judge even ruled that abortion makes incest acceptable.

4. The first feminists were pro-life.

Take a look at the first days of the feminist movement, and you’ll see that true feminists are anti-abortion. From Susan B. Anthony to Elizabeth Cady Stanton, the first feminists wanted women to be treated equally, while still remaining who they are.

In fact, the first woman to receive a medical degree from an American medical school was Dr. Elizabeth Blackwell. Blackwell was hesitant to become a doctor, but she so strongly and deeply wanted to end the “destruction of motherhood” via abortion, and provide women with real health care, that she devoted her life to it.

Women and men are different, but still equal. Women don’t have to give up their fertility, their ability to grow new life, or the lives of their own children, in order to be equal to men. Fertility is not a disease. The first feminists understood that.

5. Abortion is an act of discrimination.

Women have spent decades fighting against inequality and in many ways we still are. So why would we allow the same discrimination to happen to our children? Preborn humans are equal to all other humans, whether they are male, female, completely healthy, or diagnosed prenatally with a health condition. The pro-life movement doesn’t say that fetuses are more important than women. It says that fetuses are people, too, and that since they are human beings, they deserve to be treated as such. To be pro-life means to fight for the rights of all of our children like the women of yesterday fought for equal rights for us.

6. Women are independent, and we worked hard to gain that independence.

“[…] all these women clamoring for Planned Parenthood mystify me,” said Hatten. “If you’re really a feminist, any organization that says ‘You can’t make it without us!’ should really make you suspicious and angry. Instead all these ‘feminists’ are saying, ‘Yeah we can’t do it without them!’ That is literally the opposite of feminism.”

7. Abortion is linked to mental illness.

Countless women suffer from post-abortion syndrome after they’ve had an abortion. It’s a form of post-traumatic stress disorder and includes symptoms such as feelings of guilt, anxiety, depression, and even thoughts of suicide. It affects the way a woman lives the rest of her life. It affects her relationship with her partner and with her current or future children. Jill Marquis, a post-abortive mother, said that abortion causes “devastation that you had no idea could exist.” Her previous abortion kept her at arm’s length from her children and left her feeling empty. If abortion is supposed to be the answer to women’s problems, why is it making life harder for so many women?

Did you know that Planned Parenthood offers no support if you choose life for your baby? They don’t have any programs in place to help women who are in tough circumstances but who want to choose life. That’s because Planned Parenthood isn’t in the business of giving things away for free – they made a profit of $127 million in 2014 alone. If you have your baby, they don’t stand to make a profit since they do not deliver babies and they do not provide adoption services.

Pro-life centers, on the other hand, not only help women get a plan in action, they reward them for working hard, for taking parenting classes, and for bettering themselves. Some even help them get out of debt, finish earning their degrees, and start new lives away from the troubles that had consumed them previously, so that they can move forward as independent, self-sufficient women who aren’t dependent on anyone else ever again.

9. Abortion is linked to breast cancer.

The American College of Pediatricians recently spoke out about a 2013 study linking breast cancer to abortions. The more abortions a woman has, the greater her risk of developing breast cancer. Studies from different nations concluded that induced abortion prior to 32 weeks gestation interferes with the maturation of breast cells, creating an increased risk of breast cancer. The American College of Pediatricians actually says, “Although largely ignored by the mainstream medical community, this risk information deserves a prominent place in the education of adolescent women who may, in the future consider [induced abortion].”

Each year, women spend millions preventing, fighting, and fundraising to cure breast cancer, yet their doctors aren’t telling them that abortion can contribute to it.

10. Abortion is dangerous to women’s health.

Women who walk into an abortion clinic have no idea what the true risks are because, just as with the breast cancer risk, no one tells them. Since abortion became legal, hundreds of women have been killed by the procedure. Life Dynamics reports that the reason no one knows about these deaths is because abortion proponents have been very good at keeping abortion as the cause of death off of medical documents. In addition, some states don’t even collect data on abortion deaths. Yet there are so many victims who did not live to tell their story – so many women who believed abortion was safe, and lost their lives because of it.

In addition to death, risks of abortion include infection (which can range from mild to fatal and can lead to chronic pain), perforation of the uterus, embolisms, and hemorrhaging. Women are being lied to every day, and it’s time we stood up for ourselves in honor of those who have lost their lives.

Women don’t need abortion. Women in abusive relationships, women in college, women in the workforce, women struggling financially, women who have been raped, women who are facing a health crisis – abortion is not the answer for any of them. It’s a way to cover up the real issues that women and couples face and it’s a way for businesses like Planned Parenthood to make money off of those struggles. Instead of providing practical resources to help new mothers, abortion advocates would rather abort the baby, which opens the door to an entirely new group of troubles for women and does nothing to improve her previous struggles.

“We need to liberate ourselves from the very idea that we need abortion,” said Hatten. “It’s difficult for me to understand how people who call themselves feminists actually believe that without taking our little pink pill from our condescending little pink compact and having our babies vacuumed out of us, we can’t be truly free.”