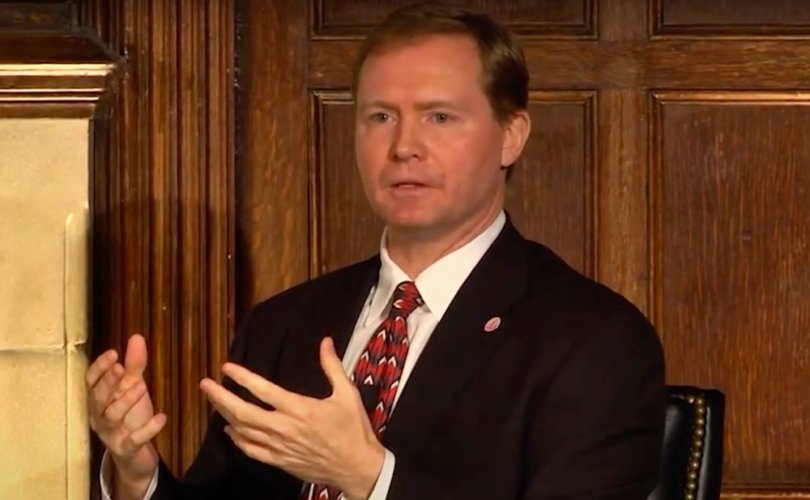 William Steiger, a former Chief of Staff at the US Agency for International Development. Steiger and former Director of the Office of Global Health Affairs at the US Department of Health and Human ServicesGlobal Georgetown / YouTube

March 5, 2021 (LifeSiteNews) – Several previous articles have discussed potential deception in the communication of information on COVID-19 and SARS-CoV-2 vaccines by the U.S. federal government, including entities like the U.S. Department of Health and Human Services (HHS), the CDC, the NIH, and the FDA. A few major statements made at a 2017 symposium on pandemics by multiple senior figures, including Dr. Anthony Fauci, provide additional proof that the U.S. federal government may have ulterior motives for pushing Americans to receive vaccines.

The 2017 symposium was entitled “Pandemic Preparedness in the Next Administration.” It can be viewed on YouTube and is divided into three separate videos – one for on domestic challenges, one for global challenges and one of Fauci’s keynote address. Curiously, rather like the speeches from world leaders at the annual Davos events, these hugely significant speeches have a very low number of views on YouTube.

The symposium continually mentioned the viewpoint that many public health officials now consider pandemics as “national security” concerns (11:00 and 25:08 – domestic challenges video). This cannot be elaborated on but is an important point to be kept in mind.

Additionally worth noting is insistence on globalism throughout the symposium, including by current public health officials. For example, Dr. Hamid Jafari, a World Health Organization official who was at that time the acting Director of the Global Health Protection Division of the CDC (1:20 – global challenges video) as well as former director of the CDC’s Global Immunization Division, said that for the CDC, there is little separation between international and domestic (6:30 global challenges video).

Dr. Jafari also noted that the U.S. CDC, at least at that time, was “working very closely with China” in Africa (39:40-40:20). Dr. Jafari’s statements support a previous article which suggested that the U.S. CDC has the potential to influence COVID-19 data in foreign countries. The statements also indicate that many public health officials at the CDC may have had political reasons to act against former President Trump’s administration due to his opposition to globalism. Dr. Jafari’s statement provides the major detail that China is involved with public health in other foreign countries and may have the ability to influence COVID-19 data as well.

But one of the most significant statements during the symposium was made by William Steiger, the former Chief of Staff at the U.S. Agency for International Development. Steiger is also a former Director of the Office of Global Health Affairs at the U.S. Department of Health and Human Services under President George W. Bush. The HHS oversees the CDC, NIH, and the FDA. In other words, he worked in a U.S. federal government position which provided inside information on the thinking and approach of the U.S. federal government. When discussing pandemic response, he makes a major revelation on the reason why the U.S. federal government, apparently including Dr. Fauci, pushes to vaccinate everybody, or as many people as possible, with the influenza vaccine:

one of the challenges to this infrastructure that we need for this response to a pandemic that nobody has mentioned so far but the flu vaccine industry is a good example of this, is you can’t just build those factories to crank out flu vaccine for the once in 50 year pandemic, as Dr. Fauci will tell you, you have to have something to keep them warm, which is why we push so hard as a government to vaccinate everybody, as many people as we can, every year for the seasonal flu. Because where do you think the seasonal flu vaccine comes from? That’s the same factory in Pennsylvania or North Carolina that’s gonna make the pandemic vaccine when it comes. This is the same sort of situation where we have to convince people that this infrastructure we’re building for pandemic or global health threat preparedness is useful every single day in ways that will get the governments in these countries also to continue to support them. (54:50 global challenges video)

He seemed pretty confident in speaking for Dr. Fauci. In response, Dr. Hamid Jafari of the CDC and WHO stated: “I think, I, you know we completely agree that you know you don’t build capacity in a vacuum, it has to be around today’s public health problems, so that the machinery works (56:00 global challenges video)

— Article continues below Petition —
PETITION: No to government and corporate penalties for refusing COVID-19 vaccine
Show Petition Text
103048 have signed the petition.
Let's get to 125000!
Thank you for signing this petition!
Add your signature:
Show Petition Text

At the same symposium, when discussing developing pandemic medical countermeasure products (which would include vaccines), Dr. Fauci makes a related statement:

if you [apparently referring to public health officials of the U.S. federal government] want a product that is going to be widely used, you have to partner with and embrace the private sector…that is a sine qua non of what we [apparently referring to the U.S. National Institutes of Health] do…We are very industry friendly when you talk about getting a pharmaceutical partner, we try to get it from the beginning. We do something that I refer to as de-risking, namely, pharmaceutical companies that have a reluctance to jump right in in the development because they’re not sure whether this is gonna be a economically viable, uh, product, they tend to hold back, but if you do the basic research, the early clinical studies and bring up the process closer and closer to the endgame, they are much more enthusiastic about coming in. And we do a lot of that. (39:30-41:30 Fauci’s keynote address)

Dr. Fauci’s statement that the U.S. federal government may want to develop a product “that is going to be widely used” and “economically viable” appear to agree with the previous quote by Mr. Steiger. Both statements may impact how one interprets U.S. government communications on vaccines.

The above discussion should also provide the reasonable person with a significant basis to question the honesty of U.S. federal government public health officials regarding COVID-19 data, including COVID-19 death counts.