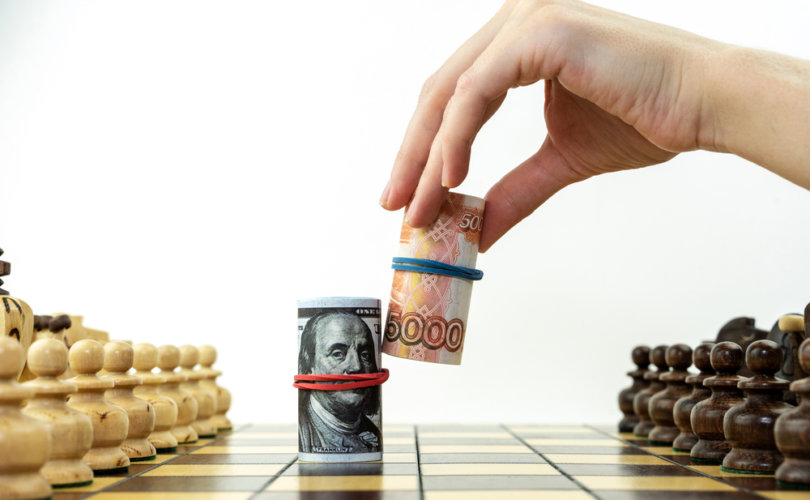 US dollar and Russian rubleUltraskrip/Shutterstock

(LifeSiteNews) – Russia’s invasion of Ukraine has triggered significant repercussions in the global financial system, the consequences of which are yet to be fully understood. It has also led to many silly predictions.

It is not surprising that there are misunderstandings about how the global financial system works. It has become so complex no-one fully understands it, including those who profit from it. Four decades of “financial de-regulation” – a nonsense because finance consists of rules and rules cannot be deregulated – has created a system that has become a kind of meta-casino based on high level mathematics and computer trades conducted in microseconds.

The blame for the current financial unpredictability is often laid at the feet of so called “fiat money”: money created by government dictate. But the opposite is true. There has been a lack of government fiat. Regulators long ago handed power over to private actors and they now make up their own rules.

It is thus hard to anticipate what will happen next, but there are certain things that will not occur. Here are four myths about the financial attack on Russia.

Myth 1. Governments are in charge of the global financial system and so can weaponize it

Governments have long since vacated the playing field to the private players. They can impose sanctions, and to a limited extent remove Russia from the banking system, but they cannot direct how the markets respond. Already, many of the big players are positioning to buy distressed Russian assets. In the global financial system money moves at lightning speed, circumventing whatever governments attempt to do.

Myth 2. The West will punish Russia for its transgressions

If anything, the opposite is more likely. Russia has already suffered from years of sanctions and has become relatively self sufficient. It has a trade surplus, which is likely to get bigger as oil and gas prices soar. Half of the nation’s exports are mineral fuels and precious stones, and markets will be found for both. Even if European sanctions close off some markets, it will be easy to sell to other countries, especially China. The main Russian imports can also be easily sourced from China, Russia’s biggest trade partner: cars, packaged medications, vehicle part, broadcasting equipment.

The West is more vulnerable. Germany, the most exposed European country, sources about 40 per cent of its energy from Russia. Western economies are also burdened by unsustainable debt, the reason why interest rates are so low. It is likely that sanctioning will lead to even higher levels of inflation, which will put pressure on central banks to raise interest rates. With the global economy mired in debt, the consequences of higher interest rates will be dire.

There are dangerous signs of an increase in inflation. The oil price is at a 13-year high and wheat prices are at a 14-year high, in part because the biggest suppliers of fertilizer are Russia and Belarus. Nickel prices have doubled. Then there is the effect on global supply chains, described as “the most dramatic and unpredictable supply chain map since World War II,” that can result in a “bifurcating global economy.” This could be the end of the modern era of globalisation, in other words.

Myth 3. The attack on Russia’s central bank and the use of the SWIFT system will cripple the nation’s ability to conduct domestic and international financial transactions

The ban on SWIFT (Society for Worldwide Interbank Financial Telecommunication), which is the main method for making cross border financial transactions, is something that Russia has prepared for. As JP Morgan’s chief executive, Jamie Dimon has warned, SWIFT is just a messaging system, and it will be possible to do business with Russian entities in other ways. China has also created its Cross-border Interbank Payment System (CIPS), which Russia can use as a substitute. Russia is also reportedly increasingly asking to be paid for its oil and gas in gold.

The attempt to freeze the assets of Russia’s central bank is more serious, and could be described as an act of financial war. According to Statista, about 14 per cent of Russia’s reserves, held in gold and foreign currency, is located in China. The biggest share of reserves, 21.7 per cent is held inside Russia in the form of gold, affording the central bank control of just over one third of its $630 billion in foreign exchange reserves.

Again, though, Russia’s vulnerability is limited. Foreign exchange reserves are mainly used to protect the national currency. Currency collapse can be a massive problem if a nation’s debt is denominated in a foreign currency – especially the US dollar, as a string of developing countries have found to their cost over the last 50 years. But Russia has relatively low national debt and it is all denominated in rubles. Nobbling the central bank will create difficulties but it will not bankrupt the Russian state.

Myth 4. The role of the US dollar as the world’s reserve currency is under threat as Russia starts to deal more with China

Thirdly, the ruble is only a small player in the foreign exchange markets. It ranks seventeenth in the world, according to the BIS, accounting for only 0.6 per cent of turnover. That is half the level of the New Zealand dollar.

The attack on Russia’s financial system is serious and will certainly cause difficulties. But the Russian leadership has had a long time to plan for what is happening and none of it will come as a surprise. The biggest surprises are more likely to come for the other side – those waging this financial war.