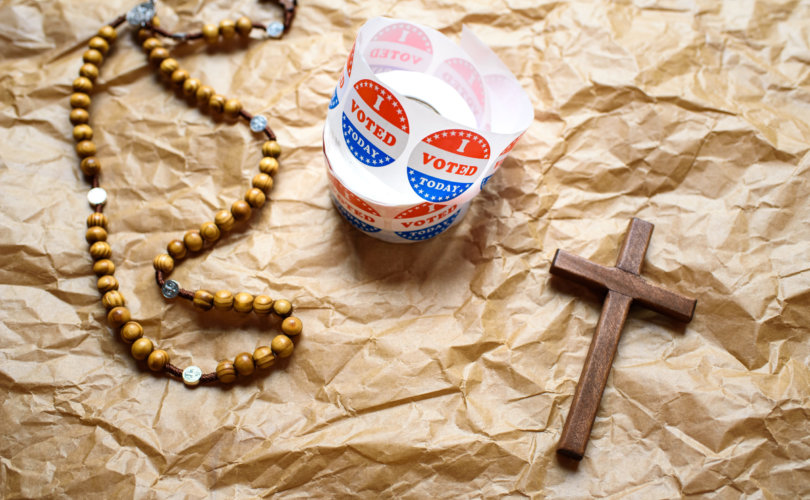 October 23, 2020 (WorldNetDaily) – Every American who doesn't want to see our beloved nation transformed into a godless, socialist, “workers' paradise” must vote to stop the threat of the systemic Marxism that has infected our society through the efforts of today's Democratic Party. Sadly, about 40 million Christians don't take this threat seriously enough to even vote (15 million Christians not registered; the total of non-voting adults, registered and not registered, was 102.7 million in 2016, or 44.4 percent of the 231.5 million eligible voters).

Those non-voting Christians are a huge percentage (44 percent) of the 90 million eligible Christians (all denominations). How is it possible that so many who aspire to Christian moral responsibility are so cavalier about such a consequential civic responsibility, one that has such grave moral significance? To comprehend this threat, please read the evidence at every link and compare the differences between party platforms on these subjects: abortion, marriage, free expression of religion, limited government and preserving America's Christian heritage.

Who should better understand the urgency of this existential threat, with its eternal consequences, than liberty-loving Christians who see the true nature of what the Democratic Party advocates as anti-family, anti-Christian culture, increasingly anti-American and anti-God (the party's policies, not individual Democrats), and anti-civilization (pro-abortion, and tacitly approving rioting/looting/burning, often fomenting police-hatred, advocating abolishing/defunding police, etc.)? The Democratic Party is promoting Marxism.

If the threat of the Democratic Party's systemically Marxist policies/practices and promises doesn't motivate those non-voting Christians by itself, perhaps they will be persuaded by understanding the dire consequences of supporting that danger within the context of both of Jesus' pledge, first, to bless those who acknowledge him publicly (in this regard, politically) and, second, to condemn those who publicly deny him:

The Democratic Party, which actually booed God at its 2012 convention, will certainly deny Jesus “before men” if its candidates control the government.

People who boo God deny that the founders actually dedicated the nation to Jesus Christ by officially, perpetually and gratefully “acknowledg(ing) (him) before men” (“before a candid world” in the Declaration of Independence) when they referenced him four times in the document, one being an undisguised prayer (see below). That acknowledgment obligated Jesus to acknowledge our nation “before (his) Father”, thus, explaining America's massive blessings.

The founders acknowledged Jesus as:

This work is derived from my ebook, “America's Primal Prayer: Is Jesus Christ the God of the Declaration; Did the Founders Dedicate the Nation to Him; is the Constitution Woven From Christian Fabric; and Why it Matters.” That ebook explains that we are “one nation under (and blessed by that) God” because America officially and perpetually acknowledges Jesus Christ “before men” in many ways, but specifically in the Declaration of Independence.

The reference to the “Supreme Judge of the world” in the concluding paragraph of the Declaration is a clear reference to Jesus Christ inserted into Jefferson's draft as an undisguised prayer by the Christians in Congress, the Declaration's actual author (because diests deny that God judges, they don't pray). That prayer to Jesus Christ clarifies Jefferson's less specific references to “Nature's God” and “Creator” (in the first and second sentences) and to Congress' prayer for “the protection of divine Providence” (in the Declaration's last sentence), with an explicit identification that Jesus Christ is the God to whom the nation perpetually prays for righteousness using his well-known biblical title:

” appealing (praying) to the Supreme Judge of the world for the rectitude (righteousness) of our intentions. …” (Emphasis on Jesus' title, bracketed comments added.)

While the phrase, “one nation under God,” wasn't added to the Pledge of Allegiance until 1954, it's an explicit reference to the historical fact of the Declaration's Christ-based “Chain of Delegated Authority” (God>man>servants in limited government), and of that Chain's manifestation in the symbiotically-linked Constitution as the unamendable “Liberty Equation” inherent in the American form of government — that our rights are a gift from God — which has a 240 year history of not being the theocracy the secular (godless) left falsely alleges.

Such an understanding desperately needs the political support of those non-voting, and Democratic voting, Christians. Voting would be an important way for them (and you?) to “acknowledge (Jesus) before men”” and, thus, revitalize the founders' official and perpetual acknowledgment of Jesus “before men” while also claiming Jesus' promise for themselves by politically opposing the Democratic Party's attack on the God-acknowledging American Theory of Government.

Each person must decide and vote accordingly after reviewing this information.

America needs a revival of Christian patriotism by those who vote and who know the 40 million Christians who don't vote (or the millions of Christians who vote Democratic) to motivate them to do their civic and Christian moral duty to vote and restore America's historical acknowledgment of Jesus “before men” (“before a candid world”) and, thus, preserve his blessings on America, and save the nation from the godless, America-hating Marxism systemically infecting “before a candid world” today's Democratic Party.

This knowledge will be decisive in the 2020 election, and beyond, if those reading this pass it on to their pastors, fellow parishioners/congregants and family/friends, as well as to as many media personalities as possible.

— Article continues below Petition —
PETITION: Dump Twitter and Big Tech for threatening our democracy and freedom of speech!
Show Petition Text
15589 have signed the petition.
Let's get to 17500!
Thank you for signing this petition!
Add your signature:
Show Petition Text

This article was initially published on WorldNetDaily and is republished by LifeSiteNews with permission of the author.

Michael Nedderman is a California-based writer and author of the ebook, “America's Primal Prayer,” who loves history, photography, martial arts, prospecting for gold, writing letters to the editor and exploring the meaning of life. He can be reached at [email protected]