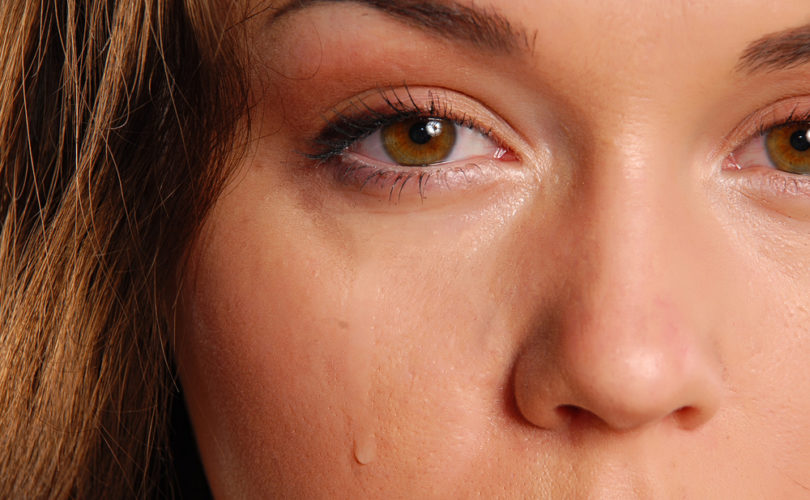 April 5, 2019 (Catholic Stand) — In 1972 Helen Reddy hit the song charts singing, “I am Woman, Hear me Roar.” In her deep-throated nasal she belted out lyrics such as “… Yes, I am wise. But it's wisdom born of pain. Yes, I've paid the price. But look how much I've gained … I can do anything”. Was she right? Or have we actually lost so much and in all reality lost our voice?

The women's liberation movement in the '70s may have started with a roar, but 50 years later the roar sounds more like a whine along with many a whimper. A multitude of voices born from the pain of abortion has been silenced. Abortion, which was sold to the populace as something to free women from the consequences of supposed free sex and allow them to soar, to do anything, has brought them to an incredible low. The abortion mentality has managed to stifle the scream in the aching heart and we are all stunted by the grief. Well if you don't mind…I'd like to vent.

Pushed Into an Abortion

Nearly 40 years ago, ashamed of the sin of engaging in sex outside of marriage, I allowed myself to be pushed into my first abortion. Fear of being found out and fear of abandonment convinced my naive mind to do what my heart believed to be so terribly wrong. I surely didn't want an abortion and I cried out to God to save me and my baby. Fear, however, won over and I numbly entered the abortion facility where I signed over the right to kill my child. I wasn't offered any other choices and was convinced that the lip service from the father and the abortion workers (I wasn't carrying a baby, just a clump of cells) was true. Before I signed on the dotted line an in-take 'councilor' asked me if this is what I really wanted. I told her 'No, but I don't have a choice.” She just looked at me. She said nothing; offered no options. I left that building empty and numb. I felt the death of my soul along with that innocent child.

In the aftermath, I had a bit of a voice. I wept, but the grieving process I needed so badly was stifled by a world which said I had the right to do what I did and a man who told me to get over it. It was, he said, “My decision”. The man who insisted I have the abortion refused any responsibility and quickly silenced my voice. I learned to bury my feelings as it appeared to me no one wanted my grief.

In less than a year I was pregnant again. I didn't even fight this time; there was no argument. Like I said before, completely numb. At the facility, the abortionist examined me and said, “I can't do it. You're too far along.” “What?” I asked. Very quickly checking himself he stated, “Oh no, it's just a big baby.” No one up to this point had ever acknowledged that that clump of cells was indeed a baby. As he began the procedure the scales began to fall from my eyes and I knew this had to stop. Yes, I did have a baby, and no, I did not want an abortion. Crying, I told him to stop. I must have been loud as he told me to shut up; that it was too late. He instructed the assistant to hold me down and keep me quiet. Again…silencing my voice. My child's silent scream along with mine.

It was 10 years before I could find my voice, ten years of suffering silently. The world refused to acknowledge my pain and the few people around me who knew told me to 'just get over it…you had the right.” The fear of being rejected by the very people who would later be a conduit of great forgiveness and mercy kept me silent. Even way back then, long before my conversion to the Catholic Church, I desired to talk to a priest. However, I knew he wouldn't be able to absolve me and I couldn't face the rejection.

Years of counselling, a merciful man who would be my husband, and quietly telling my story to a few loving souls allowed my wounded heart to begin the healing process. Slowly I began to find my voice which had been so stifled from the liberal mentality in society. Thinking I had received all the healing possible this side of Heaven, my husband and I found ourselves being drawn to the Catholic Church. Nearly running to my first confession, the absolution conferred on me was a great balm. Now, I thought, I am healed. However, every year since I have learned to expect even greater, more profound healing. It's never easy, but I have now begun to look forward to it. I am no longer defined by abortion but instead defined by God's loving mercy. God is so good.

The proof of God's grace and mercy for me is the fact I have found my voice. It began as a tremble as I would share my experience with one sweet soul at a time. Now, however, I am able to stand in front of hundreds of souls and tell them I am a post-abortive woman, but again, defined by God's abundant grace. I am healed and continue to be healed. I know when I talk I am speaking to some dear soul who has been suffering silently with a scream inside just bursting to come out. There is a great desire within me to be one who would speak merciful words to them, allowing them to finally give voice to their pain.

Sadly, there are millions of us according to the US Abortion Clock. Can you imagine the voice we women could have in the pro-life movement if we could reach inside of ourselves and let it loose? Helen Reddy's song and the liberation mentality were and are grievously mistaken. They have insisted that women can do absolutely anything…anything but have a child. According to them, if you're pregnant, you are weak. You can't possibly rise above your situation. Insisting upon this, they silence women and shame them. Just how many abortion facilities offer help through all nine months of pregnancy, assistance for up to two years after the child is born, and assistance with counseling and schooling? Not one. How many offer counseling for the post-abortive or financial/medical assistance when her body has been damaged from abortion? None. And yet, alternately there are over 4,000 pro-life women's centers who do give these life-saving measures.

If you or someone you know had an abortion, be a shoulder to cry on. Remember, we don't want excuses. We need to confess and receive mercy. Assist them in finding their voice. Now is the time. With so many states pushing through horrific laws to kill children through all 9 months and infanticide, we need to find our voices. I realize this takes time but the more we speak, the more healed and emboldened we become. Together, and along with those who have survived abortion, we can roar. The world will see that we are “numbers too big to ignore.” Finally my voice, your voice will be heard. Finally, we can give a voice to our children who have died. Finally, the world will see their dignity. Finally, we may be a people, a nation of life. Let us join our voices. Let us ROAR!

Published with permission from Catholic Stand.