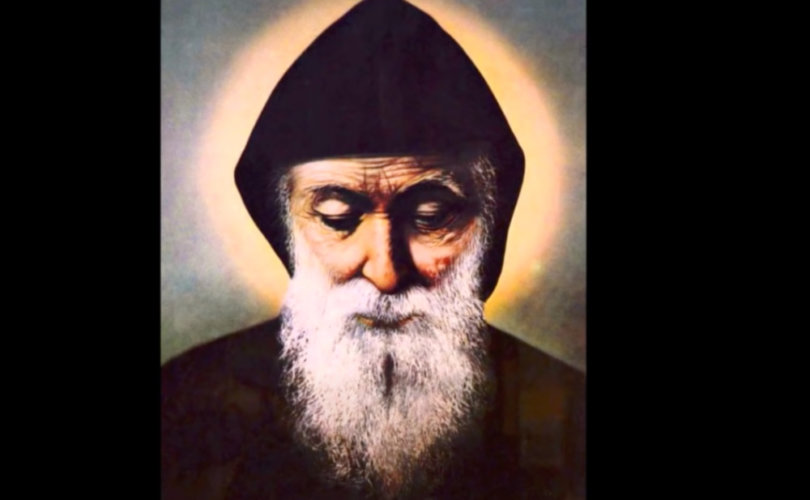 (LifeSiteNews) — On Sunday, we celebrate the feast day of an amazing saint whom you may have never even heard of — a saint sometimes known as “the saint inebriated with God.”

I first encountered St. Charbel Makhlouf about six years ago when I was searching for a saint to intercede on my behalf. I don’t even know how it happened, but I came across his story and a prayer to him. The more I read and the more I prayed, the stronger the connection became. Not too long after, my son came home from school with two prayer cards—and one was St. Charbel. To me, this was affirmation that this holy saint was listening.

Since then, I have felt a closeness to St. Charbel that I’ve only felt with a few others, including St. Francis of Assisi. My devotion to St. Charbel has grown, and I feel at peace when having conversations with him.

So in honor of his feast day, I want to share the life of this remarkable saint with you in the hopes that his life will not only inspire you to become closer to God but that it will inspire you to emulate his actions as you work toward helping others strengthen their faith as well.

St. Charbel was a mid-19th century Maronite Catholic monk, priest, and hermit who lived a humble but astonishing life. Some would say that because Charbel lived the life of a hermit, he didn’t do anything amazing. He didn’t rove from town-to-town preaching. He didn’t move to faraway lands to minister to people in a leper colony. He didn’t start schools. And he didn’t give his life for his faith.

But Charbel did do something amazing. He gave his life TO his faith. And in doing so, he inspired others. The simple joy, the love, the piety, and the devotion he had for God and Mary were the reasons people knew of him. In fact, people would travel from all over to see him because he had the ability to perform miracles. His superior knew this, and he would often ask him to go to the surrounding towns to heal the sick. It is said that, not only did Charbel heal people from physical ailments, but he healed them from spiritual ailments as well, even casting out demons. This ability to heal people led him to be known as the “wonder worker.”

Charbel was born Youssef Antoun Makhlouf on May 8, 1828, to a poor family in a tiny mountain village in Lebanon. His father died when Youssef was just a young boy, and his mother took care of the children the best that she could. She was a very devout woman who fasted regularly and said the Rosary daily. Her example helped lay the groundwork for the intense prayer life and closeness to both God and Mary that Youssef would eventually find.

Youssef was in charge of taking care of the family’s small herd of cows, and every day when he would take them to graze in the field, he would go to a nearby grotto dedicated to Mary to pray. The people in his village knew this and began calling him “the saint.”

Even as a young boy, Youssef felt a powerful devotion to God and Mary. He understood the importance of revering Mary as the Mother of God and of seeking her intercession. When Youssef grew up and began living as a hermit, he never felt lonely, for he had God, the Eucharist, and Mary to fill his heart and his days.

Though his mother wanted him to marry, Youssef had a deep desire to serve God. When he was 23, he left his village and entered the monastery. He changed his name to Charbel and in 1859 was ordained a priest in the Maronite order.

For the next 16 years, Charbel worked in the monastery, prayed, and sacrificed. But what he really desired was to live as a hermit at the hermitage of Saints Peter and Paul, which was near the monastery. He longed to fill his days with prayer and sacrifice. His superiors allowed this, and Charbel moved to the hermitage in 1875.

Knowing Christ in the Eucharist

​​​Charbel would spend hours kneeling in front of Christ in the Eucharist and praying that the world would return to God. He made the Eucharist the center of his life.

In 1898, Charbel suffered a stroke while saying Mass, and as he fell to the ground, he held tightly to the Eucharist so as not to allow Christ to fall to the floor. A little over a week later, Charbel died.

The miracles that Charbel was able to perform while on earth did not stop with his death. Even on the night of his death, it was reported that a bright light emanated from his tomb. It continued to do so, and his superior sought permission to open the tomb.

He eventually got permission to open Charbel’s tomb in April of 1899. When they opened it, they found Charbel’s body to be incorrupt. In addition, it was exuding a “blood-like moisture” — something it would continue to do for nearly 70 years.

His tomb was opened eight times between 1950 and 1975, and each time it was examined by doctors and representatives of the Church. His body continued to be incorrupt.

After the first opening in 1899, the superior had Charbel’s body transferred to a different coffin and moved it into the monastery. When people found out, they began to visit and ask for Charbel’s intercession.

Today, it is estimated that about 4.5 million people visit Charbel’s tomb each year. According to a nonprofit organization dedicated to educating about St. Charbel: “More than 33,000 healing miracles have been reported to date in the records of the Monastery of Saint Maron-Annaya. In addition, there are countless thousands of miracles reported in Lebanon and abroad that do not appear in these records.”

Charbel’s life gives witness to the fact that pillars of the faith come in all forms. It’s no wonder that this saint who was “inebriated with God” has affected so many people. The lights that shone from his tomb give credence to the holy life he led and remind us just how important it is to be the light of Christ to others.

So, as we contemplate this humble, devout saint, let us ask for his intercession in our lives. Let us allow the light he shined forth while he was alive to shine forth from us, to strengthen our prayer lives, and to bring the people in our lives closer to Christ.