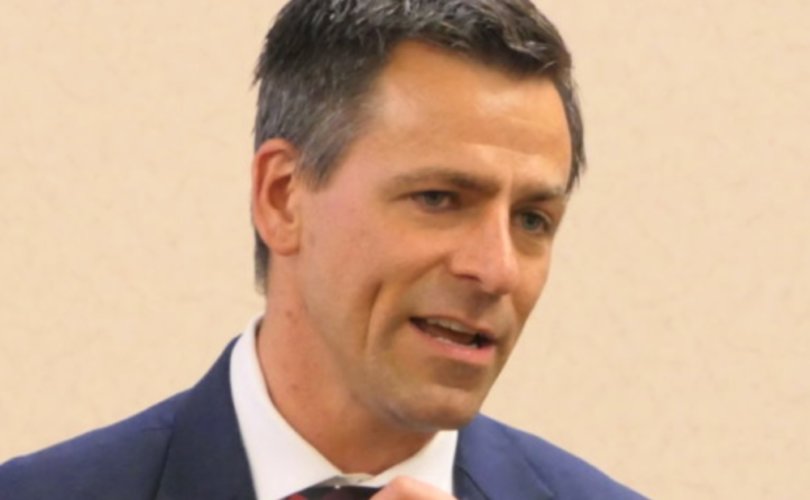 (LifeSiteNews) – With the August 2nd Republican primary fast approaching, the conspicuous silence of former President Donald Trump looms over the decision of who will be given the opportunity to challenge Democrat Gretchen Whitmer for the Michigan governorship.

A recent poll found 63% of still-undecided likely Michigan Republican voters say Trump’s endorsement would be important to their final decision, prompting Lansing-based pollster Richard Czuba to call it “Donald Trump’s race to win or lose if he chooses to do so.”

At the moment, rumor has it the former president was close to endorsing businesswoman and America’s Voice News commentator Tudor Dixon. However, discovery of her ties to NeverTrump Republicans in the state, as well as alleged polling suppression used to falsely boost Dixon’s inevitability, have purportedly left him distrustful of the endorsement advice he was getting from allies of his former Education Secretary, Betsy DeVos, who hails from Michigan.

Many conservative Republicans are emphasizing that the clear choice for Trump’s endorsement is grassroots MAGA conservative Ryan Kelley. Here are 5 reasons why many activists say Trump should endorse him for governor.

A successful small business owner who has served on the Allendale Township Planning Commission, Kelley is said to not only sound good on the issues; he fights for his convictions…with the people he’s fighting for.

He is a gun-owning Catholic father of six. He has led, organized, and participated in rallies and protests against the very things conservatives generally (and Trump’s base specifically) are most concerned about: COVID mandates and lockdowns, the destruction of civil war monuments, the Second Amendment, religious liberty, and more. He’s also the co-founder of the American Patriot Council, which mobilizes citizens in support of their constitutional rights and American values.

It’s one thing for politicians to tout the right causes on a stage or in a press release, as his primary opponents have done in certain cases. Kelley is also known to stand shoulder to shoulder with activists on the ground, taking the same slings and arrows the rest take every day for our values right out of the gate.

He’s defended his presence in Washington DC on January 6

While several other candidates in the race are trying to claim the MAGA mantle for themselves, Kelley is said to be the only one to have paid a real, personal price for his loyalty to the former president. He attended the January 6, 2021 protest at the U.S. Capitol to urge Congress not to certify Joe Biden’s victory, and this June, the FBI arrested him for it.

As Kelley told the media in recent weeks, the left is going after him the most because they know just how much of a threat he actually is. Tudor Dixon, on the other hand – who is endorsed by the woke Michigan Chamber of Commerce – is not the target of their ire, which tells you she’d be just another establishment puppet.

Unlike so many politicians today, Kelley hasn’t turned on Trump by pushing the discredited “incitement to insurrection” narrative to save his own skin. Instead, he remains as defiant as ever about the partisan nature of the arrest, and clear on the danger it spells for conservatives everywhere.

“There is no coincidence in the timing of this,” Kelley told Tucker Carlson last month. “It’s right in alignment with all this political theater that the Democrats are pushing with their J-6 committee, and there’s no coincidence here.”

Earlier this month, Kelley told LifeSite’s own John-Henry Westen that despite the threat of Biden “weaponiz[ing] the FBI” to “silence conservatives,” he remains hopeful: “I’m on God’s side. I have a strong message and I’m not scared, and I speak it clearly, strong conservative values, and it’s attracting people to our message.”

Loyalty is all too rare in politics, especially in the face of federal prosecution.

He knows election integrity and our republic are at stake

More than just a decision about who would be the best replacement for Whitmer, this race, which has national consequences, is shaping up to be a referendum on whether the unanswered questions about the 2020 presidential election will be swept under the rug.

This election season, an alliance of major GOP donors and leaders, including the family of the aforementioned Secretary DeVos (who turned her back on Trump after January 6), has pooled their resources toward the goal of supporting Republican candidates who fit their ideas of “good government,” which in practice appears to mean reasserting the party’s pre-Trump business as usual against the influence of fresh MAGA-aligned voices.

Kevin Rathburn, a Trump-endorsed state House candidate for Michigan’s 85th District, says that the DeVos-backed Michigan Freedom Fund explicitly told him they would endorse him only if he agreed to “refrain from talking about VOTER FRAUD and rely solely on the establishment talking points. I REFUSED, politely and they hung up.”

The Michigan Republican establishment appears to be trying to ensure that those who rigged the 2020 presidential election get away with it. Proof of that is evident in their strong opposition to having Matt DePerno as the attorney general candidate.

It is being hoped that a Kelley-led Republican ticket would serve as a powerful, America First alternative to the current Soros-owned Michigan leadership trio of Gretchen Whitmer, Dana Nessel, and Jocelyn Benson, Michigan’s Governor, Attorney General, and Secretary of State, respectively. Conservative Republicans say that Dixon would offer voters hardly half the contrast that Kelley does.

Ryan Kelley is said to be the real pro-life, pro-family candidate

Almost every pro-life activist I’ve spoken to in recent weeks is furious over Michigan Right to Life endorsing Tudor Dixon. I’ve yet to get the full scoop on what really happened, but the vast majority of the grassroots think this was a corrupt bargain meant to hurt Kelley right when polls were showing he was emerging as the frontrunner.

Kelley has stood with life consistently throughout the campaign. He’s not just a family man opposed to transgenderism, he’s been a loud and clear voice for parental rights and the unborn since announcing his candidacy (and even before). A Trump endorsement is expected by Kelley’s supporters to show that the former president is able to see through the lies establishment RINO’s in the state are sowing to try and trick him into supporting the moderate candidate Dixon.

There are strong reasons to doubt Dixon is even close to being the inevitable choice of Michigan Republicans.

“The rumors in Lansing are that the Detroit News is purposefully suppressing and sitting on their own polling showing that Dixon is in last place in the Governor’s race,” the Gateway Pundit blog reports.

The poll reportedly shows that Kelley is actually in the lead.

Another poll, commissioned by businessman and GOP primary contender Kevin Rinke, puts Dixon and Kelley neck-and-neck at 17% and 15%, respectively, with Rinke only a few points higher at 19%.

On July 18, the Detroit News finally released another poll with very different results from the establishment narrative: Dixon at 19%, Rinke at 15%, Kelley at 13%, and chiropractor Garrett Soldano at 12% – and with a 4.4% margin of error, everyone is well within range of everyone else. Calling the race a “complete toss-up,” pollster Czuba said that the primary “is treading water waiting for Donald Trump to decide if he’s going to dive in or not.”

One thing these polls agree on is that almost 40% of Michigan Republicans still haven’t decided who to support, which isn’t surprising considering all the dirty tricks that are claimed to be polluting the race. Kelley supporters emphasize that President Trump could do a world of good by cutting through all the noise and nonsense with an endorsement…and that he’d be hard pressed to find a truer conservative warrior to endorse than Ryan Kelley.