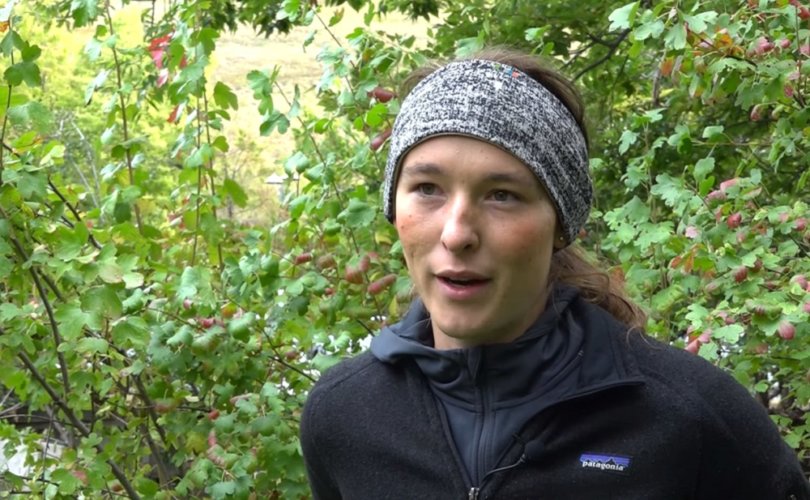 Athlete Jonathan Eastwood, who now considers himself a girl and goes by 'June.'UM News / YouTube

October 29, 2019 (Family Research Council) — For some college students, it's a parody that hits way too close to home. When the Babylon Bee ran a satirical news story about a motorcyclist identifying as a bicyclist to set a new record, a group of runners at the Big Sky Conference understood all too well. In their conference, boys don't just compete as girls — they get honored for it!

Two years ago, Jonathan Eastwood “dominated” the men's competition. In 2019, he's dominating something else: the women's field. Jonathan, who now goes by “June,” “finished second in a field of 204 runners at the Santa Clara Bronco Invitational” and “helped the University of Montana finish seventh as a team.” For that, school officials decided, he's been named the “Women's Cross-Country Athlete of the Week,” edging out eight other actual females for the title.

“Not surprisingly,” Bill Zwerger noticed, the six-foot, five inch male “fared quite well against his weaker and slower female competitors this season, finishing first at the U of Montana's Invitational and second (by one second!) at the most recent Bronco Invitational. But that's only to be expected, seeing that he was a top runner … for the U of M Grizzlie's men X-C and track and field teams as recently as 2017. I have the sneaking suspicion that his latest second-place finish was due to him 'letting off the gas' toward the end of the race, seeking to minimize the negative publicity his winning yet again would have garnered, along with the outrage his female opponents must feel in having a male win every race against them.”

When the College Fix contacted the university, they asked why the school didn't disclose the fact that June identifies as a transgender. Spokesman Joel Carlson insisted there “was no subtext.” Good luck convincing the rest of the sport, which is struggling to survive this fatal infusion of political correctness. Even now, the NCAA has no answers for girls' track, admitting, “The NCAA does not have a maximum testosterone level for its current policy. The current policy is being reviewed by our membership.”

In the meantime, women's high school and college programs are desperately trying to cope as girls lose more races, team eligibility, and scholarships to biological men. Girls like Selena Soule have been adamant that they just want a fair shot. But that's virtually impossible now, she says, in an unlevel playing field. In her complaint to the Department of Education, she argues that women's sports can't compete in an age when biological men can line up and take her trophies. In Connecticut, where she competes, the reality is particularly harsh. The competition board allows boys to race against girls, even without undergoing any sort of hormone therapy.

Olympians like Sharron Davies are furious that the standards are so low now that men can compete against women “no surgery required … no hormones … no medical diagnosis … just self-ID and reduced testosterone to a level [still] x5 the highest average (98 percent) of [real] females.” It's “madness!” she argues. The whole reason we have men and women's sports, she points out, is “because we are biologically different. Performance 100 percent confirms that. The reason steroids (including testosterone) are on the banned list is because using them give[s] you an advantage.”

And yet, the extinction of women's sports — and the uniqueness of women in general — is exactly what the Democratic Party is championing. Under the radical Equality Act passed by the House, every school would be forced to accept men like June into girls' athletics. It's a policy so near and dear to the 2020 candidates that Joe Biden promised that if he was elected, “[the Equality Act] will be the first thing I ask to be done.”

If there is a silver lining to this politically correct lunacy, it's that more people are starting to see the quandary that's created by policies and decision that aren't based in anatomical realities but emotional whims. If biological sex doesn't matter in sports, where does it matter? Good question. One that most liberals can't seem to answer. Members from both sides of the aisle — especially those who claim to be pro-woman and pro-children — need to stop this devastating legislation. The future of women's rights, privacy, protection and athletic potential depends on it.