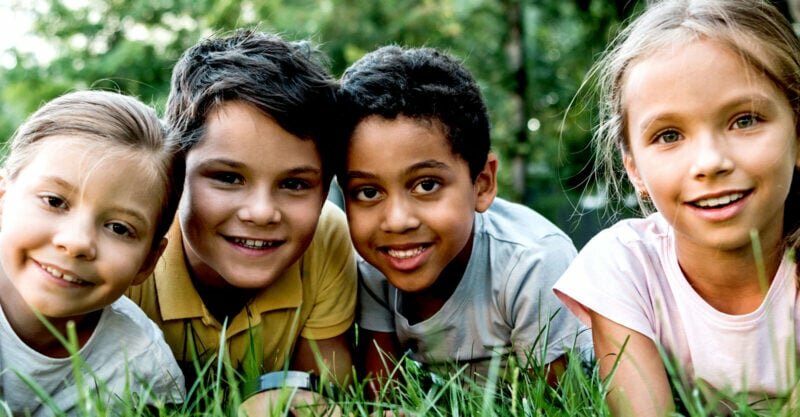 (Children’s Health Defense) — Since 2020, parents have had to contend with increasingly brazen efforts by governments, schools, foundations, Big Tech, Big Pharma and others to hijack, injure or destroy children’s minds and bodies.

Far from being piecemeal or merely opportunistic responses to a convenient “pandemic,” these assaults on children — and adults, too — reflect a well-financed, long-term control agenda aimed at implementation of digital identities, social scoring and “full monitoring and tracking of every human being through… mechanisms already in place.”

At the “Defeat the Mandates” rally in January 2022, Children’s Health Defense Chairman and Chief Litigation Counsel Robert F. Kennedy, Jr., asserted, “Nobody in the history of the planet has ever complied their way out of totalitarian control” and reminded the public, “Every time you comply, you get weaker.”

As if in confirmation, infants, kindergartners and college students were badgered throughout the year to get — and then suffered atrocious damage from — COVID-19 shots, despite overwhelming evidence that the jabs urgently needed to be withdrawn from the market.

Clued in to these and other dangers crowding around their children, a growing number of parents recognized the need for noncompliance.

Keeping noncompliance as the watchword for 2023, here are some actions that could make a real difference in the coming year.

READ: Debunking the myths of homeschooling: The joys of learning with family

As Anna L. Noble put it in an April 2022 article in The Defender, “Schools provide a useful testing ground to experiment with ways to hold the attention of children, develop nudges, and elicit desirable behavioral responses.”

Scathing education whistleblower Charlotte Thomson Iserbyt, a now-deceased former senior policy advisor for the U.S. Department of Education, decried the “deliberate dumbing down of America” and traced the education system’s shift “from academics to behavioral modification” back to at least 1965.

Even private schools, under the thumb of the agenda-driven National Association of Independent Schools, appear to have lost any vestiges of “independence,” with enrollment contracts reportedly prohibiting parents “from ‘[voicing] strong disagreement’ with school policy or curricula, under threat of expulsion.”

Instead of continuing to expect something different from an “abusive” educational system, Lynn suggests that home schooling can be a powerful form of noncompliance.

Many parents apparently agree — responding to schools’ disastrous imposition of measures like remote learning and masking in 2020, a record number of households turned to home schooling.

Home schooling is now the fastest-growing form of education in the U.S.

Earlier this month, more than a third of parents surveyed (35%) — up from less than one-fourth (23%) in 2019 — questioned school vaccine mandates,

And this was only the latest in a string of reports addressing rising parental ambivalence about “routine” childhood vaccines.

READ: COVID vaccines for kids are unnecessary – and may kill them

These trends suggest that a critical mass of parents is coming to see vaccines as a “con man trick,” understanding that promises of vaccine safety were false and conflict-of-interest-riddled well before COVID-19 shots came along — and in fact, since the very inception of childhood vaccination programs.

The world’s vaccine experts conceded this point in a roundabout manner at a World Health Organization Global Vaccine Safety Summit in late 2019, as did Danish researcher and long-time vaccine insider Christine Stabell Benn at around the same time.

Benn commented, “Vaccination opponents are justified in being concerned [about safety],” adding:

No vaccines have been studied for their non-specific effects on overall health, and before we have examined these, we cannot actually determine that the vaccines are safe.

Benn’s colleague Peter Aaby admitted, also in 2019, “Most of you think that we know what all our vaccines are doing; we don’t.”

In mid-2021, Benn and Aaby cautiously argued against COVID-19 shots for children in the high-status BMJ scientific journal.

Given the shocking odds of vaccine injury that already prevailed prior to COVID-19 — conservatively estimated in a 2010 government-commissioned report at one in every 39 vaccines administered — it is not surprising that the carnage from COVID-19 jabs would now be swelling the ranks of questioners and “ex-vaxxers.”

However, vaccination — even with its payload of known and undisclosed toxic ingredients and apparent batch-to-batch variability — is far from the only vehicle for poisoning our most vulnerable.

Parents willing to do their own research and forge their family’s own nutritional and healthcare path will find that it may be within their reach to lessen, if not entirely eliminate, their children’s exposure to other common poisons such as food additives, glyphosate, organochlorine and organophosphate pesticides and over-the-counter drugs like acetaminophen, all of which come with vastly underreported dangers.

In 2006, author Richard Louv coined the term “nature-deficit disorder” in the subtitle to his book “Last Child in the Woods,” suggesting that today’s “wired generation,” with parents’ conscious or unconscious permission, has unwisely prioritized screens over time in nature.

READ: Study: Too much screen time linked to psychological difficulties, even for physically active kids

With the worsening of children’s screen habits over the past several years, the nature deficit has become a “hot topic.”

The related problem of screen or social media addiction — linked not just to sleeplessness but to eating disorders and outcomes like suicide — has become the focus of lawsuits alleging that social media companies “aggressively” deploy algorithms designed to addict children and adolescents.

Discovering the major role that “social influencers” seem to play in the exploding phenomenon of “rapid onset gender dysphoria” among girls, author Abigail Shrier’s top recommendation in her book, “Irreversible Damage: The Transgender Craze Seducing Our Daughters,” is to not give one’s daughter a smartphone.

As “Financial Rebellion” and the Solari Report’s Catherine Austin Fitts explains, “Children are targets of some of the most powerful people and dangerous technology on the planet,” and it is parents’ job to “understand this and protect them.”

Teach kids to use cash, not plastic

In late 2020, Bank for International Settlements General Manager Augustín Carstens shared central bankers’ unfriendly vision of a monetary system enabling complete control of all transactions through central bank digital currencies (CBDCs) which, ominously, would also allow central banks to turn people’s money on and off at will.

Unfortunately, the younger generations are marching heedlessly toward this dystopian vision, with millennials, according to 2021 research by Capital One, “increasingly moving away from cash spending” in favor of digital payment systems.

Pushing a “convenience” narrative, some banks — seemingly unaware that CBDCs threaten their own future — are promoting the cashless agenda by offering high school debit cards that double as school ID cards, telling parents they’ll no longer have to “worry about lost lunch money.”

Fitts is a strong proponent of revitalizing the use of cash.

Parents can help by not only being cash role models themselves but by having their children “start handling cash when they are young.”

In 2015, Editor-at-Large Janet Bodnar of Kiplinger’s Personal Finance opined that “using cash is the best way to get young minds thinking wisely about money,” including older teens who can benefit from “the discipline of managing a stash of real cash.”

A British math expert told The Guardian in 2021, “Being able to handle money and buy something yourself is very special: it builds up your confidence with money.”

Over the years, many parents have learned to be wary of recommendations coming from the Centers for Disease Control and Prevention (CDC), an agency so accustomed to conflicts of interest and fake science that it is not embarrassed to use the same PR firm as Big Pharma.

Thus, calls for more mental health screening and greater access to “care” — from birth through young adulthood — by CDC and CDC/pharma front groups like the American Academy of Pediatrics deserve careful scrutiny.

As recently outlined in The Defender, cradle-to-grave psychiatric surveillance is a stealth tool for social control, and also risks stigmatizing and potentially life-threatening consequences like over-diagnosis, overmedicalization and overmedication.

Schools increasingly serve as the delivery mechanism for mental health screening and services, but as the Los-Angeles-based Citizens Commission on Human Rights (CCHR) — a mental health watchdog group — warned in a fact sheet, the “subjective and unscientific” mental health screening tools that schools are using are “developed by psychiatrists predominantly with financial ties to the pharmaceutical industry.”

Mental health screening asks young students embarrassing, personal and potentially upsetting questions that psychiatrists have worded in such a way that no student could escape being labeled mentally ill at some point during their education.

CCHR adds, “These questionnaires can result in psychological or psychiatric intervention in the lives of a child and his or her family — often against their will or under threat.”

For households that are not home schooling, the watchdog group recommends that parents become aware of what is happening, sign exemption forms prior to mental health screening or counseling and “unite to get psychiatric screening expelled from schools.”

In her Substack account of the Yale visit, Wolf described conversations with parents, who said “their children had begged them not to speak out, not to call the Dean, not to advocate for them to protect them from these injections, in any way,” due to the fear of reprisal and expulsion.

However, parents have a duty to make sure their young people understand what they are trading off for prestige — including, potentially, their health, their future fertility or their life.

Moreover, even if, as Wolf alleges, universities are now more beholden to government contracts than to those who pay tuition, college students and their parents still represent a powerful economic bloc capable of voting with their feet.

One tool at parents’ disposal, suggests Wolf, is to escrow potential donations to show universities the funds they are missing out on.

But parents who give their current or soon-to-be college students the permission and courage to shun any higher education institution that shows itself willing to poison them and deprive them of their constitutional freedoms can offer their children an even more powerful life lesson.

A high school student who recognized that “mandates will not end as long as we participate” developed a letter for college admissions offices (available as a template for others) that says:

At this time, I’m only considering schools, colleges or universities that do not require a Covid-19 vaccine and that would mean the initial series, any boosters and including upcoming requirements to be considered ‘up to date.’ Medical freedom and body autonomy are my highest priority.

Say no to the control grid

Although this article has focused on measures to protect young people, the control grid — in the form of interventions like digital IDs, vaccine passports and CBDCs — is also coming after adults.

As Kennedy wrote in the afterword to his bestseller, “The Real Anthony Fauci,” “We can bow down and comply … Or we can say no. We have a choice, and it is not too late.”

CHD.TV’s “Financial Rebellion” offers weekly suggestions on how to not comply.

We can say no to compliance with jabs for work, no to sending children to school with forced testing and masking, no to censored social media platforms, no to buying products from the companies bankrupting and seeking to control us. These actions are not easy, but living with the consequence of inaction would be far harder. By calling on our moral courage, we can stop this march towards a global police state.