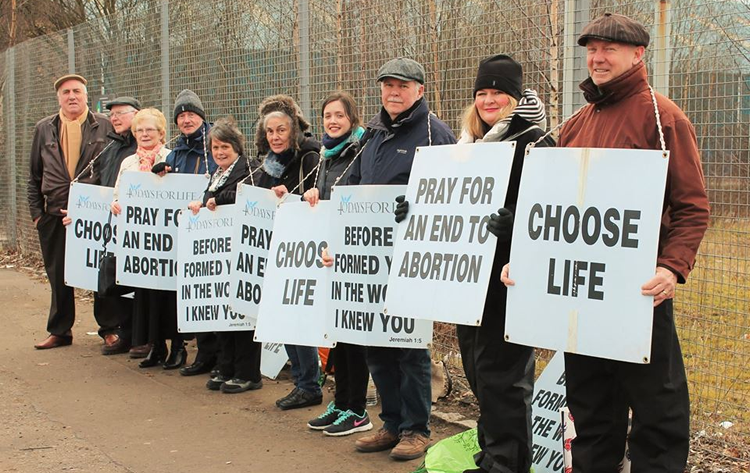 May 27, 2016 (40 Days for Life) — The 40 Days for Life campaign has been a feature in the United Kingdom for six years now. Clinics have closed, hundreds of lives have been saved and life has been breathed into the pro-life movement.

Abortion activists have openly acknowledged how effective the campaign is in their own terms. The witness of Christians has changed lives forever.

In Birmingham, nine lives were saved during the most recent campaign. The volunteers noticed a woman who was on her way in for an abortion appointment – crying. She chatted with one of the counsellors for a long time, and went home without having her scheduled abortion. Some days later, the team heard of another mother who’d chosen life for her baby. “Yet again,” Isabel the local leader said, “the couple had their abortion booked but changed their minds at the very last minute.”

New campaigns were started in Glasgow and Nottingham. A volunteer said to the Glasgow leader, “This is a major breakthrough for the pro-life movement in Scotland,” and “This is the best thing to happen to the pro-life movement for 40 years.” Another man said, “This is the first time the people of Scotland have had a chance to voice their opinion on this issue in a way that cannot be ignored by the powers that be, it is a historic time for pro-lifers in Scotland.”

Thousands of people came to witness outside the Queen Elizabeth Hospital in Glasgow, a hospital that spent a quarter of a million pounds pursuing to the highest court in the land two Christian midwives who contentiously objected to abortion.

In Wales, the prayer vigil has been faced with aggressive protesters for years. But this year, a man showed up to say he was sorry for being one of the protestors who harassed prayer volunteers a couple of years ago. Some young men have been unaware of the irony of using threatening language suggesting harassment of women, in front of women volunteers.

The man said three of his children have been aborted, and his aggressive behaviour was a reaction to the hurt he felt over the abortions. A 40 Days for Life campaign can be a vehicle for forgiveness and healing.

In Nottingham, there have been plenty of interactions with people, both positive and negative, all of them raising the profile of abortion services at the hospital, raising awareness of the humanity of the unborn child in the womb.

Many people who have come to the vigil have said how much they have enjoyed being together with people from other pro-life groups, and the core team goes from strength to strength. Bishop Patrick McKinney is supporting the campaign. “Pray always with compassion and gentleness to God for each person who enters and leaves the clinic,” he wrote, “and for all those who work there, that their hearts and outlook towards the aborting of babies might change.”

In Manchester, eight babies were saved that the team know of. On February 24, an 18-year-old university student wanting an abortion came with her mother, who wanted her daughter to keep the baby. After talking to a prayer volunteer, the daughter changed her mind. The mother was greatly relieved and said, “Thank God you people were here!”

On March 10, a pregnant lady looked very tense going into Marie Stopes. One of the volunteers said to her, “Ask to see the scan.” Finally they came out carrying a white envelope. The volunteer asked if it was the scan and she said, “Yes, and I’m keeping my baby.” She was pleased and grateful for the volunteers being there.

On March 1, a woman asked to see the scan and saw she was expecting twins. Her boyfriend wanted her to abort, but she didn’t. She was told by our prayer volunteer that we would be able to help her and contact has been made. On March 8, a mother thought she was 24 weeks pregnant and in fact the scan shoed she was 25 weeks. She decided to keep the baby and her partner was delighted. They kept in touch with the volunteers.

One of the very elderly volunteers, who was bedridden in the terminal stages of cancer, said about praying with 40 Days for Life, “It was the best thing I ever did in my life.” The volunteer has sadly passed away, but the witness in Manchester continues.

In Leamington Spa, after seven 40 Days for Life campaigns, the British Pregnancy Advisory Service abortion centre has closed its doors for good with no explanation, leaving the city without an abortion centre.

As we prepare for the next campaign, we thank God for these many blessings, as we anticipate many more as 40 Days for Life continues to thrive in the UK.