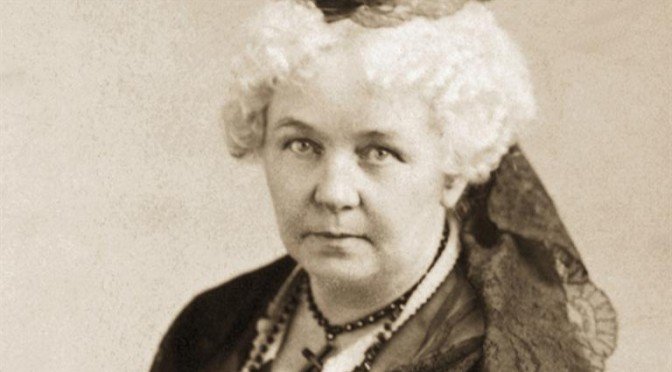 March 9, 2015 (LiveActionNews.org) – March is Women’s History Month, a time to remember the women in the past who worked and sacrificed to give today’s women many of the rights we take for granted.

Early suffragists such as Elizabeth Cady Stanton and Susan B. Anthony paved the way for women to become active in politics, but many people don’t know that the most outspoken, vocal, and influential feminists of the 1800s were pro-life.

Here are some quotes from early feminists on abortion:

Elizabeth Cady Stanton fought for women’s rights for over six decades. Active in the abolitionist movement and married to a prominent abolitionist, she became frustrated by the anti-slavery movement’s failure to include women as equals. Out of her discontent, and that of other feminists of the time, arose the Seneca Falls convention, widely known as the beginning of organized feminism in the United States. Stanton was an editor of The Revolution, a traveling lecturer, a leader of the national Woman Suffrage Association, and the devoted mother of seven children. Here is an excerpt from an article she wrote on infanticide:

There must be a remedy for such a crying evil as this. But where shall it be found, at least begin, if not in the complete enfranchisement and elevation of women?

Sarah Norton was a traveling lecturer who is perhaps best known for her activism aimed at winning admittance for women to Cornell University. She was a contributor to The Revolution, as well as other feminist publications. Here is an excerpt from an article in which she referred to a case where a woman died after her partner gave her poison to abort their child:

Here we find that a husband has been procuring poison for his wife and prospective offspring! Not with any wish to kill the wife perhaps, but as the chances are 5 to 1 against every woman who attempts abortion, he could not fail to realize the danger. Had this scheme been successful in destroying only the life aimed at, what could’ve been the man’s crime – and what should be his punishment if, as accessory to one murder he commits two?

Victoria Woodhull was the first woman to declare her candidacy for president in 1870 as a way of raising awareness for women’s suffrage. She made a speech in front of the U.S. Congress advocating suffrage, and was one of the first female stockbrokers on Wall Street. Woodhull and her sister started their own feminist newspaper wherein appeared an article entitled “The Slaughter of Innocents” jointly written by both sisters. From the piece:

… Wives deliberately permit themselves to become pregnant of children and then, to prevent becoming mothers, as deliberately murder them while yet in their wombs. Can there be a more demoralized condition than this?… We are aware that many women attempt to excuse themselves for procuring abortions, upon the ground that it is not murder. But the fact of resort to so weak an argument only shows the more palpably that they fully realize the enormity of the crime.

Read more of this article here.

Maddie Brinckerhoff was a popular lecturer in the Midwest who advocated women’s suffrage and other women’s rights causes. Because she spoke about the issue of “voluntary motherhood,” along with a number of other feminists of the time, her words have led to some confusion.

When early feminists use the term “voluntary motherhood,” they did not mean abortion or contraception. Rather, they were referring to the right of women to abstain from sexual intercourse in marriage, and the duty of men to respect women’s right to refuse their advances. In this way, they argued, women would have control over whether or when to be mothers. Brinckerhoff, who advocated voluntary motherhood, was against abortion and wrote in The Revolution:

When a man steals to satisfy hunger, we may safely conclude that there is something wrong in society – so when a woman destroys the life of her unborn child, it is an evidence that either by education or circumstances she has been greatly wronged.

Dr. Elizabeth Blackwell was the first woman to earn a medical degree. She was active in the suffrage movement and abolitionism. Here she describes the unborn baby and why it should be protected:

Look at the first faint gleam of life, the life of the embryo, the commencement of human existence. We see a tiny cell, so small it may be easily overlooked;…  it is a living cell; it contains a power progressive growth, according to laws, according, towards a definite type, that we can only regard with reverent admiration.

Leave it in its natural home, tended by the rich life of the healthy maternal organism, and it will grow steadily into the human type; in no other by any possibility.

In her diary, Blackwell wrote about of Madame Restell, a notorious illegal abortionist in New York:

The gross perversion and destruction of motherhood by the abortionist filled me with indignation, and awakened active antagonism. That the honorable term ‘female physician’ should be exclusively applied to those women who carried on this shocking trade seemed to me a horror. It was an utter degradation of what might and should become a noble position for women.

Dr. Lozier was another one of the first women doctors in America.  She was active in the fight for equal rights, and The Revolution published an article about what happened when she was approached and asked to perform an illegal abortion. The tone of the article also shows the way that Susan B. Anthony and the other editors of the Revolution regarded abortion:

Dr. Charlotte Lozier of 323 W. 34th St., of this city [New York], was applied to last week by man pretending to be from South Carolina, by the name, Moran, as he also pretended, to procure an abortion on a very pretty young girl apparently about 18 years old. The doctor assured him that he’d come to the wrong place for any such a shameful, revolting, unnatural and unlawful purpose. She proffered to the young woman any assistance in her power to render, at the proper time, and cautioned and counseled her against the fearful act which she and her attendant (whom she called her cousin) proposed.

What did Susan B. Anthony think about abortion? There is controversy. Anthony’s paper, The Revolution, published a number of editorials against abortion during its run from 1868 to 1872. According to the research of Mary Krane Derr, a lifelong member of Feminists for Life who wrote the book Pro-Life Feminism: Yesterday and Today, The Revolution refused to publish ads for abortifacients. In the late 1800s, pills and pessaries were sold by unscrupulous abortion practitioners through euphemistic ads, labeling these products as for “the remedy of illnesses peculiar to women, ” “restoration of female regularity” and “correction of menstrual suppression.”

These were products that were alleged to cause abortions in women who inserted or took them. The illegal abortionists who placed these ads would then offer crude surgeries to women when their products inevitably failed.

During The Revolution’s run, many newspapers and publications ran ads for such products, and such businesses proliferated even though abortion was technically illegal at the time (see reproductions of some of these ads that appeared in New York newspapers). These ads were lucrative for many newspapers of the time; however, Anthony and her colleagues steadfastly refused to accept them for The Revolution’s entire run.

Anthony is credited by some scholars with writing one of the most powerful anti-abortion articles ever to appear in The Revolution; however, the article was published with only her initial, leading some to argue that she was not in fact the author. The article, entitled “Child Murder” included the following:

Guilty? Yes no matter what the motive, love of ease, or desire to save from suffering the unborn innocent, the woman is awfully guilty who commits the deed. It will burden her conscience in life, it will burden her soul in death; but oh! Thrice guilty is he who, for selfish gratification, heedless of her prayers, indifferent to her fate, drove her to the desperation which impels her to the crime.

One can also take into account the circumstantial evidence. The Revolution published only editorials against abortion, and unlike other publications, it refused to publish ads for abortifacients. There is some other evidence for pro-life stance by Anthony, as well.

The prosecution on our courts for breach of promise, divorce, adultery, bigamy, seduction, rape; the newspaper reports every day of the year of scandals and outrages, of wife murderers and paramour shootings, of abortions and infanticides, are perpetual reminders of men’s incapacity to cope successfully with this monster evil of society.

Here we see that Anthony lumped abortion and with many other social evils. This may give some indication of how she viewed the issue.