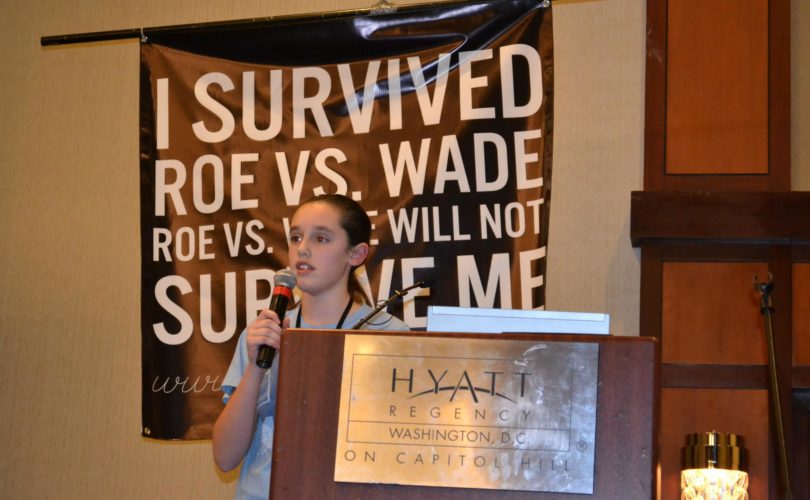 Stand True recently published a story about a mom telling her children about her past abortion.  Today we are sharing that story from one of her daughters about the day she found out. Zoe had been working on this story to e-mail to her mom when her mother walked in and told her to clean her room. That is when Zoe clicked send.

We had just dropped my brother and sisters off at Faith Formation. It was a Wednesday evening: January 8, 2014. I would be 13 in just over two weeks.

My mom said, “Zoe, I need to talk to you. Let’s go in the meeting room.” I thought we were going to talk about puberty. I got nervous and fidgety. “Mama,” I kept saying, “I’m not ready for this talk. I don’t want to know about it.” We got to the conference room and Mama sat down. I sat a few chairs away. “Sit here please, Zoe,” she said. “I don’t want to,” I whined. “Zoe,” she said firmly, “sit next to me.” I reluctantly sat down next to her, dreading what she had to say. What she said next would change my life forever. “Zoe,” she said, “in December of 1998, I had an abortion.” I felt like I had been slapped in the face. My whole world was rocked. I wanted to puke, I wanted to cry, I wanted to run away and hide. This amazing person, someone I have looked up to my whole life, my pro-life inspiration, had had an abortion.

“Do you have any questions?” she asked. “No,” I said. “Do you forgive me?” she asked. “Yes,” I said. “Your big brother’s name is David,” she said. Big brother. For years I had been saying, “I wish I had an older brother or sister!” Now I knew that I had one. We sat in silence for a while. Mama called Fr. Rossi, our parish priest, and he joined us in our little meeting. This was when I learned that a lot of people had heard her testimony before. He told us that now would be a great time to visit Jesus in Adoration. I was so thankful it was Wednesday! We went into Adoration and prayed. We prayed and prayed and prayed. I’m not sure what Mama prayed about, but I prayed for understanding about what had just happened. I prayed a Rosary for David, that he was in Heaven praising God. That night, when everyone was at home, my mom was on her computer. She had just let me read her testimony, which had been published online. Jackson, my 7-year-old brother, saw the picture of Mama holding a sign that said, “I regret my abortion”. “Wait,” he said, “you had an abortion?” Mama’s face paled. “Yes,” she said. Then, returning to his homework, he asked, “How do you spell ‘Guido’?” Mama went along with it. “G-U-I-D-O”, she said. “I’m done with my homework!” Jack said, and he rushed upstairs. Later that night, Lily and Bella, my two sisters, were downstairs. Jack came downstairs and said, “Hey! Did you guys know Mama had an abortion?” “No she didn’t,” Lily said, “she just got her tubes tied!” She turned to Mama. “Wait,” she said slowly, “did you have an abortion?” Mama then started to have the same conversation with them she had had with me earlier. Jack started crying and ran upstairs. Lily and Bella were tearing up, too, but they listened to Mama’s story. I followed Jackson upstairs. I found him in bed, his head buried in his pillows, crying. I sat next to him, held him, tried to comfort him. Mama came in and took over for me.

The five of us were all in one place, everyone crying except for me. We prayed a little together, and then we went to bed. I was shaken for the next few days. I will never forget that experience, but I am kind of glad it happened. I have taken the pro-life movement even more seriously than before.

I want to be able to say I avenged my big brother David by abolishing abortion, and I am confident that I am part of the generation that will do that.

This is what I was doing when you told me to clean my room.

We know how much abortion hurts men and women but we don’t often think of the sibling effect of abortion. I remember many years ago, a young woman approached my booth at a music festival. She explained how she had bought a pro-life t-shirt from me the year before and wore it home from the festival. When her mom saw the shirt, she decided to tell her daughter that she had had an abortion many years ago. They were able to seek counseling and the mother found healing as did her daughter. She thanked me for the work we were doing and bought another t-shirt.

There are some amazing resources for anyone who is hurting from abortion.

My daughter became a pro-life activist, but I couldn’t tell her I aborted her brother