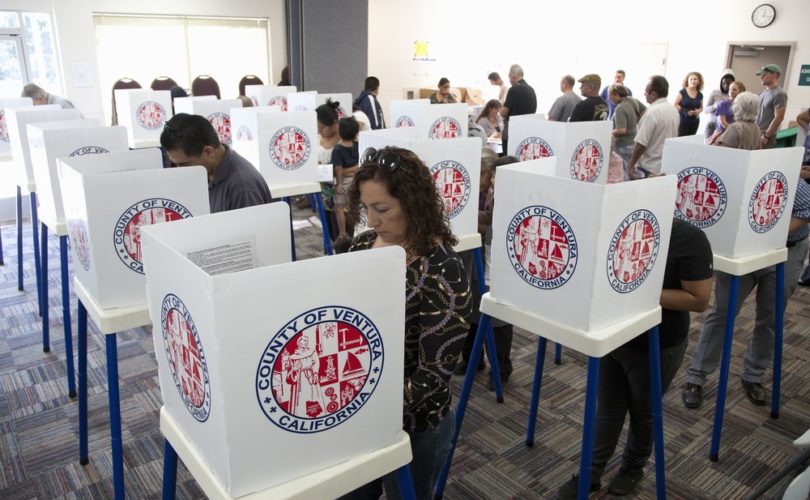 September 24, 2018 (Human Life International) – “The people are called on to take an always larger part in the public life of the nation. This participation brings with it grave responsibilities. Hence the necessity for the faithful to have clear, solid, precise knowledge of their duties in the moral and religious domain with respect to their exercise of their civil rights, and in particular of the right to vote.“ –Pope Pius XII, April 20, 1946, Discourse to Italian Catholic Action

With less than 50 days until the U.S. midterm elections, it is time we remind ourselves just how high the stakes of this election are, and what our duties are as Christian citizens.

In a country as populous as ours, with a government as large and seemingly remote as ours, we can easily fall prey to the temptation to believe ourselves just one tiny, insignificant number in a giant machine. “My vote doesn't really count,” we tell ourselves. And thus, we justify our own laziness, rationalizing our failure to research the issues at stake and where the candidates stand on those issues, and our failure to show up at the polls on election day.

The reality is, however, that the results of November's elections will impact every level of our society – from legislation, to judges, to the educational system, foreign policy, healthcare, and so much more. And though our vote is only one among millions, it nevertheless remains true that the accumulated weight of those millions of votes determines, in crucial ways, the future our country will take. This has never been truer than today, when there hangs in the balance grave moral and social issues: the status of marriage, the family, religious freedom, and respect for human life itself.

Pius XII: Voting is “An Act of Grave Moral Responsibility'

It might surprise some Catholics to learn just how deadly seriously the Catholic Church takes the duty to vote. The Catechism of the Catholic Church, for instance, outlines three duties that Catholics have to their countries: “to pay taxes, to exercise the right to vote, and to defend one's country…” (¶2240). These three, says the Catechism, are “morally obligatory.”

The Venerable Pope Pius XII, whom I quoted at the beginning of this column, frequently used even more insistent language than this. In a speech to the parish priests of Rome in 1946, for instance, Pius XII spoke of the exercise of the right to vote as “an act of grave moral responsibility,” at least in those cases where the vote pertains to electing politicians responsible for the country's constitution and laws. Such politicians, the pope observed, will directly affect issues such as “the sanctification of holy days of obligation, marriage, the family, schools and the just and equitable regulation of many social questions.”

In another speech, in 1948, the pope went even further, arguing that “in the present circumstances” any Catholic who failed to vote due to weakness or laziness committed “a sin grave in itself, a mortal fault.” These are stark words. And while the Church has not formally taught that the failure to vote is objectively a mortal sin, clearly Pius XII did not view failing to vote as a small, forgivable fault, at least in those elections pertaining to the country on a whole, or in which serious moral issues are at stake.

For, as the pope added, how can any Catholic “remain indifferent to the composition of a Parliament, to which the Constitution gives the power to legislate in matters that directly concern the highest religious interests and the conditions of life of the Church itself in Italy?” These words apply as much to the United States in 2018 as they did to Italy in 1948.

Pius XII was equally insistent, however, that if there is a duty to vote, this duty ought not to be exercised willy-nilly, but only in light of objective moral standards. While every Catholic must vote according to his conscience, said the pope, he is enjoined by strict duty to “give his vote to the candidates who offer truly sufficient guarantees for the protection of the rights of God and of souls, for the true good of individuals, families and of society, according to the love of God and Christian moral teaching.”

In other words, a Catholic cannot vote merely for the sake of voting, or according to blind party loyalty. A Catholic is a Catholic all the time, and is primarily a Catholic, rather than a member of a certain party, or even a citizen. As such, all Catholics must conscientiously educate themselves not only on the issues at stake in an election, and the stances of individual politicians on those issues, but also the moral teachings of the Church and how to apply those teachings in the voting booth.

There are numerous resources where Catholics can go to begin to educate themselves on how to vote as a Catholic. EWTN, for instance, has a comprehensive Catholic voter's guide (available here), while the U.S. bishops have also issued a document – Faithful Citizenship – that provides guidance on voting as a Catholic. Both of these resources emphasize that, above all, that Catholics must be aware that there are some actions that involve matters so grave, and on which Catholic teaching is so clear, that no Catholic can ever knowingly vote for a politician because that politician supports these actions. These are so-called “intrinsically evil” actions. When deciding how to vote, our research must begin with these issues.

“A prime example is the intentional taking of innocent human life, as in abortion and euthanasia,” notes Faithful Citizenship. Other examples include redefining marriage, destructive research on human embryos, human cloning, genocide, torture, the intentional targeting of civilians in war, “acts of racism, treating workers as mere means to an end, deliberately subjecting workers to subhuman living conditions, treating the poor as disposable…”

As Cardinal Ratzinger wrote in a 2000 statement from the Congregation for the Doctrine of the Faith: “When political activity comes up against moral principles that do not admit of exception, compromise or derogation, the Catholic commitment becomes more evident and laden with responsibility. In the face of fundamental and inalienable ethical demands, Christians must recognize that what is at stake is the essence of the moral law, which concerns the integral good of the human person.”

While it is true that Catholics may at times – alas, in our day and age, all too often! – be forced to choose between politicians who support some of these intrinsically evil actions, and to vote for the “lesser evil,” – i.e. the politician who is likely to do the least damage to the common good – these issues in themselves are non-negotiables. This is especially true in the cases of those evils – such as abortion – that constitute direct attacks on human life. For as St. Pope John Paul II repeatedly emphasized throughout his pontificate, a society that doesn't respect the fundamental right to life is incapable also of protecting other, lesser human rights. To deliberately vote for a pro-abortion candidate because of that candidate's support for abortion would constitute a grave sin, as would voting for a pro-abortion candidate when there is a viable pro-life alternative.

“Above all, the common outcry, which is justly made on behalf of human rights,” St. Pope John Paul II said in Christifideles Laici, “for example, the right to health, to home, to work, to family, to culture, is false and illusory if the right to life, the most basic and fundamental right and the condition for all other personal rights, is not defended with maximum determination.”

As Catholics, our duty is to lend our voice to the proclamation of the objective truth. As such, our loyalties must transcend party loyalties. This nation is divided on key moral issues – contraception, abortion, homosexual unions, divorce, co-habitation, and euthanasia – which this election will either help to heal or exacerbate. Our task is not to promote a political platform but preach the fullness of the Gospel of Life. For a Christian, politics is merely one area in which the truths of the Gospel may be made manifest in human life.

As the anonymous early Christian author of the beautiful “Letter to Diognetus” writes to his pagan interlocutor: “[Christians] live in their own countries as though they were only passing through. They play their full role as citizens, but labor under all the disabilities of aliens. Any country can be their homeland, but for them their homeland, wherever it may be, is a foreign country. … They live in the flesh, but they are not governed by the desires of the flesh. They pass their days upon earth, but they are citizens of heaven. Obedient to the laws, they yet live on a level that transcends the law.”

The author of this letter expresses his pride that his fellow Christians are not like their pagan neighbors. Though they look like their neighbors on the outside, and though they follow the customs of whichever country in which they are residing, their lives are lived on a higher level, their loyalties are higher loyalties. Unlike their pagan neighbors they do not expose their newborn babies to death, they do not commit adultery, they return a blessing for evil words, and they love those who persecute them.

Would that the same could be said for all Christians today! We Catholics in the U.S.  are not first and foremost Republicans or Democrats. Nor are we first and foremost Americans, or citizens of whichever country in which we happen to be living. We are citizens of a higher country, and though we diligently obey all the just civil laws in the earthly cities where we live, we are always beholden to a higher law, and where the law of the earthly city conflicts with the law of the heavenly city, our loyalty is unswervingly due to the higher law.

This is the spirit with which a Catholic approaches the voting booth – not to bolster the career of his favorite politician or political party, or to advance some purely temporal political scheme, but to make Christ present in the temporal order. As Cardinal Ratzinger put it, “By fulfilling their civic duties, 'guided by a Christian conscience', in conformity with its values, the lay faithful exercise their proper task of infusing the temporal order with Christian values…”

In this age of great upheaval, when critical moral issues are at stake, it is more incumbent than ever that Christians heed the exhortations of the Church not to renege on their duties as citizens; let us approach the voting booths in November armed with a clear knowledge of the issues and the moral truth, and let us pray fervently that the outcomes of the election lead to the protection of the true common good, above all through the protection of life, marriage, family, and religious freedom.