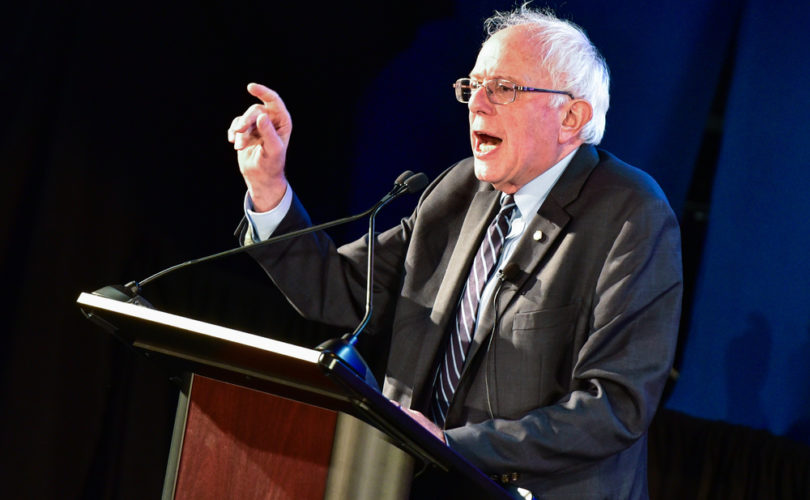 The truth is, the socialist from Vermont is at least as forceful a defender of killing preborn babies as the former First Lady. Crush Rush / Shutterstock.com

February 22, 2016 (LiveActionNews) — Planned Parenthood’s decision to endorse Hillary Clinton over Bernie Sanders has created quite the stir. Despite some backlash from supporters, Planned Parenthood maintains that “Clinton pushes harder” for abortion, and that nominating Sanders would be passing up on a “first time in history” opportunity to “elect someone who’s been fighting to expand reproductive health and rights for decades to the White House, just when we need that kind of champion the most.” Feminist luminaries Madeline Albright and Gloria Steinem even suggest “there’s a special place in hell” for women who don’t pick Hillary and that young women go to Sanders just to meet boys, respectively.

But don’t let the clear preference of abortionism’s leaders trick you into thinking Sanders is some moderate. The truth is, the socialist from Vermont is at least as forceful a defender of killing preborn babies as the former First Lady.

The tiniest facsimile of moderation Sanders can scrape up on the issue is claiming to “respect absolutely” the decision to not abort…respect that is undermined when in the same breath he calls being pro-life a hypocritical detour from wanting to “get the government out of my life,” and goes right out the window with his condescending accusations that men are only pro-life because we don’t want to get pregnant and dutiful fear-mongering that “the right-wing in this country is waging a war against women,” complete with dishonest fear-mongering that a pro-life future would mean “returning to the days of back-room abortions, when countless women died or were maimed.”

Beyond that, it’s full speed ahead for abortion-on-demand at any stage, for any reason, at your expense.

On his campaign website, Sanders makes a number of radical pro-abortion promises: that his every judicial nominee would not only uphold Roe v. Wade, but also “recognize the rights of women to have access to family planning services”—i.e., the courts would force private employers to cover potentially abortion-inducing drugs—and that he would force the American people to give even more of their tax dollars to abortion, Planned Parenthood, and abortifacient birth control, by “expand[ing], not cut[ting], funding for Planned Parenthood, the Title X family planning program, and other initiatives that protect women’s health, access to contraception, and the availability of a safe and legal abortion.”

His record as a congressman and then a senator backs those pledges up. From 1993 all the way to 2014, Sanders’s positions and congressional voting records have always gotten 100% scores from both Planned Parenthood and NARAL. So for the better part of two decades, Sanders has voted for every expansion and protection of abortion to come his way, and opposed every attempt to restrict it, no matter how modest or commonsense.

OnTheIssues and the pro-Sanders website Feel the Bern helpfully run down the highlights of his voting record, which include his votes for partial-birth abortion, late-term abortion, taxpayer funding of abortion both here and internationally, taxpayer funding for Planned Parenthood and other abortion providers, taking minors across state lines to get abortions without their parents’ knowledge or consent, allowing and expanding the destruction of human embryos in stem-cell research, abortifacient emergency contraception on military bases, and federal funding for the United Nation Population Fund’s pro-abortion agenda.

And his anti-right-to-life ideology dictates his position on more than just abortion laws—Sanders has also voted against the Unborn Victims of Violence Act, which recognizes wanted children as second victims of violence against their pregnant mothers; against recognizing preborn babies as eligible for low-income health assistance under the State Children’s Health Insurance Program (SCHIP); and against legislation protecting health providers from being denied tax dollars on the basis of their refusal to partake in abortion.

Apparently in Bernie’s world, when women get healthcare from someone who doesn’t also kill kids on the side, it’s not a critical need anymore.

Sanders was also a cosponsor of the 1993 Freedom of Choice Act and the 2013 Women’s Health Protection Act. The former would legislatively codify Roe into federal law by forbidding any state from restricting abortion pre-viability (and effectively post-viability via the infamous “health” exception); the latter would also do that, as well as federally eliminate and forbid virtually every state and local pro-life law in the country, including ultrasounds, waiting periods, admitting privileges, ambulatory transfer agreements, and webcam abortion bans.

Planned Parenthood likely chose Hillary Clinton over Bernie Sanders not because she’s one iota more pro-abortion but because of her status as a political elite, their financial chumminess, and a calculation she’s more electable. President Bernie Sanders would be every bit as stubborn as our current president on continuing the slaughter of the preborn, forcing our complicity, and tying our hands from doing anything about it.