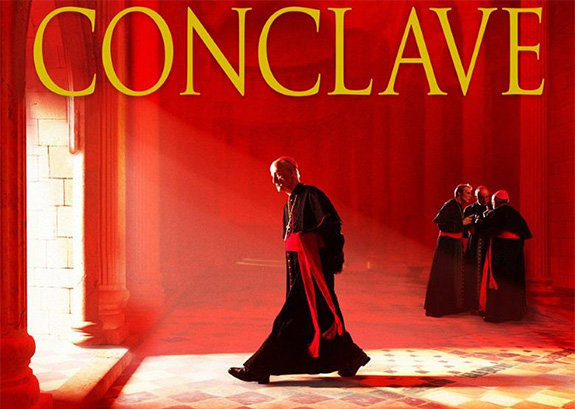 January 24, 2017 (Catholic World Report) — Conclave is a recent, best-selling novel about papal intrigue and Vatican politics that is stylistically several notches above Dan Brown’s malignant conspiracy-at-the-heart-of-the-Vatican mega-seller The Da Vinci Code. The book, written by British author Robert Harris, has enjoyed largely favorable reviews since its publication last fall, with the New York Times Book Review describing it as “a gripping, smart book” that “could become the Catholic version of The Satanic Verses,” and Kirks Reviews saying it is an “illuminating read for anyone interested in the inner workings of the Catholic Church; for prelate-fiction superfans, it is pure temptation.”

A former political journalist, Harris has written popular political thrillers including Enigma, Imperium and The Ghost, whose fictitious central character is a barely veiled version of former Prime Minister Tony Blair. Conclave exchanges the political wrangling of smoke-filled back rooms for scheming prelates in an incensed-filled Sistine Chapel. Beyond the Vatican walls helicopters hover while terrorists plot an attack. Within, the College of Cardinals is laced with enough IED candidates to blast apart any vestige of orthodox resistance to the progressive march of the Church under a reformist pope.

Harris notes that the Holy Father in Conclave is not Pope Francis, but readers will take his claim with a knowing wink; after all, Harris’ reformer pope lives in Santa Marta, not the papal palace.  The story gets off to a tense start amidst the turmoil following the sudden death of the pope. Even his loyalists cardinals are thrown into confusion by recent outbursts of papal anger, strange charges against a papal favorite, clandestine meetings and the rumor of an appointment en pectore. Their eminences are stunned by revelations that the pope had lost faith. Another insists, “Never about God! What he had lost faith in was the Church.” And over this brewing crisis looms the thundercloud of schism.

Harris is a practiced author and the novel is perfectly paced. Conclave speeds along, peppered with enough Vatican details to make it a plausible “thriller.” Harris isn't a believer, though he is politely respectful of the concept of God. But he does believe in the progressive view of human history; that is, we’ll eventually get this political power-liberty dynamic right and live happily ever after. The secular world of real power has no room for old fashioned orthodoxy. Harris has been critical of the Church’s teachings, saying the Church’s “attitude towards the ordination of women isn’t, I think, sustainable.” Thus, Conclave weaves progressive fantasies into a near future for the Catholic Church.

Primary characters underscore the progressive narrative. Mild-mannered Cardinal Lomeli serves as dean of the College of Cardinals and is a faithful “manager” for the pope. Perhaps what the world needs now is to catch its breath with a sympathetic, mild-mannered leader? His friend, the polished and urbane Cardinal Bellini, is the bookmaker’s favorite. Bellini is quite clearly an analog for the real life leftist, Cardinal Carlo Martini of Milan. Martini was the hope of many liberals when Cardinal Ratzinger was elevated to the papacy in 2005. In an interview given not long before he died in 2012, Cardinal Martini stated, “The question of whether the divorced can receive communion ought to be turned around. How can the church reach people who have complicated family situations, bringing them help with the power of the sacraments?”

Cardinal Bellini’s opposition in the novel is the top conservative prelate, a cartoonish warthog of man with disgusting table manners.  The imposing African Cardinal offers a telegenic diversity candidate. Ah! But, Cardinal Adeyemi of Nigeria is a hardliner on homosexuality and sexual ethics. Being black and African isn't politically-correct enough to overcome Adeyemi’s orthodoxy, so (predictably) Harris saddled him with a sexual indiscretion of his own. There is the Canadian Cardinal whose raw ambition is contrasted to the frail modesty of the Filipino Archbishop of Bagdad, the en pectore surprise candidate.

The plot swirls quickly through its seventy-two history making hours to the climax of the conclave wherein the Catholic Church is tricked by God himself —with the collusion of the late reformer pope—into elevating the unthinkable to the Chair of Peter.

An alert reader will suspect the coming twist at the conclusion, a groan-inducing, contrived anti-orthodox smackdown of biblical fidelity—delivered by God. A glance at the acknowledgements page sheds light on the matter, as the author credits a long list of Catholic dissidents and liberals for source material and inspiration. Among them is John Cornwall, the British author of Hitler’s Pope andThe Pope in Winter: The Dark Face of  Paul II’s Papacy. Cornwall wrote of “the harsh centralized rules of Wojtyla’s Church,” and he described Saint John Paul II as a “stumbling block” for “progressive Catholics and a vast, marginalized faithful.” Cornwall admitted that he lied about his reported access to secret archives when writing about Pius XII; his access was limited to years before 1922.

Also cited is American journalist John Allen of Crux for his own book titled Conclave (published in 2002), a book that detailed the mechanics of a papal election. Yet another British author, Austen Ivereigh, is listed for his biography of Pope Francis titled The Great Reformer. Ivereigh is increasingly seen as progressive for his trenchant defense of Amoris Laetitia, the exhortation that has caused confusion as some bishops have interpreted it as allowing  Communion to be given to those in illicit relationships. Other acknowledgements include laicized priest, John Peter Pham, author of the 2004 book Heirs of the Fisherman: Behind the Scenes of Papal Death and Succession. Others on the list include Peter Hebblewaite, a laicized Jesuit priest, and Marco Politi, author of Pope Francis Among the Wolves: The Inside Story of a Revolution.

Harris has said that Conclave took just seven months to write. Some of that speed is  undoubtedly due to the author’s skill and the fruit of years of writing. Yet, one cannot resist seeing Conclave as a fictional assemblage of the hopes and themes of the dissident writers listed in his acknowledgements. Add to these popular progressive dreams the expectation of a new conclave—Pope Francis has just turned eighty years old—and you have a formula for a timely papal “thriller.” After all, the next pope will be the leader of over a billion and half people in an increasingly polarized world.

However, an unexpected key to understanding the gushing praise from the United States for Conclave may be that it contains the all the architecture of the New Camelot that Hillary Clinton was supposed to deliver to America.  The systemic shock many liberals still suffer from that disappointment could well be part of this book’s allure: If American politics deny the New Camelot, perhaps it is Rome where progressive love, peace, and joy will finally reign.

Note, for example, how the Washington Post connects the dots: “Now comes Robert Harris’s splendid Conclave which centers on an election that, for the world’s 1.2 billion Roman Catholics, rivals the one that jolted the United States earlier this month: a papal election. We Americans chose a mere maker of earthly policy, but the Catholic cardinals will choose a new keeper of the Keys to the Kingdom.”

Harris’s novel envisions a new Catholicism—a Camelot Catholicism—not unlike T. H. White’s post-war recasting of the Arthurian Legend. Camelot, the Broadway 1960-63 musical was an adaption from White’s The Once and Future King.

White’s revision of the traditional Arthurian legend ridiculed a medieval hierarchy of loyal knighthood and chivalric sacrifice; his contemporary recasting of Arthur pilloried those knightly skills and trappings of military order. Such swagger would be unnecessary if gauche nationalism were vanquished by White’s unorthodox version of Arthur as an effete, visionary peace-broker. But, in their view,  that progressive dream dissolves in every era to warring mobs with a tenacious grip on their ties of kinship and culture. Still, progressives believe that they have glimpsed a better world:

“Don't let it be forgot
That once there was a spot,
For one brief, shining moment
That was known as Camelot.”

If in 2016 the enlightened lost their American shot at a new Camelot—a political fantasy of what life ought to be when they rule over the deplorable rabble—perhaps America is too small for their platform. Perhaps they hope and believe the gods of Progressivism will deliver Rome instead.