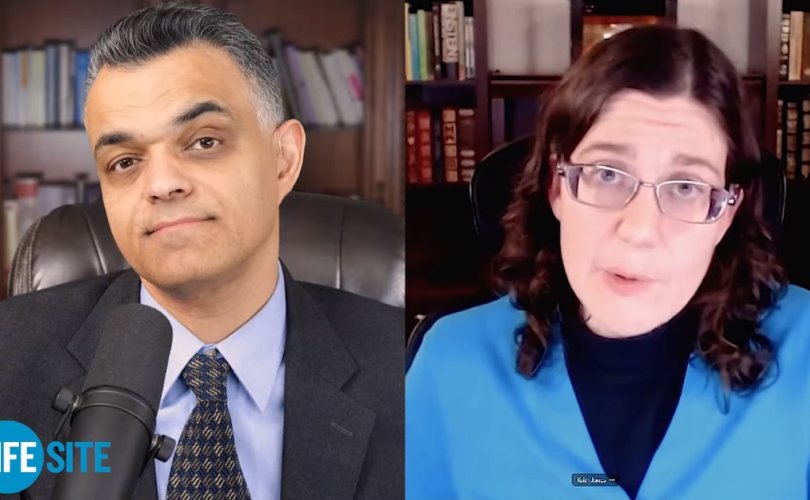 (LifeSiteNews) – For more than a year now, we Catholic laity have been subjected to all manner of opinions regarding the moral liceity of abortion-tainted vaccines from “experts” in the field of moral theology and bioethics.

We discussed the puzzling phenomenon of how we tend to have much greater regard for such credentialed individuals in a July 8, 2021, posting on our Tradidi Quod et Accepi website titled Perpetuating the Myth: Experts and the Application of Principles.

That piece was actually a rebuttal of an article written by Fr. Tadeusz Pacholczyk, Director of the National Catholic Bioethics Center in Philadelphia, which appeared in the April 21 edition of Today’s Catholic, the news outlet for the Diocese of Fort Wayne – South Bend, Indiana. The article in question can only be described as a hit piece on Pamela Acker, the Catholic biologist whose January 2021 interview by John-Henry Westen shocked the Catholic cyber world.  We submitted our rebuttal to the editor of Today’s Catholic in early July, but to date, as far as we know, it has never been published.

We have referred to Miss Pamela Acker often on our blog.  This courageous young scientist’s arguments are truthful, sound, logical, and thoroughly Catholic.  But in his article, Fr. Pacholczyk took issue with, inter alia, Miss Acker’s assertion that the development of the HEK-293 embryonic/fetal stem cell line involved the murder of far more than the “only” one baby murdered (supposedly) in 1973.  Fr. Pacholcyzk accused Miss Acker of using “overstated claims” to “ramp up a sense of outrage” for her audience.

In a March 21, 2021, analysis, we covered the hour-long interview that gave Fr. Pacholczyk such heartburn. You can watch the full LifeSiteNews interview that was banned from YouTube here. In it, Miss Acker puts to rest the myth that HEK-293, used in the development and testing of the Pfizer and Moderna COVID-19 “vaccines,” was derived from “only” one baby who, we have been told, was killed in 1973.  She explained that there were many more murdered babies required for development of that stem cell line:

[T]he HEK stands for Human Embryonic Kidney, but 293 stands for . . . the 293rd experiment that this particular researcher did to develop a cell line. And that doesn’t mean that there were 293 abortions, but for 293 experiments you need far more than one abortion. And we’re talking probably 100s of abortions. And, this was done with the collaboration of some hospitals. And there was a group in Sweden that was involved in developing the WI-38 cell line, so a different cell line, but they routinely were aborting babies for the use in trying to develop fetal cell lines.

Prior to writing our rebuttal to Fr. Pacholczyk in July, we consulted an article written by Pam Acker for LifeSiteNews dated February 19, 2021.  It is an excellent analysis of the whole issue of how many aborted babies it takes to produce (or maintain) a stem cell line.  The entire article is well worth re-visiting; but here is an example of her clarification of a rather technically difficult topic (at which she excels):

The assertion that HEK-293 was developed using only one aborted baby is equally imprecise. Frank Graham’s notebooks from his time at the University of Leiden are not published, but there are clues in other published research papers that his work involved more than just the final specimen from whom HEK-293 was derived. A paper from 2002, for example, discusses experiments done in HEK-218 and HER-224 (human embryonic retina), both of which were attributed to Mr. Graham and follow his naming scheme. At this time, it is unknown exactly how many babies were aborted for his research, and it will likely remain unknown to the public unless Mr. Graham decides to release his notebooks.

Fr. Pacholczyk would almost certainly have known of Miss Acker’s February 19 article before publishing his original hit piece in April; however, not satisfied with misleading Catholics in that article — in which he uses his credentials to give a false air of authority — he has doubled down on his accommodation with the COVID vaccine industry.  This time, in an article featured in the Catholic Sentinel, the official newspaper of the Archdiocese of Portland, Father tries to educate us on the moral/ethical difference between “new cures from embryonic stem cells” and “a COVID-19 vaccine developed using abortion-derived cell lines”. Father makes the following judgment:

The abortion, it should be noted, as wrong as it was in itself, was not performed in order to obtain research material, and the evil of this “corpse raiding” was compounded by not having obtained valid informed consent. . . . Directly killing someone to obtain their cells for treatment is different in kind and worse than the wrongdoing involved in taking cells from a corpse, even from a young human whose life was unjustly ended for an unrelated reason. It is always wrong to steal, even from a cadaver. But it’s much worse to kill in order to take.

Apparently, the reader is to conclude that even though abortion-tainted vaccines should not have been stolen, the babies (according to Father’s fable) were not killed for the purpose of medical research, so while it is still wrong to “steal from cadavers,” it is not nearly as bad as “directly killing someone to obtain their cells for treatment.”  Even though we know, beyond doubt, from such firsthand sources as the ghoulish Dr. Stanley Plotkin, that babies were (and continue to be) torn from the womb, tortured, and then murdered, all in the name of “medical research,” Fr. Pacholczyk’s fable goes like this:

. . . the researcher shows up at the morgue or the abortion clinic following the death and procures cells or tissues from the individual’s body (with the death having occurred at the hands of others and the researcher afterwards profiting from the resultant cadaver).

Even if that were the case, how does any vaccine or pharmaceutical derived from such immoral means become acceptable?  It is true that there are degrees of gravity of sin; but in what moral theology text or handbook is there a principle that allows for such bizarre reasoning and application as Father provides us in his missive? Hardly a week goes by without some new scandal regarding the use of ill-gotten “fetal” tissue being used in some Frankenstein-like way, as faithfully and regularly reported by Julie Collorafi. Yet, Fr. Pacholczyk would have us believe that because something is a “lesser of two evils,” so to speak, it somehow becomes acceptable. He compares, and contrasts “new cures” exploiting embryonic stem cells with COVID-19 “vaccines” developed with a stem cell line that itself required DNA/tissue from who-knows-how-many murdered babies, and he wants us to believe that the latter is somehow preferable and even acceptable due to sophistic reasoning that is simply wrong.  Why? Because an evil is still an evil and partaking of the ill-gotten goods of an evil is still an evil act.  The great moral theologians and Doctors of the Church have clearly explained that partaking of goods from an evil act makes us accessory to another’s sin.  It is one of the nine ways of being accessory to the evildoer’s immoral act.  Therefore, acceptance of abortion-tainted vaccines is not “remote material” cooperation in evil; it is partaking of and benefitting from a gravely sinful act.  But the bioethics expert, Fr. Pacholczyk, cannot or will not see this, for some reason.

Australian Michael Baker, whose insightful articles on various moral theology issues of the day can be viewed on his website, Super Flumina Babylonis, wrote an excellent analysis that appeared on the Family Life International website in late April that included this astute observation: “My experience in discussions with fellow Catholics is that the sensus fidelium on this grave moral issue is more likely to be found among the lowly faithful than among the ‘experts’.”  Like the sycophants who applaud the Emperor’s new clothes, these pseudo-experts gush over abortion-tainted vaccines, assuring themselves (and trying to convince us) of the moral acceptability of an evil that we should avoid at all cost.

We trust experts to design and build, safely, everything from public conveyances to road infrastructure and buildings. But, experts can be wrong — and often have been.  Think of all the times when a bad engineering design or simple lack of foresight resulted in catastrophic consequences.  After the two Space Shuttle disasters, and building collapses, and falling bridges, we always hear the same thing: “In retrospect, we should have noticed the faulty design.”  But even among the experts, there often rises a dissenter who should be heeded.  The words of Bishop Athanasius Schneider and his four brother prelates, who penned a stirring letter to the faithful a year ago, are more relevant than ever:

Some churchmen in our day reassure the faithful by affirming that receiving a COVID-19 vaccine derived from the cell lines of an aborted child is morally licit if an alternative is not available. They justify their assertion on the basis of “material and remote cooperation” with evil. Such affirmations are extremely anti-pastoral and counterproductive, especially when one considers the increasingly apocalyptic character of the abortion industry, and the inhuman nature of some biomedical research and embryonic technology. Now more than ever, Catholics categorically cannot encourage and promote the sin of abortion, even in the slightest, by accepting these vaccines. . . More than ever, we need the spirit of the confessors and martyrs who avoided the slightest suspicion of collaboration with the evil of their own age.

And like the little boy in the story of the foolish Emperor, Archbishop Viganò, Bishop Schneider, and the many prelates and priests who oppose being accessory to evil through acceptance of anything to do with stem cell lines from murdered babies, have courageously pointed out — despite the fawning experts — that the Emperor is in fact wearing no clothes.  Experts like Fr. Pacholczyk and Fr. Matthew Schneider of the “all OTC drugs were tested with HEK-293” deception will eventually have to answer for the great damage they have done to the consciences of Catholic faithful.

Meanwhile, one day — who knows when — our progeny will ask, “why didn’t the experts apply the basic principles of moral theology?”  That will be a blessed day!